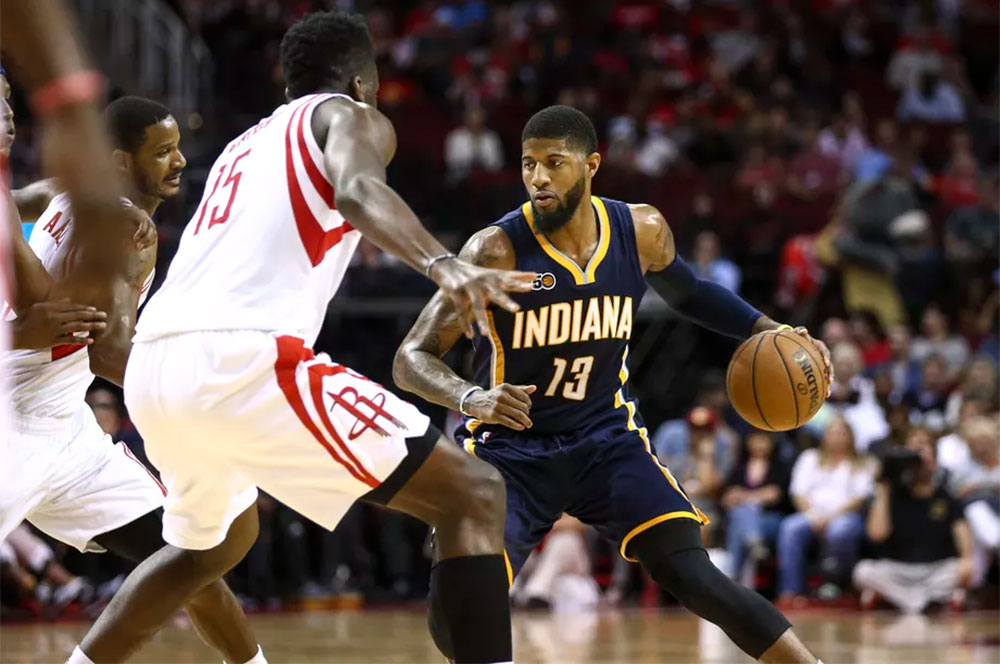 Indiana fell behind 18-2, but stormed back, topping Houston on the road. Jeff Teague scored 25 points.

The Indiana Pacers completed their season sweep of the Houston Rockets in impressive fashion, completing a 26-point turnaround with a total team effort. The Pacers fell behind 18-2 in a perplexing six minutes of unwatchable basketball, but responded well with the bench, drawing the game to within four. Houston appeared to regain control at the end of the first, closing on a 7-0 run and pushing ahead by 17 early in the second.

From that point, Indiana pieced together a 15-2 run over the next four minutes, allowing them to eventually take the lead into the break. The Pacers were just 7-17 in the first quarter in the paint, but went 10-16 in the second quarter, shooting 12 free throws in the second after zero in the first.

An oddity of a first half gave way to a more traditional third quarter with the teams trading leads until Indiana pushed ahead by eight on an 11-2 run to close the third. The Pacers opened up from three point range in the third, hitting five while the Rockets would struggle hitting (but not taking) threes themselves.

In the fourth, the Pacers kept their eight point lead, but failed to really build on it, allowing a 14-2 Rockets run late to draw within two points in the final minute. Indiana pushed the lead back to five on a C.J. Miles corner three from a head’s up pass from Paul George, helping to close out an impressive win.

Given Indiana’s recent struggles defending threes, each miss and the better contests was a sigh of relief, especially with the Pacers responding by hitting their own attempts. It helped make up some of the difference in being outscored at the free throw line 34-22, which given the first quarter gap, wasn’t a crippling difference.

Perhaps the most impressive part of the win was that Indiana was able to do so with limited contributions from George. George was hampered with foul trouble all night, wrapping up with 15 points on 5-16 shooting. He did, however, come through with some big plays late with the assist to Miles (as part of five) and a crucial rebound on the following possession (totaling seven).

The Pacers had six double figure scorers, but needed a big night from someone. Jeff Teague stepped up, scoring 25 points and shooting a perfect 12-12 from the free throw line, icing the game late. The guard play for the Pacers with a real positive as he along with Rodney Stuckey and Monta Ellis combined for 17 of Indiana’s 29 assists.

They also combined for 11 of Indiana’s 15 turnovers, but Ellis and Stuckey made some big passes, leading to a career night for Rakeem Christmas, scoring 10 points. For the third straight game, a second unit featuring Christmas has changed the game in favor of the Pacers, which makes things a bit more awkward in regards to Al Jefferson when he’s set to return.

In the backcourt, however, Stuckey scored 17 points, hitting a pair of threes while Ellis scored 12 with eight assists and seven rebounds. Glenn Robinson III only played nine minutes, but scored five on 2-2 shooting. Lavoy Allen’s shooting was a nightmare early, but he settled into a solid game on the glass, coming up with 11 rebounds.

Miles was the last Pacer to score, but his three second half threes were huge in setting the tone and closing out the win for the blue and gold. Myles Turner also got in the action, scoring 15 points with six rebounds and three blocks. Thaddeus Young scored eight.

The Pacers continue to frustrate, coming up with really good wins after eye-rolling losses. Indiana appeared dead on arrival in tonight’s game, but came together to turn the score in their favor. With George’s foul trouble, the Pacers had to limit James Harden by committee and while he did have 17 free throw attempts, he was held to just 5-17 shooting; a classic Harden-vs.-the-Pacers shooting night.

Tonight’s win was big to pick up, especially as the Pacers still have three games on this five-game road trip. Things don’t get easier, however, as the Pacers are set to face the San Antonio Spurs on Wednesday.