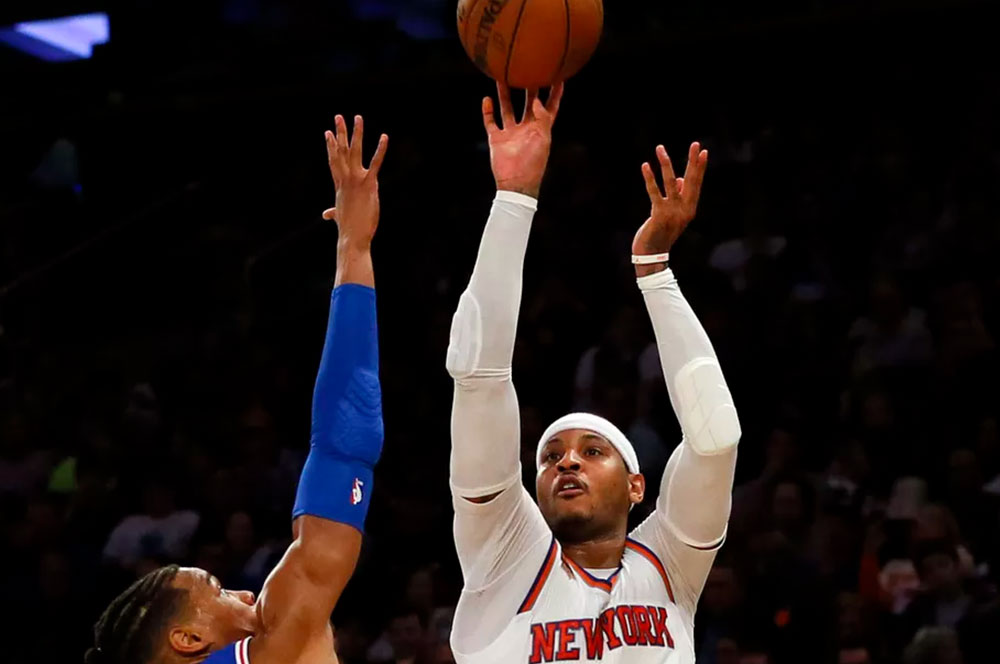 The worst thing about this game was constantly asking myself how the hell can we ever lose to Philly?

They're so damn terrible at basketball. Jahlil Okafor is not good, Nik Stauskas is, overall, not very useful and T.J. McConnell might be the worst player in the NBA. That’s not hyperbole — just watch him play, he’s embarrassingly bad.

For the better part of the game, the Knicks did exactly what you’re supposed to do when you play a team much worse than you (guys, the Knicks are definitely much better than Philly). Make more shots than them, get stops and control the pace of the game while they miss shots.

The Knicks did all of that...until they didn’t.

Just like that dreaded game from last month, the Sixers went on a huge run late to cut into an enormous New York lead.

I can’t even imagine the rapidly growing tank crowd being able to fathom losing to THIS Philadelphia team. They didn’t even have Joel Embiid! Indeed, NeedForShved’s wishes nearly came to pass, and the Knicks almost managed to out-tank the franchise famous for tanking.

Even without Kristaps Porzingis and Joakim Noah, this should have been an easy win. They led by 10 with four minutes to play and could hardly muster five measly points in the final five minutes of the game.

To make matters worse, their run was led by T.J McConnell and Jahlil Okafor, of all people.

I’m writing this recap as the fourth quarter is unfolding, and Melo just hit that shot. It looks like the Knicks are gonna win. Wait up, 0.3 left.

Ok phew. Wait, are they hitting the damn music at MSG? After needing a Melo buzzer beater to beat the Sixers? I obviously don’t understand how public relations work because that seems crazy to me, but whatever.

I guess the Knicks technically won this game, and I don’t think anyone should feel good about it. Squeaking by the Sixers is not good. For the tank crowd, this is even more frustrating. It ain’t easy loving the Knicks. Nope.

Sorry about doing two separate 180s in that game summary. I really was writing this as the fourth quarter played out and, well, I don't have to tell y’all what it looked like.

Let’s get to some notes:

— Derrick Rose: he was...aight?? He finished with 18 points on 8-17 from the field, 0-1 from deep and 2-2 from the line. He also grabbed 5 boards and made 3 assists. In general, he looked super unspectacular, but he was knocking down a lot of those short jump shots and that was nice to see. Again, his lack of assists is worrisome — his end-of-game "assist" was the product of some score-keeping home cooking — but I don’t think we’ll have to deal with that for much longer.

I haven’t done a recap in a few weeks so I haven’t had a chance to talk about that time Willy tried a three pointer against OKC. It did not work, but ohhh man, if he can start CHOF-ing those, he’s legitimately New York’s center of the future. If not, that’s still fine. He can stick around. We like Billy.

He scored 11 points, grabbed 9 rebounds and even blocked two shots. A double-double would have been cool but I think we’ll live with this. One of the nice developments in this sombre season is getting to watch Hernangomez blossom into a very good NBA big man. Now, you need KP to be in the lineup to get the full experience, but it was very nice to see he and Kyle O’Quinn play well.

Justin Holiday is the perfect role player and an excellent spot starter. Keeeeeep him.

He scored 14 points, grabbed 7(!!!!) rebounds and even blocked 2 shots. Like Joe said, he does just so many things so well. He’s a great athlete, can get hot from deep and is one of those defenders that disrupts lanes so well because of how long his arms are. He played just as many minutes as Courtney Lee did, and played much better, as well. We like Lee, he’s fine for what he is. But, it’s nice to have someone like Holiday come off the bench to supplant him (or whomever else is manning the 2). He’s a good piece to hold on to for next year.

Anyway, Melo managed to drop nearly 40 points shooting under 30% from behind the three point arc. That’s pretty remarkable. Yes, these are the 76ers, but Melo has performances like this one quite regularly. It’s always nice to see clutch Carmelo.