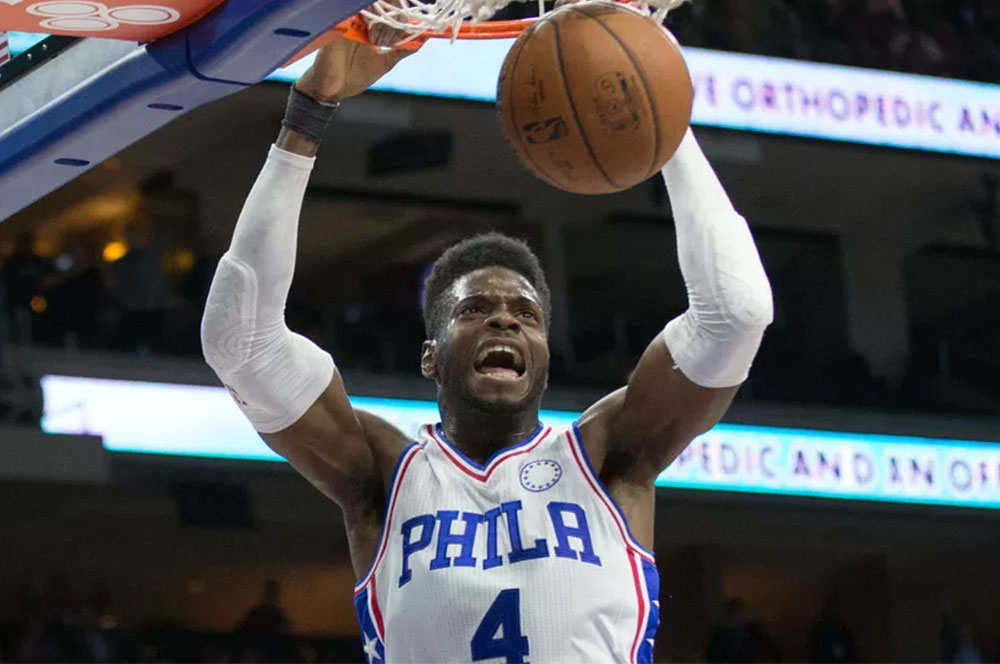 Dallas had no quality young players this time last year. Noel is just the latest the Mavericks have added opportunistically since then.

We’re less than two years removed from DeAndre Jordan verbally committing to the Mavericks, second-guessing his decision, and ultimately re-signing with the Clippers in a deluge of tweeted emojis and chicken fingers. That debacle left Dallas scrambling to even field a 15-man roster, leaving them without young talent and unsure how they would course correct. With the post-Dirk Nowitzki era looming, there was no smooth path leading them there.

Twenty months later, after trading for Nerlens Noel at Thursday’s deadline, you can safely say the Mavericks found one.

Nowitzki isn’t out the door yet, mind you. He wants to play one more season, which is why Dallas has resisted tanking and are still pushing for a playoff spot despite a 4-17 start and a loaded 2017 draft. The Mavericks see the Noel trade as one that helps them in the short term. After all, they only gave Andrew Bogut, Justin Anderson, and what will likely turn out to be two second-round picks in the next two drafts.

But the Mavericks traded for Noel wanting him as a part of the future, too. They plan to give him the massive contract he’ll command, even if it’s close to max money. Because he’s a restricted free agent, the Mavericks are guaranteed a chance to keep him regardless.

Noel is joining a young core the Mavericks have built out of nothing the past two years.

There’s Harrison Barnes, who’s 24 years old and blossoming into a consistent and efficient 20 points-per-game scorer. There’s Seth Curry, the 26-year-old younger brother of Stephen who’s finally carving himself a role in the league. Dorian Finney-Smith is a 23-year-old who took Anderson’s spot in the rotation this year, and even rookie sensation Yogi Ferrell is showing promise — as a backup point guard, if nothing else.

Those four players and Noel — with Nowitzki, as long as he’ll stay around; with a 30-year-old Wesley Matthews finally fully recovered from an Achilles rupture; with a probable lottery pick in this year’s draft that could yield a point guard of the future — form a team that’s young and are a solid bet to make the playoffs for the coming few seasons.

No, the Mavericks can’t compete with the top of the West yet, but they can keep working on that. There won’t be a tumble to the bottom when Nowitzki hangs it up, and his final season — whenever it comes — will be with a competitive roster. Next year’s Mavericks should be in the thick of the postseason hunt at least.

To think that the best player under 27 on this team a year ago was, who, Dwight Powell?

Why Philadelphia ceded Noel so easily is a mystery.

Especially given that Jahlil Okafor seemed like a much more plausible player to trade. But that’s a separate story.

In Dallas, Noel will fit much like Tyson Chandler did in the past. That’s an easy player comparison to make, given Noel’s all-around defensive skills and increasingly efficient finishing around the rim even if he’s a couple inches shorter. Here’s a taste from Noel’s best game this season.

Noel became one of nine players to ever average at least 1.8 steals and 1.9 blocks in his rookie season. (His minutes have been cut drastically this year due to positional overload, but Noel’s per 36 minutes numbers would be 2.7 steals and 1.7 blocks). He’s only an average rebounder as a center, but his other work defensively makes him a clear plus on that end.

Add an improving offensive game without glaring free throw problems (68 percent this season), and Noel could quickly become the best center in Dallas besides Chandler in at least a decade.

Remember: he’s only 22. This view may be a bit optimistic, but it’s not too far off the mark.

There are concerns. Noel has an injury history, missing his entire rookie season with a torn ACL that required 18 months to fully recover from for reasons that have never quite been explained. Noel’s played 171 NBA games since then, but he did have another minor knee operation before this year.

The Mavericks aren’t just trading for Noel, but his looming contract, too. Dallas wouldn’t have done this deal if they weren’t comfortable paying him at least $75 million this summer, but that’s still lots of cash for a center who will never been a top offensive option. Noel doesn’t have the cleanest record off the court, too — he’s been dinged at least once for a rental house situation.

Still, Dallas hardly gave up a king’s ransom for him, and athletic two-way big men are still rare. The Mavericks’ combination of big moves and value bargains has beefed up a roster going nowhere into one that matters again in the West. That was an easier task when the team had a younger Nowitzki, who would make anyone the team signed better and smooth over a roster’s flaws, but the climb back is doable.