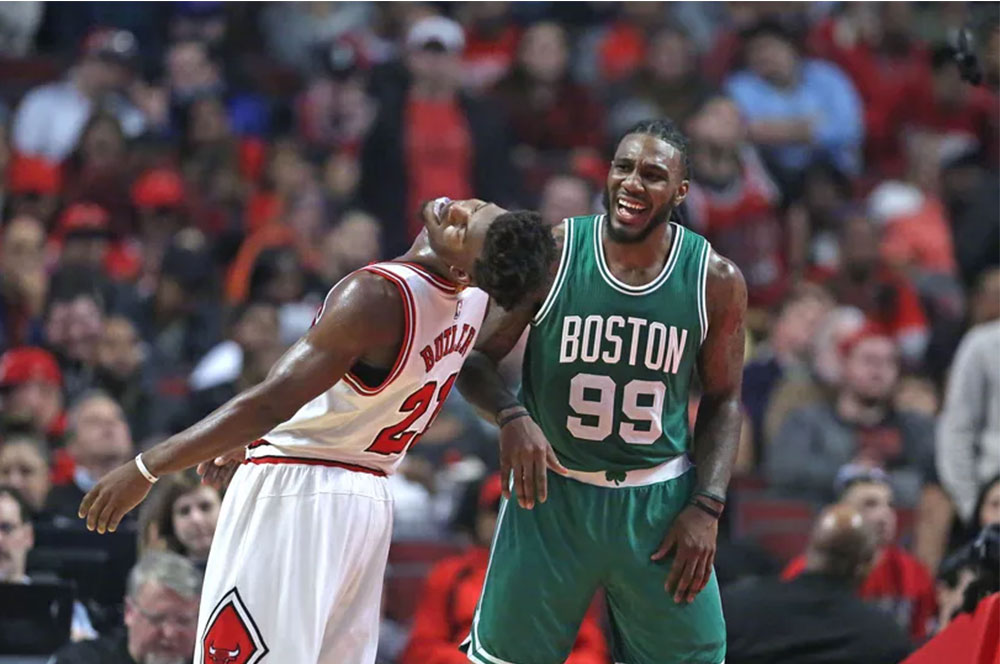 The Boston Celtics and Chicago Bulls are hung up on a potential trade for All-Star swingman Jimmy Butler, according to NBA.com’s David Aldridge. The snag in the deal stems not from the draft picks, but from Boston’s unwillingness to move starting forward Jae Crowder, Aldridge reports.

“I think, the main sticking point there is that (Ainge) just does not want to give up Jae Crowder in a deal, and that's the guy that Chicago's insisting on right now in any package for Jimmy Butler,” Aldridge said on NBA TV. “Chicago, I think rightly, are saying 'You want our best player, we're not just going to do it for picks. We're not just going to take guys that you're not gonna keep on your roster. we want a guy that's going to be able to grow with us along with high picks.”

The Bulls want a valuable rotation player along with high draft picks in any trade package for their All-Star swingman, and Celtics general manager Danny Ainge has been unwilling to part with Crowder, who is a core piece to their successful season to date.

It was long believed the Bulls’ desire to trade Butler hinged on Boston’s willingness to move the Brooklyn Nets’ first-round pick in the upcoming draft. But Aldridge said he believes “the picks will work themselves out.”

Most importantly, Boston can swap first-round picks this year with the Nets (9-47), who are on pace to have the highest odds at landing the top pick in 2017’s deep draft.

But a high draft pick and young, unproven prospects, according to Aldridge, isn’t enough for Chicago to part ways with their two-way wing.

Why it makes sense for the Celtics to hold the line

Crowder is averaging 13.8 points and 5.2 rebounds per game and has significantly improved his shot from distance, hitting the three-pointer at a 41 percent clip. Moreover, he is Boston’s most physical defender at the forward position, something the team values for its potential playoff battles against LeBron James and the Cleveland Cavaliers.

A midseason trade for a core piece like Crowder could disrupt a Celtics’ chemistry that has landed them at the East’s second seed behind just Cleveland.

“Danny would like to go in the playoffs with Smart, Bradley (and) Crowder defensively, along with Butler, (Al Horford and Isaiah Thomas) offensively,” Aldridge said. “He feels like that's the only way they're ever able to compete with Cleveland.”

Why it makes sense for the Bulls to push for Crowder

Chicago has attempted to move Butler several times in the past, including twice over the summer. The 27-year-old forward is averaging a career-best 24.5 points, 6.3 rebounds, and 5.0 assists per game. Butler was also named an All-Star starter this season for the first time in his career.

The Bulls, however, have declined to name him their franchise player and the organization has been split on whether to build around Butler or trade him to facilitate a rebuild.

Chicago would likely receive one of either Amir Johnson or Tyler Zeller’s expiring contracts, as well as one of either Smart or Brown in return for Butler. Add a high draft pick, and the return is ideal, given Crowder’s inclusion in the trade.

Probability a deal gets done

The Bulls want to move Butler and the Celtics are interested in acquiring him. The stars are aligned for a deal to get done. For that reason, there’s a 50 percent chance a trade goes down by the Feb. 23 trade deadline.

Ainge won’t pull the trigger on a trade, though, if he doesn’t feel it makes the team better. And while acquiring an All-Star player has its benefits, it could inhibit the Celtics’ future flexibility while costing them the valuable Brooklyn pick.

Regardless, the two sides want to get something done. And if Chicago truly wants to move on from the Butler era before the end of the season, they’ll find a suitor, Boston or not.