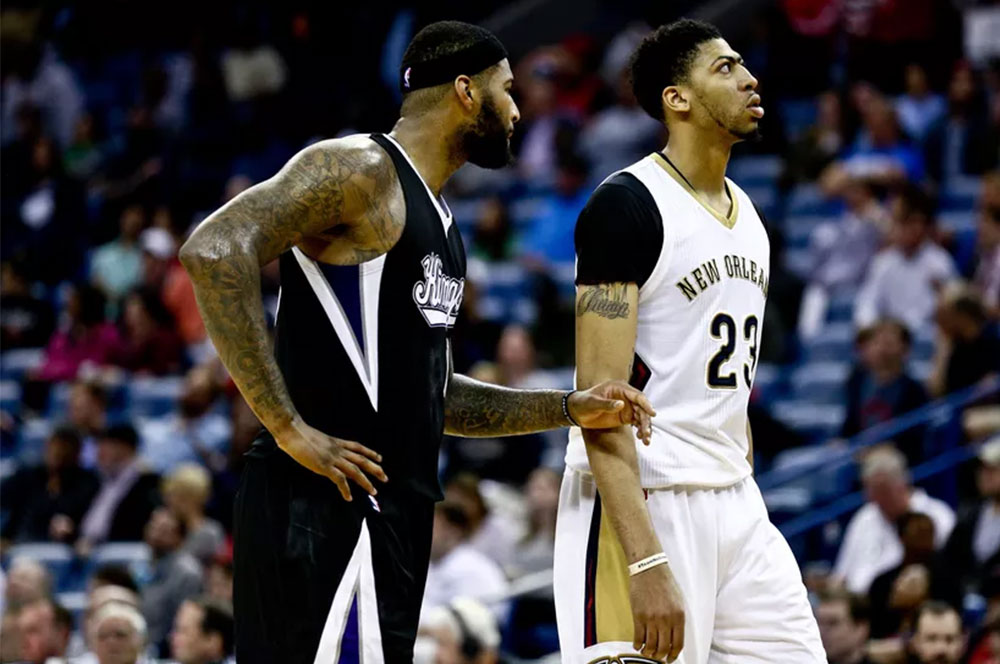 This is really happening.

The Sacramento Kings have traded three-time NBA All-Star DeMarcus Cousins and Omri Casspi to the New Orleans Pelicans. In return, the Kings receive rookie guard Buddy Hield, Tyreke Evans, Langston Galloway, and a 2017 first-round pick and second-rounder (via Philadelphia), according to The Vertical’s Adrian Wojnarowski.

The trade pairs Cousins with another All-Star big man in Anthony Davis, creating the most formidable four-five combo the league has to offer. It signals the ninth-seeded Kings’ concession of the Western Conference playoff hunt, though they’re just 1.5 games behind the eighth-place Denver Nuggets.

The deal also propels the 11th-place Pelicans, just 2.5 games behind Denver, into arms-reach of the postseason.

Cousins’s trade came days after the Kings denied trade speculation, according to the Sacramento Bee’s Jason Jones. Sacramento also reached out to the Los Angeles Lakers for a deal involving Brandon Ingram, according to The Vertical’s Adrian Wojnarowski, but the Lakers refused to include their rookie wing.

Boogie made his third All-Star appearance over the weekend, entering the break with averages of 27.8 points and 10.6 rebounds per game. But he also entered the All-Star Game with a league-leading 19 technical fouls, a trend that has followed the Kings’ big man for his entire career.

Cousins becomes an unrestricted free agent at the end of the 2017-18 season. His agent told ESPN.com it would be “highly unlikely” the All-Star big man re-signs with the team that trades for him.

What the Kings get

Sacramento gets what it has yearned for in recent years: clarity.

Without Cousins, the Kings can start building toward the future, painting the franchise’s trajectory onto a blank canvas. The Pelicans’ first-round pick will likely fall in the lottery range depending on how successful the team is in the second half of the season.

Hield is averaging 8.6 points per game on 36.9 percent shooting from three-point range. The rookie guard could become an integral piece to the future of the franchise, having shown blips of a potentially potent perimeter scorer.

Galloway has been a serviceable three-point shooter, but the Kings are expected to waive the 6’2 guard before he plays a game.

Evans is a capable ball-handler and finisher, one the Kings selected fourth overall in the 2009 NBA Draft. His $10.2 million contract expires at season’s end when he becomes an unrestricted free agent.

What the Pelicans get

Cousins’s resumé speaks for itself.

The Pelicans had reportedly reached out to the Indiana Pacers about acquiring Paul George in hopes of putting some talent around their franchise centerpiece.

Instead, New Orleans gets an all-world talent — the league’s most dominant inside-scoring big man — to pair with another. Cousins and Davis, both products of Kentucky, are skilled offensive bigs, each with the capability to handle the ball and create their own shot.

And while they lose their first-round pick in the upcoming draft, a Davis-Cousins tandem is certainly the foundation to build on top of.

Boogie undoubtedly comes with baggage. He’s a quick-tempered, emotional player who already has 19 technical fouls midway through the season. But with a healthy Jrue Holiday selflessly running the show and head coach Alvin Gentry pulling the strings, New Orleans is poised to make a playoff push behind its two superstar bigs.