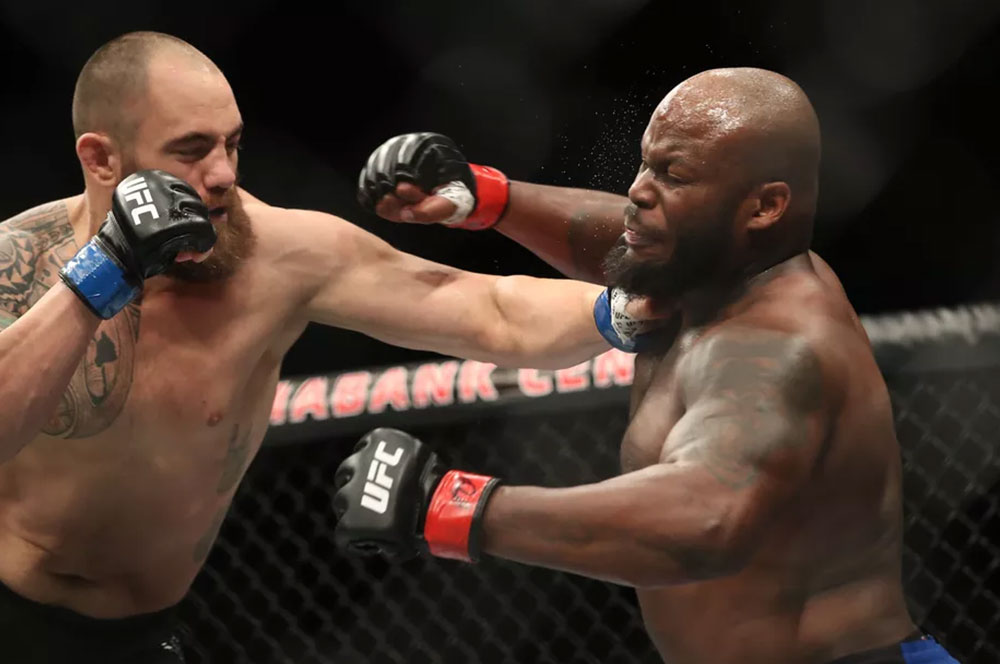 Derrick Lewis had an interesting post-fight interview after he knocked out Travis Browne at the main event of UFC Halifax.

Derrick Lewis had an impressive come from behind victory at the headliner of UFC Halifax, knocking out Travis Browne in the second round. He picked up his 6th straight win, then took the mic for a pretty interesting post-fight interview with Brian Stann.

When asked about the kicks to the body that he struggled with in the opening round, Lewis claimed he wasn’t truly hurt at all.

When speaking about overcoming that to get a knockout, Lewis brought up Browne’s domestic violence allegations from his ex-wife and his following relationship with Ronda Rousey.

“I just knew I had a bigger heart than him,” Lewis said. “He calls himself a man, but he likes to put his hands on women. So, forget that guy. I got much more heart than he has. Where’s Ronda Rousey’s fine ass at?”

Lewis ended by saying he will need a bit of rest after fighting 5 times in the past year.

“I need a break. I feel like I just need some time off,” Lewis said. "I don’t want to hear nothing about not fighting in the next three months. For sure (I was overtrained). Plus, all the training and all the sex I’ve been getting, my body needs some time off.”

“Canada! I love you guys. Hey, I’m from Texas, I’m not with all this snow, man, you all can have this shit.”

During the post-fight press conference, Lewis doubled up on his statements, thanking referee Mario Yamasaki for the late stoppage.

“I appreciate it,” Browne said about the stoppage. “Where (Yamasaki) at? I appreciate it, I appreciated him letting the fight go a little longer than what it should. I just wanted to get my anger out on Travis’ face because he likes to hit on women. So I appreciate him for doing that. I keep it real.”