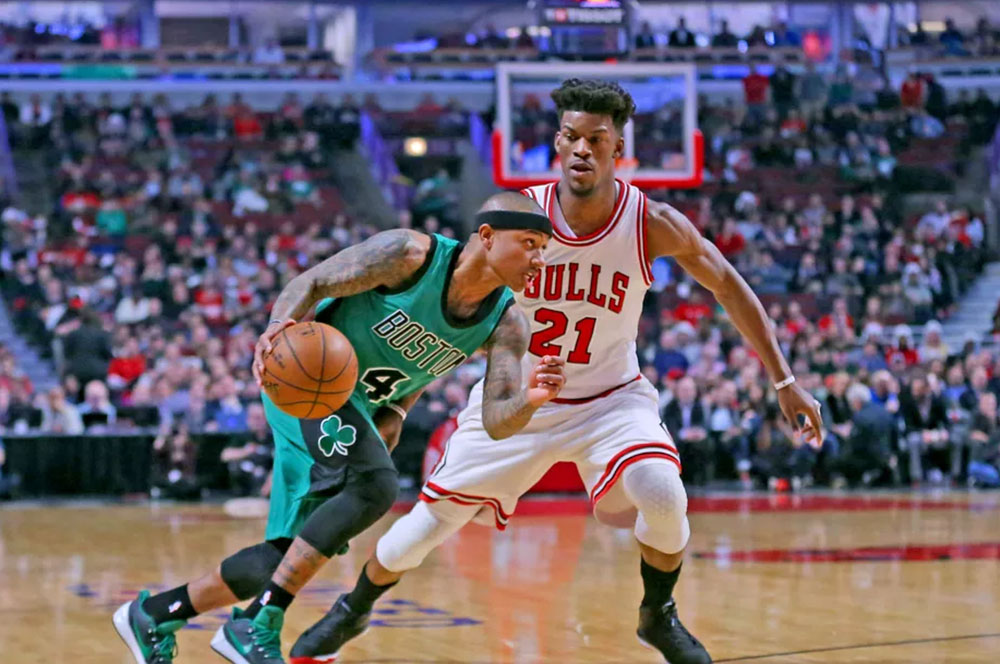 After a welcome-home win against the Toronto Raptors on Tuesday, Chicago closed out the pre-All Star break NBA season with a 104-103 victory over the Boston Celtics. The game featured a battle between two of the East’s biggest stars that went down to the wire, and the call that decided the game is one that will spark quite a bit of controversey for those wary of “Star calls” and NBA officiating in the closing seconds of games.

Unfortunately for the Bulls early on, the difference between the two teams proved to be their star players. Isaiah Thomas only scored two points in the first period, but did have five assists to keep the Celtic offense humming until the final minutes. Conversely, Jimmy Butler shot 2-7 from the field while playing all of the first twelve minutes, scoring only five points. Though the eye test would have told you the Bulls were getting outclassed early on, a late rally allowed the quarter to end with the home team down only 25-22.

Doug McDermott tied the game immediately with a three on the first possession of the second quarter, but the Celtics countered the Bulls over the next six minutes with lethal 3-PT shooting from James Young and yfBB’s favorite Celtic Terry Rozier. By the end of that stretch, the Celtics had rallied from 3-9 perimeter shooting in the first period to 8-15 from distance, including five in a row. Fortunately, Jimmy Butler rallied from his first quarter troubles to score ten points the rest of the way and bring his assist total up to five. Bobby Portis also went on to play his best offensive half of basketball all season, scoring 13 points off the bench on a very efficient 5-8 shooting (although he did travel twice). The Bulls had cut the lead down to three before a ridiculous Isaiah Thomas-two-for-one three boosted the deficit to six points prior to the end of the half. As a result, both teams headed to the locker room with the score favoring the Celtics 58-52.

Jimmy Butler and Jerian Grant came out for the second half hot from three, giving the Bulls back the lead about four minutes into the third quarter. The Bulls would then go on an 11-3 run that lasted the next five minutes and allowed Chicago to build a 75-68 lead with three minutes remaining. The Bulls were killing the Celtics on the offensive glass at this point, with a 12-3 advantage at the conclusion of the quarter. Boston would rally the rest of the way with strong offensive play from Kelly Olynyk, but Bobby Portis countered with some baskets of his own to keep the Bulls in front 81-77 entering the final quarter of play.

This season, Isaiah Thomas has been the leading 4th-quarter scorer in the NBA with over 10 points per game, and the Celtics have subsequently been one of the league’s best 4th quarter teams. The Bulls, on the other hand, have been one of the very worst under the same circumstances. You can probably guess what happened next. Thomas proceeded to reach 29 points with a minute and a half remaining in the game, but Jimmy Butler and a plethora of Celtic fouls managed to do just enough on offense to keep the Bulls within one possession going down the stretch.

The Bulls made some great defensive plays on the Celtics’ final possessions to keep within a basket of winning the game, including Jimmy Butler making a fabulous recovery to reject Isaiah Thomas at the rim. After grabbing a rebound after a missed Thomas three, Fred Hoiberg called a time out to draw up one final play in regulation. A play that would have TNT Thursday-streak-saving pressure resting on it.

Jimmy Butler would hit both of the ensuing freethrows to give the Bulls the lead, and Boston would entrust Al Horford with the game-deciding shot only for him to miss a long two. The Bulls emerged victorious to the tune of a 104-103 victory.

Butler finished with 29 points on 9-20 shooting and made two of his five three point attempts to go along with seven assists and the aforementioned block in the final minute. Bobby Portis finished the game as the Bulls’ second leading scorer with 19 points on an extremely efficient 8-13 shooting from the field. Rajon Rondo scored zero points but added some key assists and boards off the bench with eight and seven, respectively. The Bulls finished the game by outrebounding the Celtics 15-4 on the offensive glass.

The Celtics played pretty well in this one, shooting a ridiculous 37 three point attempts but knocking in 14 of them as a team. Isaiah Thomas finished the game with 29 points (11 in the 4th quarter), and Kelly Olynyk added 17 points and 7 rebounds off the bench. Given how efficiently they played on the road and this being the final NBA game before the All Star break (not to mention the call on Marcus Smart at the end), this is one of their more painful losses this season.

The Bulls will be one game off of .500 and a game behind the Indiana Pacers for the 6th seed in the Eastern Conference when they return from the All Star break. Until then, enjoy All Star Weekend and look out for Jimmy Butler to start in Sunday’s All Star game! Be sure to catch the dunk contest too to see what wacky thing Aaron Gordon vaults over this year!