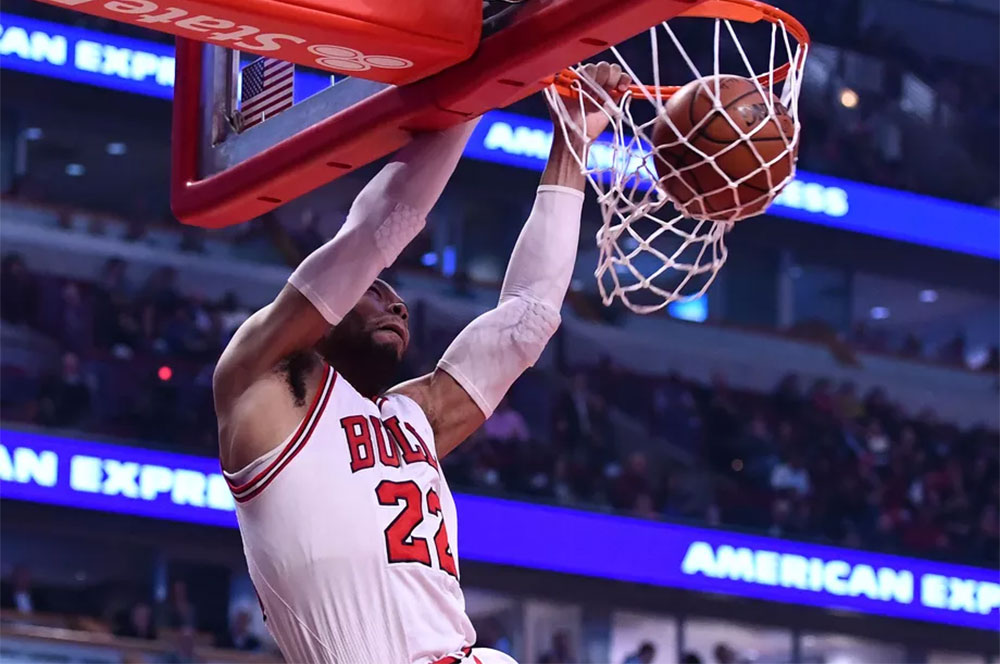 Jimmy Butler returned to the court and promptly put on an offensive showcase, even without a working jumper.

It happened again. Somehow, some way, it happened yet again.

No Dwyane Wade, no Nikola Mirotic, no Paul Zipser, no problem! The Chicago Bulls returned to the United Center from their Western Conference road trip this evening and managed to pull off their eleventh straight victory over the Tortrashto Trashtors in a 105-94 victory.

I do not know how or why the Craptors keep allowing this to happen to themselves and quite frankly I do not care. The last time Tortrashto beat Chicago, Luol Deng led the Bulls in scoring and Jimmy Butler was only averaging two points per game. Serge Ibaka’s arrival will almost certainly make them a better team as he gets acclimated with the squad, but he wasn’t there tonight and the Bulls made their opponents pay for their recent complacency.

The second quarter started with a Doug McDermott technical foul. That was about the last bad thing anyone on the bench did for an extended stretch, as the opening six minutes of the quarter saw four bench-Bulls reach five or more points. Felicio and Rajon Rondo in particular scored very well, which took pressure off of Butler and allowed him to focus on other areas of the game such as facilitation (seven assists) and playing the passing lanes on the other end (four steals). The bench tandem continued to play brilliantly through the end of the half, doing an excellent job of pushing the pace and setting a high-energy tone on the glass. The Bulls went on to score 34 points in the quarter, and the (C)Raptors simply couldn’t match their intensity on either end of the floor, resulting in a 58-39 lead for Chicago at the end of the first half.

The third quarter proved to be sloppy for both teams, as neither squad managed to score ten points prior to the six minute mark. Fortunately for the Bulls, this allowed them to maintain their lead of 20ish points for the majority of the quarter, as neither team found themselves able to string together a run against the other. Particularly bad for the Craptors was that they would go on to shoot an awful 2-12 from three point range through the first three quarters to go along with seventeen turnovers. Though DeRozan had a dunk and some freethrows to help inch the Craptors a bit closer towards the end of the period, the Bulls still entered the final twelve minutes with a 78-64 lead.

Tortrashto kept chipping away at the lead to begin the fourth quarter, cutting the deficit to ten points with nine minutes remaining in the game. Three minutes later, they would have the lead reduced to eight points. Fred Hoiberg had the genius idea of playing Doug McDermott and Denzel Valentine on the court together for much of the opening six minutes, and while the two did have a nice little five point explosion at one point, the lineup still allowed Tortrashto to inch within two possessions of tying the game.

With two minutes to go and both teams already in the bonus, the Bulls found themselves up by only five points. Over the next forty-five seconds, Butler took over on offense and drew two fouls on jumpshots to give the Bulls a quick four points, while the defense keenly double-teamed DeRozan on the other end to force Lowry into an ugly fadeaway corner three attempt. Michael Carter-Williams then forced a foul-hungry Lowry into an airball before Jimmy Butler drew yet another foul on offense and sank two additional freethrows to put the Bulls back up by double-digits. DeRozan got a quick bucket on the next possession, but Jimmy Butler countered with a great pass to Doug McDermott for a tough layup with thirty seconds remaining. Cory Joseph then got fouled on the other end, got called for a technical for saying something to the ref (after receiving a call in his favor), and then DeRozan got thrown out on his second technical for providing the refs with his own two cents on the matter. The Bulls comfortably put the game away from there, and ended the contest victorious on a final score of 105-94.

Jimmy Butler’s return from injury was one of the most brilliantly unorthadox offensive performances you will ever see. He shot a ghastly 2-10 from the field but still finished with 19 points thanks to a 15-19 performance from the freethrow line, and he also dished out 12 assists. Doug McDermott quietly scored 20 points off the bench on 8-13 shooting to go along with five rebounds, leading a reserve unit that sputtered in the second half but was still instrumental in building the early lead that allowed the Bulls to win the game. For the Craptors, DeMar DeRozan had one of his most disappointing efforts of the season, scoring only 18 points on 5-19 shooting from the field and getting tossed at the end of the game. Kyle Lowry totaled a career high 47 verbal disagreements with the officiating crew.

At this point, fans have to assume Tortrashto is cursed. The fact that this Bulls team has now defeated one of the best teams in the Eastern Conference (lol) over the last couple of years 11 times in a row simply can’t be described as anything other than wacky. The Bulls won’t be able to hang their hats on this one for long, however, as they will have a National TV game on TNT against the Boston Celtics on Thursday before the start of the All-Star break.