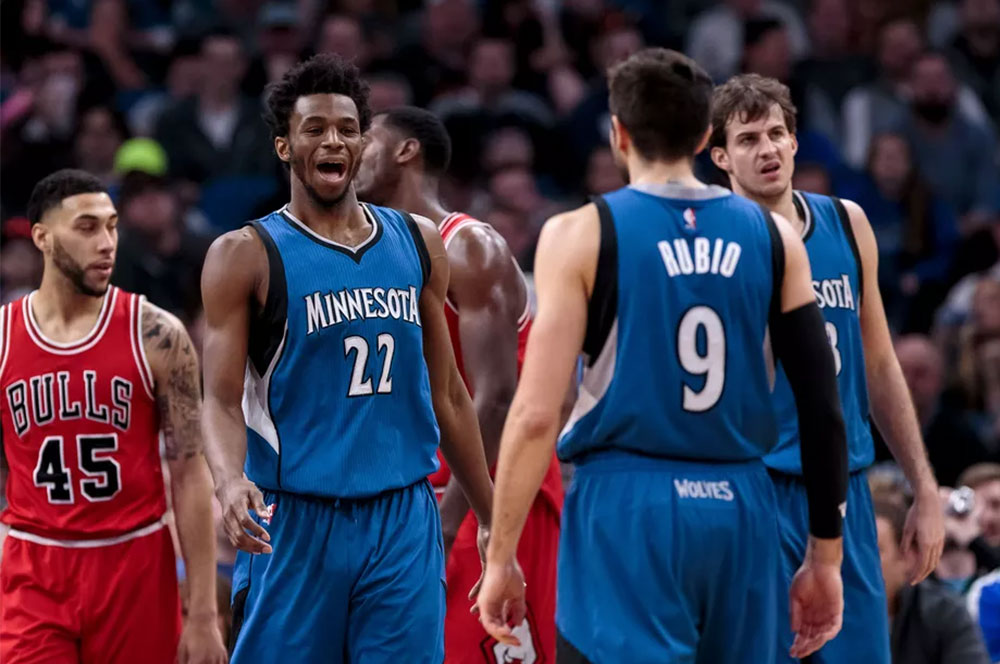 Tom Thibodeau completed the season sweep of his former team in dominating fashion.

The Timberwolves’ first sellout crowd of the 2016-17 season was not disappointed on Sunday.

The Wolves used a sizzling start and a brilliant first quarter by Ricky Rubio to grab a 34-17 lead after one quarter that eventually led to a 117-89 victory over the Chicago Bulls.

Rubio registered nine points (3-4 shooting), four assists, and two steals in the opening quarter, picking apart the depleted Bulls with surgical precision. He finished with 17 points on 5-10 from the field and 11 assists for his second consecutive double-double and 11th of the season.

The Spaniard’s best delivery of the game didn’t even result in an assist. But it included jaw-dropping accuracy and some level of insanity to attempt the pass in the first place.

Today’s win enabled head coach Tom Thibodeau to complete a season sweep of his former team. Although a few of his players have expressed extra emotions about wanting to beat Chicago for him, Thibodeau downplayed the revenge narrative when asked by the media after the game.

“No, you know it’s hard,” Thibodeau said. “For me I’ve been around so there’s a lot of those teams and it’s always hard when you’ve been through things with people and so I really root for that team and those guys—particularly the ones who I’ve coached before—and I want them to do well except when we play against them.”

Minnesota took care of business like it should have against a team missing as much fire power as Chicago was. In particular, perennial All-Stars Jimmy Butler and Dwyane Wade were kept out of action on Sunday for the Bulls, setting up for a replica of last Saturday’s matchup at Target Center when the Wolves fell to a Grizzlies team that was without starters Marc Gasol, Chandler Parsons, and Tony Allen. Andrew Wiggins told reporters after the game the Wolves brought the same mentality to today’s game as any other game.

“That’s the NBA. Guys are going to be hurt or not play some games,” Wiggins said. “You have to treat every game like every other game. Don’t switch nothing up, stay consistent.”

However, the Wolves maintained a double-digit lead nearly wire to wire, allowing Chicago to put together a few minor runs but none of the backbreaking runs Minnesota seems to surrender on a nightly basis. Karl-Anthony Towns said the Wolves maintained that lead because they brought a different level of focus.

“I think it’s important to stay focused,” Towns said. “You can lose focus real quick and forget that everyone in this league, they’re in this league for a reason. They’re the best players in the world.”

“Obviously they started hitting some threes. One way to get back in the game is definitely hitting those three balls. They hit some, but we stood strong and understood we had to make some plays, get some stops and get the lead back and momentum back on our side,” Towns said.

Minnesota’s scoring effort was led by Wiggins (27 points on 10-19 shooting) and Towns (22 points on 8-11 from the field). Both Wiggins and KAT dealt with their fair share of double teams and were not phased, each recording just one turnover compared to four assists and likely more unmarked hockey assists.

That’s 13 straight games of 20 or more points for Wiggins, who is averaging 25.7 points per game during that stretch and is just three 20-point games shy of tying Kevin Garnett’s all-time franchise record for consecutive such games.

Gorgui Dieng collected a double-double with 10 points and 13 rebounds for the afternoon. Nemanja Bjelica produced one of his best performances of the season off the bench by tallying 16 points on 6-12 from the field and 3-6 from downtown. Shabazz Muhammad once again notched a double-digit scoring effort by putting up 12 points on 5-7 shooting.

Chicago was led by Doug McDermott (16 points, 6/15 from the field, 4/7 from three) and Bobby Portis (16 points, 6/11) in the scoring department. The Bulls were the more efficient team from beyond the arc, converting 10 of 25 attempts compared to Minnesota’s six of 24, but that proved to be almost literally the only aspect of this game in which the Bulls outplayed the Wolves.

The win is a much-needed momentum boost for the young Wolves after losing five of their past six games. The homestand concludes on Tuesday when the defending champion Cleveland Cavaliers come to town. LeBron James and Kyrie Irving is a slight step up from Doug McDermott and Bobby Portis, so it’s safe to assume the Target Center crowd will be in for a more competitive game.