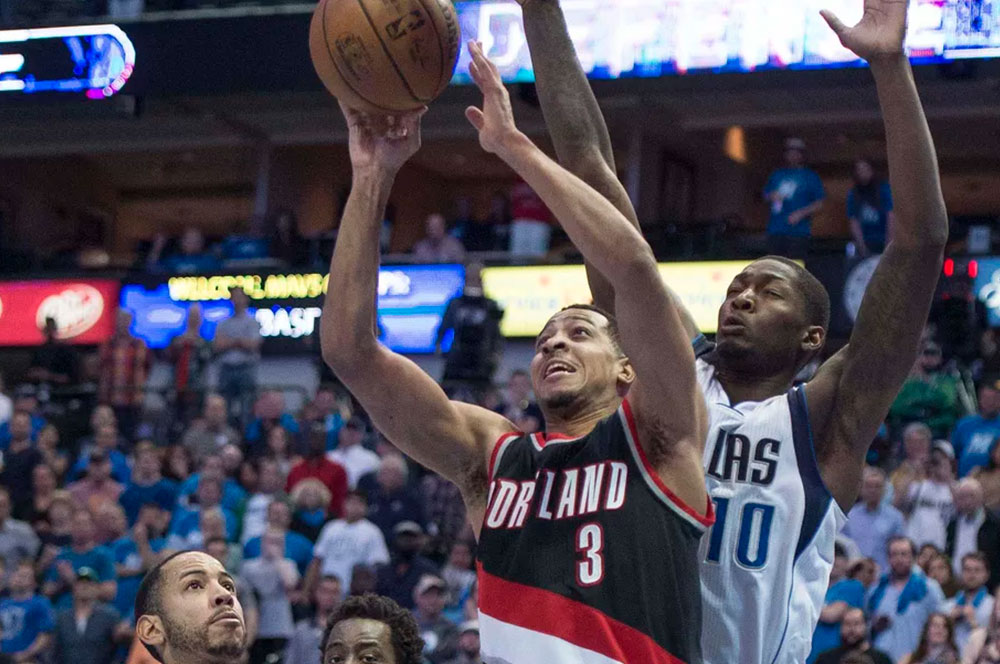 The Portland Trail Blazers tried to find a way to lose to the Dallas Mavericks, but their shooting guard said, “Nay Nay!”

Of late the performances of the Portland Trail Blazers could be termed “sporadic”. That’s if you like three-syllable words and were being charitable. Otherwise the sub-.500 team would be described as “limp and mediocre, headed towards bad” or, more simply, “disappointing”.

It’s not that the Blazers lack light or inspiration. Every game features one or two elements that make you say, “This team could be really good, if only...” This season the distance between “if only” and actual winning has been vast, with Portland inventing new and more frustrating ways to lose games each progressive week.

That story almost played out again tonight as the Blazers faced the Dallas Mavericks in American Airline Arena. Holding a 16-point lead, Portland frittered it away like Krispy Kreme. When Dirk Nowitzki hit a couple of monstrous threes in the waning moments of the fourth period, it looked like Portland was destined for another crushing defeat. That’s when newly-minted star shooting guard CJ McCollum stepped up with a shiny, new motto: No excuses, just more deuces. McCollum out-dueled Nowitzki, hitting THREE clutch buckets and a free throw besides. His scoring torrent was enough to lift his shaken team above the water line, giving them a much-needed 114-113 victory.

The Blazers opened the game with their best two-way half in recent memory, holding the Mavericks to 35% shooting in the first period and conceding “only” 53 points by halftime. Portland rebounded well, switched with alacrity, pushed the Mavericks away from easy shots, kept Yogi Ferrell unhappy, and shut the gate on Harrison Barnes.

As is their wont, Dallas lived at the three-point arc and the Blazers ceded them plenty of free throws. Those two avenues kept the Mavs out of a massacre. Otherwise Portland dominated. Dallas had no answer for Damian Lillard. McCollum rang them up repeatedly. Evan Turner cruised halfway to a 20-point game. The Blazers led 64-53 at the half.

The third period brought woe and misfortune as Turner exited the game with a broken hand. Portland’s remaining guards went cold. Offensive rebounding provided a lifeline but rebounding miscues couldn’t keep Dallas from posting a 29-22 quarter. Portland’s lead at the end of three was only 86-82.

The fourth period turned into a comedy of errors for both teams; basketball so ridiculous it was almost beautiful. The Blazers accelerated into a 13-0 run as Dallas treated the basketball like it was square. Then Portland gave all those points right back, stumbling their way through the Mavericks’ answering 13-0 run. If turnovers were gold, these teams would have been King Midas.

Despite the near-parity between the teams, it appeared Dallas would emerge with the edge in the contest. They manipulated Portland’s switch-heavy defense into constant mismatches in the post. On the other end they invited non-Lillard-McCollum scorers to take any shots they wanted, even close up. The percentages were slight, but they worked...or at least worked enough to sneak Dallas into a 108-107 lead when Nowitzki hit a trailing three-pointer on the break with 38 seconds remaining. Dirk’s appearance appeared to be the checkmate move, a resurrected star icing the victory cake built by his teammates.

“Not so fast,” said McCollum, dusting baking powder off his hands. With 34 seconds remaining he hit a sweet pull-up shot in the lane to earn back the 1-point lead, 109-108.

With the clock reading 0:19 Devin Harris took advantage of Portland’s weak exterior defense, pulling Mason Plumlee out of the lane to try and block a three-point attempt that wasn’t coming. Harris faked the three, dove under the Flying Plumlee of Doom, and dribbled right through a helpless McCollum for a layup. Dallas led again, 110-109. “Cake’s still good!” said the Mavs.

“Not so fast,” replied McCollum, returning the burn with interest. He drove past Harris and earned an and-one off of a weak-sauce foul that might have had Dallas Head Coach Rick Carlisle yelling, “What are you doing, Devin?” in the manner of Saturday Night Live’s “The Californians”. McCollum’s conventional three-pointer put the Blazers up 112-110 with 12 seconds left.

Dallas had no timeouts remaining but they didn’t need any as once again a size mismatch proved bothersome for the Blazers. Allen Crabbe found himself stacked up against a rising Nowitzki at the three-point arc. Dirk elevated over him like the Statue of Liberty rising above a bothersome hobbit. Swish went the three. Dallas led 113-112 with 3 seconds left. The cake was done, the timer dinged, the oven mitts were reaching through the door.

“Not...so...fast,” muttered McCollum once more. For the third consecutive play he came through heroically, splitting a tortuously bungled double-team off of an inbounds pass, gliding into the lane, and looping through a floater unopposed with but three-tenths of a second remaining. As the buzzer sounded CJ took that cake and he ate it too, right in front of 20,000 disappointed Mavericks fans, a head-shaking Nowitzki, and a wryly grinning Carlisle. Portland captured a 114-113 victory that should have been way easier, but somehow was more satisfying this way after all.

McCollum was a Big, Big Deal tonight. That’s pretty much what you need to know. The game-long trends Portland evidenced were in keeping with their usual comportment: occasional brilliance surrounded by head-scratching buffoonery. Their 39% three-point shooting clip was sublime; the 43% they allowed Dallas negated it. Each team fired 49% from the field but Portland started the game with a 55%-35% advantage after one and slipped from there. Outside of offensive rebounds—an 18-2 advantage which was a huge credit to the Blazers’ frontcourt—nothing the team did stuck for long. Every time they earned something good they fumbled it away soon after.

Lillard and McCollum were the only real constants throughout. They scored on a mighty pace. But when crunch time arrived and the game was on the line, McCollum got the nod while Dame played decoy. It worked because Lillard didn’t insist upon his prerogatives and, of course, because McCollum was a Big, Big Deal.

Portland fans will rejoice that Young Yogi, the 10-day contract player who shish-kabobbed the Blazers at home two games ago, scored only 12 points on 4-9 shooting. The rangers were watching the pic-a-nic basket tonight. (Harrison Barnes scored 26, Wesley Matthews 23, and Nowitzki 25 but you can’t have everything.)

Moe Harkless hit only 2-9 shots but he led the offensive rebounding brigade with 5. Mason Plumlee had 4, Ed Davis 3, and a couple of the Blazers notched 2 each. Dallas had 2 as a team.

Allen Crabbe had the only party-pooper performance, shooting 1-6 from the field, 0-4 from the arc, scoring 4 points with 5 personal fouls and a turnover in 22 minutes.