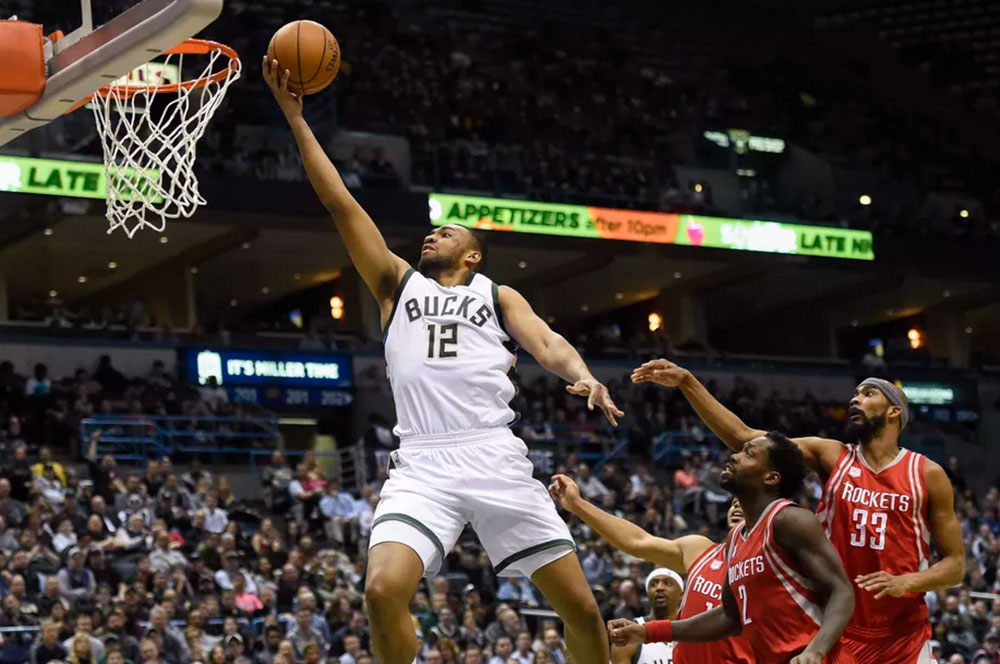 A perplexing Bucks season only added to its confusing legacy tonight, snapping a five-game losing streak with an offensive explosion in a 127-114 against Houston. Milwaukee shook up its starting lineup, inserting Miles Plumlee for John Henson, giving Plumlee his first start since November 25th against the Raptors.

The change paid dividends, with Plumlee slamming home a number of lobs and finishes in close, but this game really came down to Giannis and Jabari matching Houston at every turn while the role players played competently for the first time in a while. Houston kept up with Milwaukee’s nuclear 68% shooting in the first half, and pulled it even in the fourth before bumbling the ball repeatedly, as Jason Terry hit several big shots and led a string of four Milwaukee steals that turned into points on the other end that gave Milwaukee a comfortable cushion to help them hang on for the victory.

Houston couldn’t keep up with the Bucks’ 58.8% shooting on the night, including 47.8% (11-23) from deep, as the Rockets shot only 50.6% overall. Milwaukee held them below their three-point attempt average for the season though, only allowing 14-35 shooting after 44 attempts from Houston last week.

Milwaukee finished with a quite poor 19 turnovers on the night, but Houston was particularly egregious with the ball, firing weak passes directly into the hands of Bucks’ defenders for 22 turnovers. That was most acute in the fourth quarter, when Milwaukee had eight steals, six of those coming in key, non-garbage time minutes. Those ill-fated passes led to 34 points for Milwaukee, nearly 11 more than Houston scored off the Bucks’ turnovers tonight.

Defense was optional to start, with both teams splashing from behind the arc and getting to the rim whenever they like. Miles Plumlee provided a jolt, slamming home a one-handed jam off a Jabari pass, but the Rockets pick and roll devastated the Bucks defense with easy passes and open looks from outside. Milwaukee’s offense maintained a pace it hasn’t of late, with Jabari and Giannis pushing in transition to make it 20-18 after a couple of Giannis free throws midway through the first. Milwaukee kept pushing the ball for quick shots, with Jabari finding Monroe for a transition layup and then Snell hitting a three before the Rockets’ D could get set, making it 29-21.

Houston rocketed back into the game as the quarter closed, going on a 12-4 run that ended with another easy Nene bucket rolling to the rim and Harden finish that psyched Bari out of his sneakers. The quarter ended tied at 33, with Jabari the high man at 11 points.

Giannis opened the second with six straight points, followed by a cutting Mirza Teletovic who slipped behind Sam Dekker for an easy layup (somewhere, you can almost hear Bo Ryan reflexively yelling on his sofa to bench Dekker). Milwaukee’s lead expanded to 50-35 after a Jason Terry three, before Harden returned and helped orchestrate Houston back within 54-45. Jabari Parker returned from his respite to continue his dominating play, shimmying his way to the rim or finding Plumlee at the hoop before hitting two free throws to make it 62-50. Houston (read: Harden) propelled Houston back, hitting two nonchalant deep pull-up threes as Houston trailed only 68-64 at the half.

Jabari posted 20 points, six rebounds, five assists, two steals and a block in his best stretch of basketball for some time, with Giannis rattling in an efficient 17 points on 6-9 shooting. Greg Monroe added eight points as Milwaukee shot a blistering 68.3% on the half.

James Harden led Houston with a typical 19 points and seven assists, while the freshly returned Ryan Anderson had 13 points despite only going 3-5 from three. Houston shot 52.4% on the half, including 8-19 (42.1%) from deep. Milwaukee found its advantage in fast break points, doubling up Houston with 16, and managing 17 points off of 11 Houston turnovers. Of course, Milwaukee had 13 sloppy turnovers of their own, providing Houston with 15 points.

Milwaukee hit several difficult shots to start the second half, Jabari with a pull-up midranger and Giannis with a fading leaner in the lane, but Houston pulled within one at 77-76 after Patrick Beverly hit his third shot of the half in just over three minutes. Houston regained the lead for the first time since it was 18-15, but Giannis responded with a pull-up three to get it to 80-78. Both teams continued their shot-making duel, with James Harden orchestrating shots out of the pick and roll and Milwaukee finding success in the paint off finishes from Parker, Delly and Monroe, who slipped a pick to fool Nene and get an easy layup. The quarter concluded with Milwaukee up 93-91.

Milwaukee stuck with Houston off a few tough jumpers, as the Rockets’ Clint Capela hit some practice session layups to make it 99 all. After Greg Monroe won a rebounding tussle with Clint Capela, Jason Terry nailed a transition three that Milwaukee followed up with three steals against Houston, each of them culminating in points punctuated by a Tony Snell three blasting Milwaukee ahead, 110-99. Houston tried pulling their way back, with Ryan Anderson hitting a deep three and James Harden repeatedly throwing his arms up to draw foul calls.

Milwaukee kept snatching the ball from Houston though, getting transition buckets with a Greg Monroe roll around the rim layup making it 118-110 with two and a half left. Giannis gave the Rockets a parting memory with a deep three-pointer over Nene’s salt and pepper locks as the ball swished through and Milwaukee won 127-114, snapping their five-game losing streak.