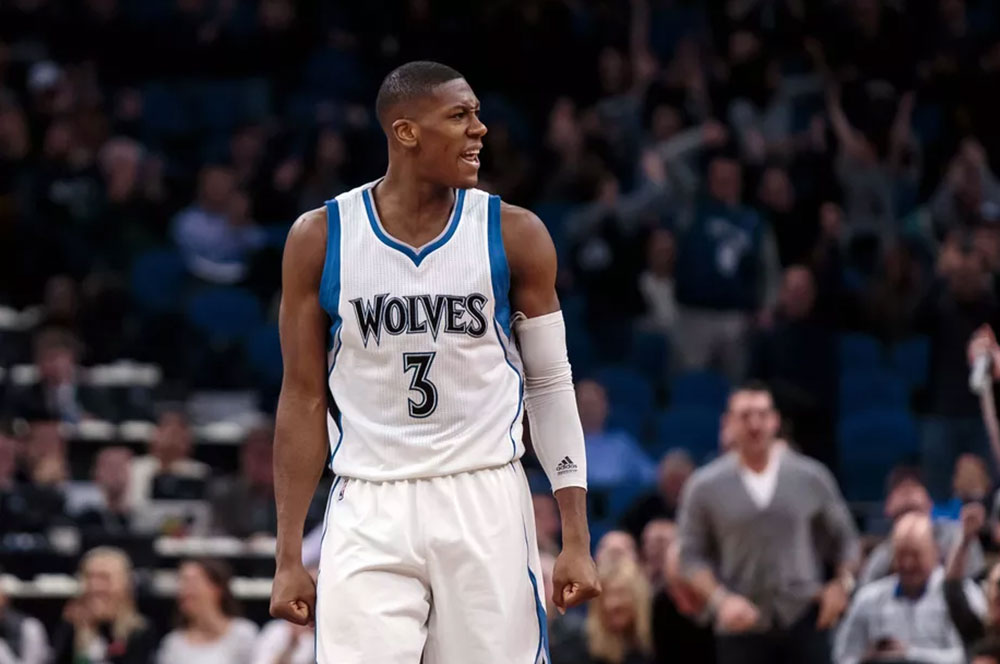 KAT continued his recent onslaught with another virtuoso performance. He had 32 points, 12 rebounds, seven assists and four blocks as the Wolves beat Denver in a close game down the stretch.

Both are second year players and franchise cornerstones for their respective teams, but don’t ask KAT about matchups.

“I mean it’s just another game. I don’t look at matchups or anything like that,” Towns said after the game. “For me, I want to take the opportunity that was given to me and do what I can to make a play for my teammates.”

He may say that, but his aggressive play throughout when going against Jokic tells me he had a little something extra for the Serbian.

KAT opened his night of scoring with that vicious dunk where it seemed as if the rim owed him much more than his lunch money. That was over Jokic, and from that point on the two played an increasingly physical game. He hit turnaround jumpers, threw in a few more highlight dunks, and swatted shots as he helped will this team to their 16th win, 111-108.

You can’t ask for much more than that from Towns, and that’s where the other Wolves players come into the equation. With Ricky Rubio out for personal reasons, Kris Dunn got his sixth career start. If you simply looked at the stats for your starting point guard, you may think Ricky was never gone. Dunn finished with 10 points (eight of those in the first couple minutes of the game) nine assists, eight rebounds, three steals and a block.

His help defense repeatedly stifled the Nuggets offense, something that neither team could do consistently early on. It’s funny to think of Dunn as one of the Wolves best weak-side rim protectors, but that’s exactly what he is. He was asked about the team’s recent success and you can probably guess what he said.

Gary Harris scored 22 points while Nikola Jokic filled up the stat sheet with 18 points, eight rebounds, four assists, three steals a block for the Nuggets, who were on the second night of a back-to-back. Wilson Chandler and Jamal Murray both dropped 17 points for Denver.

Those two showed great chemistry this game and Bazz finished with 20 points on 9-14 shooting to go with five rebounds.

“I think we’re really starting to learn,” Muhammad said. “Especially in the last minute, we just made some really nice defensive stops. We were really doing it at that end even though all game we couldn’t really lock down, we got the stops we needed and it really helped us out a lot.”

He was making the extra pass and remained focused on defense throughout, which is probably why Thibs rewarded him by playing him the entire fourth quarter.

Tyus Jones can say the same, as coach Thibodeau trusted his young guards with closing this one out. Zach LaVine struggled mightily and he hasn’t been the same since missing some time with that hip injury. He took bad shots when the team was attempting a comeback where they were down nine halfway through the fourth. That meant Dunn and Jones finished the last 5:40 of the game for the team.

“What you guys don’t see is they play a lot together in practice, so they have a very good chemistry in practice, so you feel like it’ll work in a game too. I like that look, I like what it does for us—it gives us multiple guys who can go off the dribble and force a defense to collapse and then make a play,” Thibs said of Dunn and Jones after the game.

Tyus scored six of his nine points in the last frame as the Wolves crawled back. Dunn pulled down two defensive boards on the last two Nuggets’ possessions to help seal the victory. It wouldn’t be a Wolves game if they didn’t give us a little scare. While trying to wrap it up, Wiggins, Jones and Dunn all missed the front end of their free throw attempts late in the game. Each miss left Denver a chance on the ensuing possessions, but it didn’t matter as the team stepped it up defensively when they needed it most.

The next 13 games feature nine at home, and record-wise the schedule is favorable. The team is now only 2.5 games back from the eighth seed, which is currently held by the Nuggets, making this win that much more meaningful. The team travels to Phoenix on Tuesday where they will attempt to get their second three-game winning streak of the season.

Tonight is Minnesota’s fourth consecutive home win, their longest home winning streak since winning five straight between Nov. 30 and Dec. 20, 2012. They are 5-2 in their last seven games and 9-9 in their last 18.

After averaging just 8.0 points off turnovers over their last three games, the Timberwolves scored 31 points on 18 Nuggets’ turnovers tonight.

Minnesota’s bench scored 37 points, its most since scoring a season-high 47 points at New York on Dec. 2.

After missing three games with a right ankle sprain, Gary Harris scored 22 points on 9-of-13 shooting.

Jokic had 18 points, eight rebounds, four assists and three steals but only played 27 minutes after averaging over 31 minutes of play in his last five games.