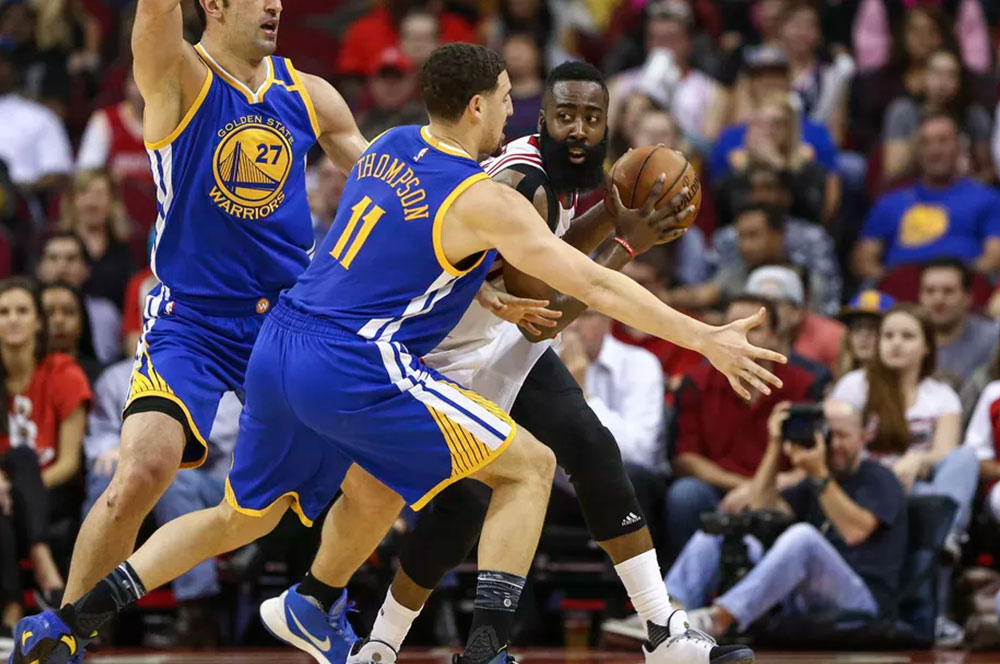 The Golden State Warriors used clean defensive execution and continued all-around excellence from the Big Four to avenge their December loss to James Harden and the Houston Rockets, 125 - 108. Kevin Durant and Stephen Curry spearheaded a controlled offensive attack, with 32 and 24 points respectively. James Harden, hampered by a hounding rotation of Klay Thompson and Andre Iguodala and without the usual contributions from his running mate Eric Gordon, was harassed into 17 points, 11 assists, 7 turnovers, and an 0-for-5 night from downtown.

The Warriors and the Rockets are both built to play fast, loose, and fun. In taking on a similar offensive attack, coach Steve Kerr opted to nix Mike D’Antoni’s hyperactive perimeter game by having both defenders up hard on the ballhandler (most often Harden) in perimeter PnR situations.

With the first option (three point shot) denied, the onus for preventing the roll man from scoring falls on the first rotation, usually Durant or Draymond Green. Not only did the Warriors execute this initial rotation well; more often than not the Warriors covered the second rotation out on the perimeter to deny the third Rockets option.

This all resulted in an 0-for-10 Rockets performance from behind the arc in the pivotal third quarter and a 7-for-35 (20%) performance overall. With Thompson effectively smothering Harden’s individual drive-and-create offense, the Warriors deprived the Rockets of their offensive flow entirely.

Meanwhile Curry, Durant, Green, and All Star snub Zaza Pachulia kept the Warriors’ offense in a controlled, patient manner all night despite shots rattling out from behind the arc and at the free throw line. Curry and Durant often found themselves working 1-on-1 at the top of the arc against a mobile yet undoubtedly disadvantaged Houston big after a PnR switch; from there, player movement and patience created consistently open attempts for the Warriors against the set Houston defense.

It was a technically dominant performance, won by virtue of the clean execution on both sides of the ball.

Banner Week for the Warriors

The Warriors faced three top nine teams by SRS this past week.

At this approximate point in the schedule last year, the Steph Curry and the Warriors began their interlinked peak. Curry was breathing fire and fifty point explosions, turning opposing arenas into jungle gyms.

This time around, the glue is beginning to dry. Pieces have been secured into their place in the rotation; Durant is starting to anticipate where Curry will flare out to on the fast break; Curry can loft the ball to Zaza out of the PnR without hesitation. By and large, shooting percentages are rising. Kerr is finding solid footing as reliable units emerge.

This was perhaps the most cohesive the defense has looked all season. If it were easy to stop the Rockets offensive acrobatics, more teams would do it. (The Rockets have the third-ranked offense by ORtg). Holding the Cavs fifth-ranked offense to 91 points earlier in the week was another bright spot for a defense that looked shell-shocked against the Phoenix Suns in October.

The Warriors may be the most dominant team in professional American sports at the moment, and they’re improving every game.