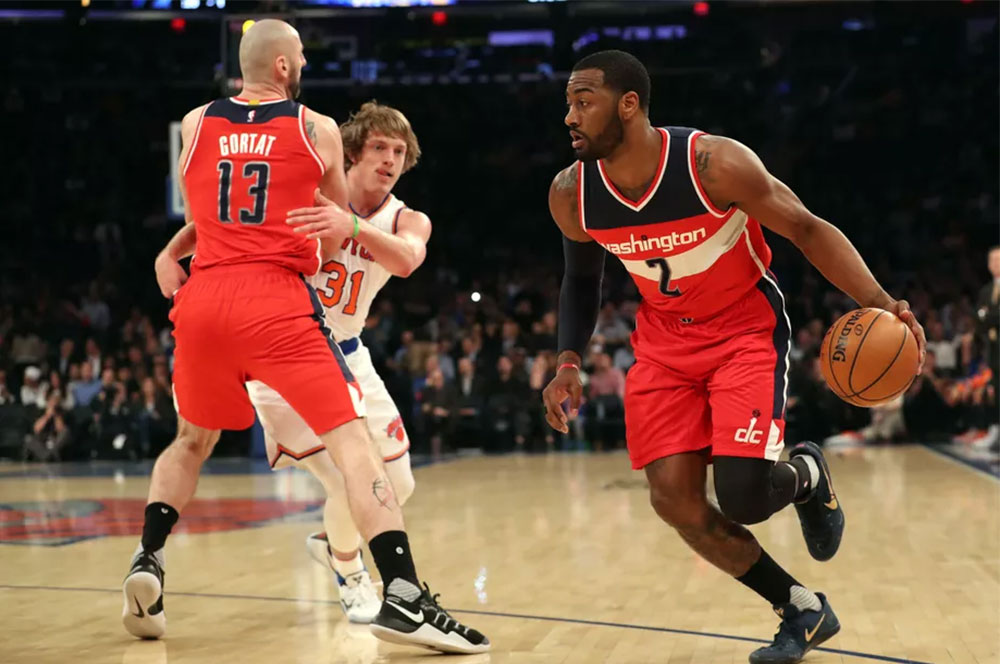 In a wild finish, the Wizards tackled their road demons with a 113-100 over the Knicks in Madison Square Garden on Thursday night.

John Wall puts on a show in the Garden

John Wall has a reputation for putting on a show in Madison Square Garden, and he did not disappoint. Wall outran everyone in transition and worked the pick and roll to perfection, ending the night with 29 points, 13 assists, and 3 steals, as well as scoring the final four points for the Wizards, including two on this amazing play.

Beal had another forgettable game, with an 8-point performance. He also missed all seven of his three-pointers after only going 1-7 against Memphis on Wednesday.

It’s only been two games and every player has slumps, so Wizards fans shouldn’t be worried yet. The defensive attention paid to Beal opens up space for others, but I’m sure everyone will breathe a sign of relief when he finds his rhythm again.

But tonight you would be wrong.

After scoring only two points in the first quarter, Anthony exploded for 25 points in the second quarter. It didn’t matter who was guarding him or what the shot was, hit nearly everything. He slowed down in the second half, but still hit a few big buckets in the fourth quarter as the Knicks made their comeback. Anthony finished the game with 34 points and 10 rebounds.

Otto Porter: The man, the myth, the legend.

Porter went into tonight’s game as the second most accurate three point shooter in the league. But the Knicks didn’t guard him with the respect typically given to elite shooters, much like the Grizzlies on Wednesday. Porter made them pay, scoring 23 points and going 6-10 from deep.

Gone are the days when Porter looked timid and frail against NBA competition. There’s a case to be made that he is the second best player on the Wizards’ roster right now.

The Wizards nearly run out of steam in the fourth quarter

Despite a commanding third quarter where they took a fourteen point lead, the Knicks came back to take the lead in the final seconds of the game after a Derrick Rose putback. Heroics from John Wall ultimately saved the day for Washington, but for the second straight game, this one was a lot more stressful than we would have liked.