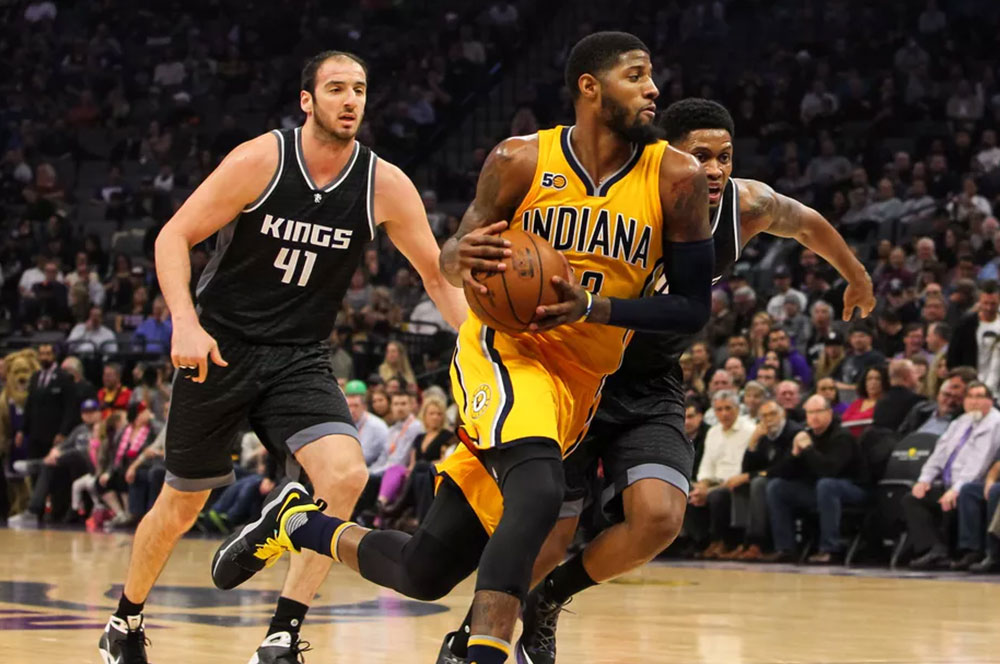 Paul George scored 24 and Jeff Teague had 22 to lead Indiana to a late win over Sacramento.

Execution nearly proved fatal for the Indiana Pacers, who struggled to get out of their own way in the first two and a half quarters against the Sacramento Kings. Indiana trailed by 18 at halftime with the Kings shooting 64% and limiting Indiana to just 11 first half rebounds, but even Sacramento going ice cold in the third wasn’t enough to help the Pacers trim more than a point off of that lead in the first eight minutes of the third.

But out of a Pacers time out, Indiana woke up, finally bringing energy and hitting back to back threes to kick start an 18-9 run to close the third. The Pacers would continue to chip away at the Sacramento lead, finally breaking through with 1:55 remaining in the game to set up an impressive road victory.

It was a tale of two halves for both teams, with Indiana shooting 65% in the second half, outscoring the Kings 65-40. DeMarcus Cousins dominated in the first half, but was 0-7 with five points in the second half. Indiana outrebounded Sacramento 22-14 after the break, and the Pacers were finally able to capitalize off of 21 Kings turnovers, outscoring Sacramento 23-14 in points off turnovers.

The Kings did suffer a massive loss in the third quarter when Rudy Gay was carried off the floor with a torn achilles. Gay had 21 points in 28 minutes and was feasting on a lackadaisical Paul George every opportunity he got. Without him, the Kings were short on offensive answers with Cousins struggling.

It seemed everything that could go wrong for the Pacers did in the first half with Al Jefferson being the only bright spot. Jefferson had 20 points on 9-12 shooting, finding himself in a zone offensively when Indiana couldn’t score to keep them in the game. C.J. Miles had nine and both Aaron Brooks and Monta Ellis came up with big hustle plays off of their own misses, but it was Jefferson that salvaged an otherwise woeful bench night.

But while Jefferson kept the door open for Indiana, it was the starters that lifted the Pacers to the win. Myles Turner and Thaddeus Young made the dirty work plays, with Turner going to work defensively on Cousins while Young brought a necessary energy, including a game saving block on Cousins.

While Young and Turner lifted the energy of the Pacers, Jeff Teague created the results on the scoreboard. Teague finished with 22 points and 11 assists, scoring 18 in the second half and finishing 11-11 from the free throw line. He also had six assists and seven rebounds.

For the Pacers, this was the kind of win they’ve been searching for; a gutsy showcase on the road that they can look at and hopefully build upon with a pair of road games remaining on their Western road swing as they travel south to Los Angeles to face the Lakers on Friday.

But while their 21-point comeback is the biggest on the road this season and reminiscent of their 15-point comeback against the Clippers, their struggles to build upon that win still make tonight’s game a “wait-and-see” approach, but at 7-1 in their last eight, there’s a chance to create lasting optimism beginning on Friday.