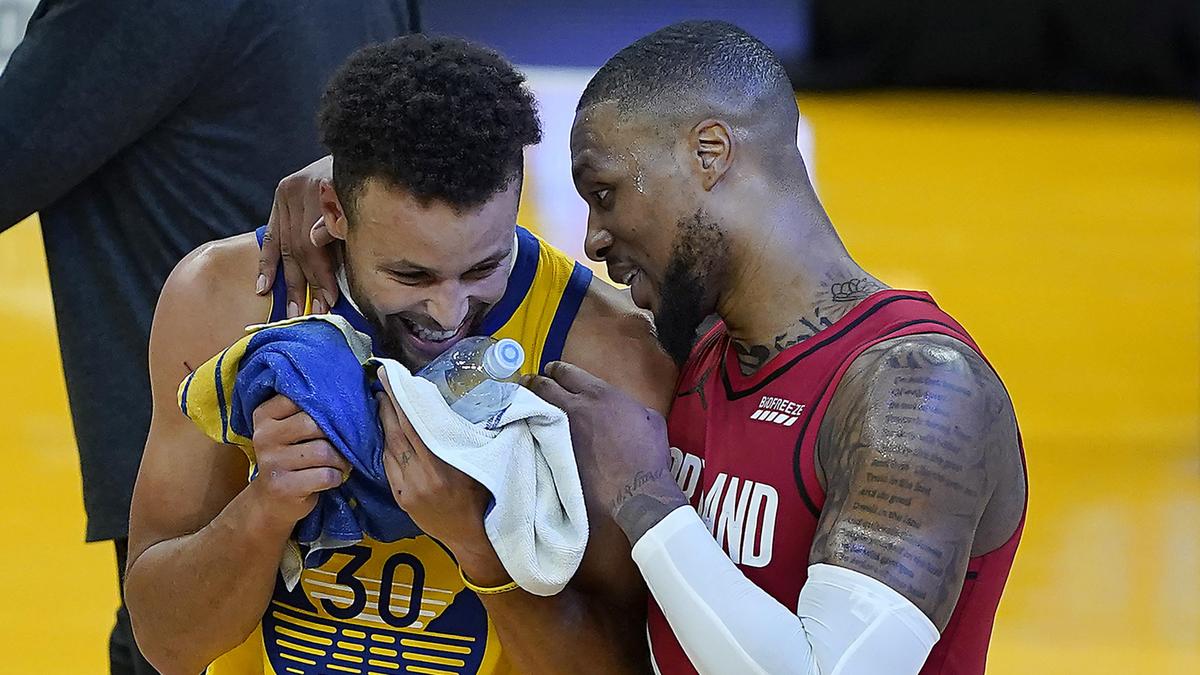 Stephen Curry twirled an arm in the air to acknowledge a small cheering section of family members in a near-empty arena, then gleefully disappeared down a tunnel to celebrate his best scoring night yet.

Curry let it fly from way out under pressure with a minute-plus left for another perfect swish on the way to a career-high 62 points, and the Golden State Warriors beat Portland 137-122 on Sunday night to split the two-game set with the Trail Blazers.

“I love it. I love everything about what this game offers, the competitiveness and the fire,” Curry said. “I never run from it. Just excited to be in that atmosphere where I get to play at the highest level and do what I do.”

Curry delivered the highest-scoring game in the NBA this season early in his 12th campaign, finishing 18 for 31 and 8 of 16 on 3-pointers after beginning with a 21-point first quarter. He had his 10th career 30-point half to help the Warriors take a 66-54 at the break, then doubled his total exactly with his teammates telling him his count at every chance.

“He was making every shot within like 10 seconds and we couldn’t even keep up,” rookie James Wiseman said.

One small blemish in his brilliant night: Curry had his streak of free throws snapped at a franchise-record 80 in the first. The run dated to March 29, 2019, vs. Memphis.

“And then he just choked. It’s just incredible,” cracked coach Steve Kerr, who jokingly offered the game ball to Wiseman before handing it over to the most deserving recipient.

Against Portland, Curry made a career-high 18 of his most attempts yet at 19. No fear, the 6-foot-3 Curry even took it right at imposing 7-footer Jusuf Nurkic.

“He did a little bit of everything,” Trail Blazers coach Terry Stotts said.

Curry boogied. He smacked the floor and screamed in delight. The 32-year-old two-time MVP closed his eyes and showed off a open-mouthed grin as brother-in-law and teammate Damion Lee poured water over his head — this kind of night was a long time coming after a broken left hand limited Curry to five games in the coronavirus-shortened 2019-20 season.

“When you have something to be excited about you kind of feed off your own energy,” said Curry, who says the “great ones” learn how to block out the critics and embrace the expectations.

“He came out looking like a man on a mission,” Draymond Green said.

Damian Lillard scored 32 points for Portland, and CJ McCollum added 28. McCollum shot 2 for 8 from deep after his 25 3-pointers over the initial five games left him and Curry as the only players to ever do so.

After Portland’s 25-point win Friday night, the Warriors were embarrassed and determined to be more aggressive and defend better after the Blazers came out firing to finish 20 of 43 from deep — and they looked more energetic on the defensive end. Portland shot 14 of 43 on 3s Sunday.

Curry did it all on the other end. When he sat down for good in the waning seconds and received hugs from teammates, the piped in crowd noise seemed extra loud in an arena devoid of real fans.

“It’s just a privilege to coach him, it really is,” Kerr said.

Green had eight assists and scored one point playing his second game of the season with his minutes increased from just below 18 to 28. He was sidelined the first four games by a right foot injury after being delayed starting training camp because he had the coronavirus.

Wilt Chamberlain had 27 60-point performances for the Warriors franchise, the only one in team history with more than one.

Lillard, who became just the second Portland player joining Hall of Famer Clyde Drexler to reach 15,000 points Friday night, is at his best against the Warriors.

Lillard has scored at least 29 points in seven straight games against the Warriors and has made at least five 3-pointers in six of those games.Trail Blazers: F Rodney Hood didn’t play after he strained his left quadriceps Friday night and played just five minutes. ... McCollum had five assists, nine rebounds and two steals.