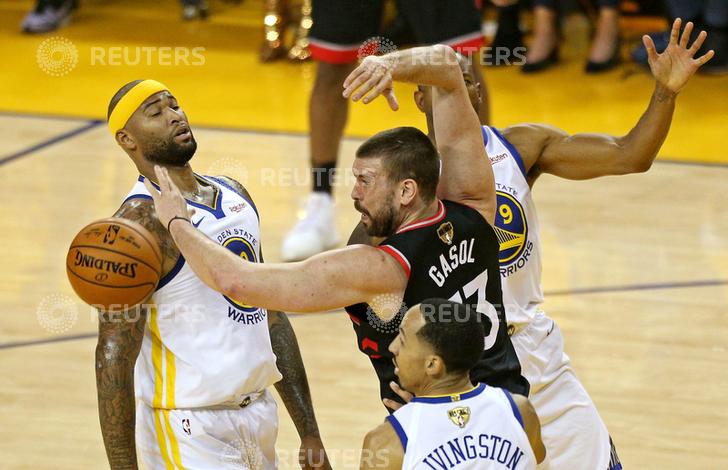 The shorthanded Golden State Warriors were pushed around by a focused Toronto Raptors squad in Oakland, losing 123-109 to the Eastern Conference champions. Toronto has taken a 2-1 lead and bounced back from losing home court advantage.

Steph Curry was the only Warrior who could consistently get his own shot; he scored a career Finals’ high 47 points, with 8 rebounds, and 7 assists.

Kawhi Leonard bullied his way to 30 points, while Kyle Lowry (Toronto’s other KL) backed him up with 23 points of his own.

Not gonna lie, as much as I enjoyed Oracle’s faithful rooting on Alfonzo McKinnie and Quinn Cook...woulda been nice to have the injured Kevin Durant, Klay Thompson, and and Kevon Looney available. But who cares? It’s the Finals: you either win or you take your beating.

That is the way of the champion.

First Half
Oh my goodness, the Warriors missed their wings early on. The Raptors knifed past defenders at will and got any shot they wanted. On the flipside, Curry was relentless, trying to keep the Warriors in the game at all costs.

With the Warriors defense leaking, their offense couldn’t seize momentum despite Curry’s heroics.

Second Half
The third quarter was the equivalent of Toronto trying to carefully open a viciously shaken bottle of grape soda while wearing a white tuxedo. The Warriors kept trying to explode, and the Raptors defense kept holding it under wraps.

Toronto continued to work their advantage throughout the fourth quarter, with a full spread of buckets across their squad. Every weakness the Warriors had in personnel, the Raptors pinpointed and took advantage of in brutal efficiency. When the Dubs played great D, Toronto nailed great shots.

Toronto couldn’t stop Curry, but they didn’t have to. The Dubs defense didn’t get enough stops to let Unanimous’ magical night in Oakland steal the game.

Also, something is up with DeMarcus Cousins lower leg. We’ll wait for the news to bubble up, but he limped to the back in the fourth quarter of a bad night.

Raptors really taking us to some weird bizarro twist on the 2015 Cleveland Finals: we’re down 2-1 in the Finals, except WE have all the injured players. How macabre.