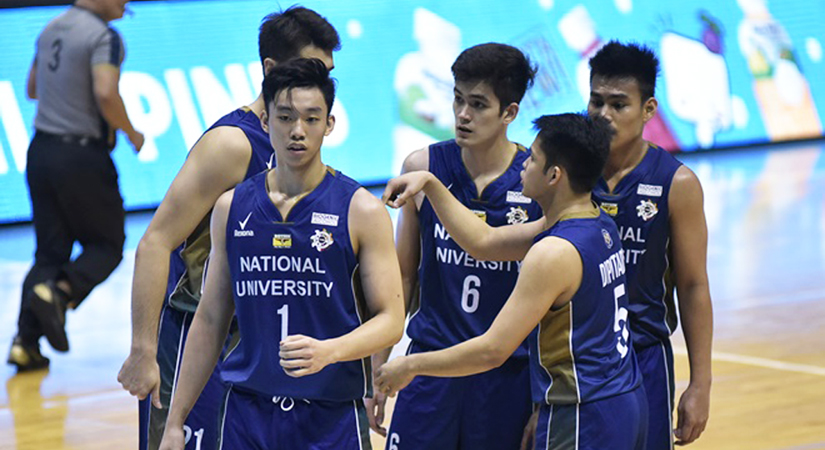 AN EVENTFUL first round of the eliminations of Season 81 of the University Athletic Association of the Philippines comes to an end on Saturday, Oct. 13, with a double-header set at the Mall of Asia Arena.

Currently bottom-scraping with an identical 1-5 record, the Bulldogs and Red Warriors try to avert being the sole tailender as the first half of the season ends in their collision today.

NU has lost five straight since opening its Season 81 campaign with a victory.

The Bulldogs had a chance to wiggle out of their slump in their last game against the University of the Philippines but could not complete their comeback after failing to execute their play in the end to bow, 89-88.

The Warriors, for their part, are coming off a shellacking at the hands of the University of Santo Tomas, 80-66.

The loss sent UE back to the ground after breaking through with its first victory of the season over Far Eastern University, 90-65, previously.

In the second game, Adamson (5-1) tries to bounce back after absorbing its first loss of the tournament at the hands of FEU, 88-85, in overtime in its last assignment.

The defeat effectively ended the Falcons’ chances of finishing at least the first round with an unblemished record.

On the other end, La Salle (3-4) looks to finish the first half with a winning record.

The Green Archers lost to rivals Ateneo Blue Eagles in their previous game, 71-55.

AT THE NCAA
Meanwhile at the National Collegiate Athletic Association, top-half teams Letran Knights and Perpetual Help Altas battle today at 12 noon at the FilOil Flying V Centre, with the end of view of fortifying their place in the Final Four and build as much momentum as possible heading into the playoffs.

The Knights (12-4), winners of their last five games, have assured themselves of a spot in the Final Four with a 79-61 victory over the San Sebastian Stags on Oct. 9.

As of this writing they still have a shot at the top two — currently occupied by the San Beda Red Lions and Lyceum Pirates — but expressed readiness for wherever they wind up in the playoffs.

The Altas (11-5), for their part, seal a playoff spot with a victory today over the Knights, shutting the door on the College of St. Benilde Blazers (8-7). The latter though has a game set for later on Thursday against Lyceum which could determine their playoff fate.