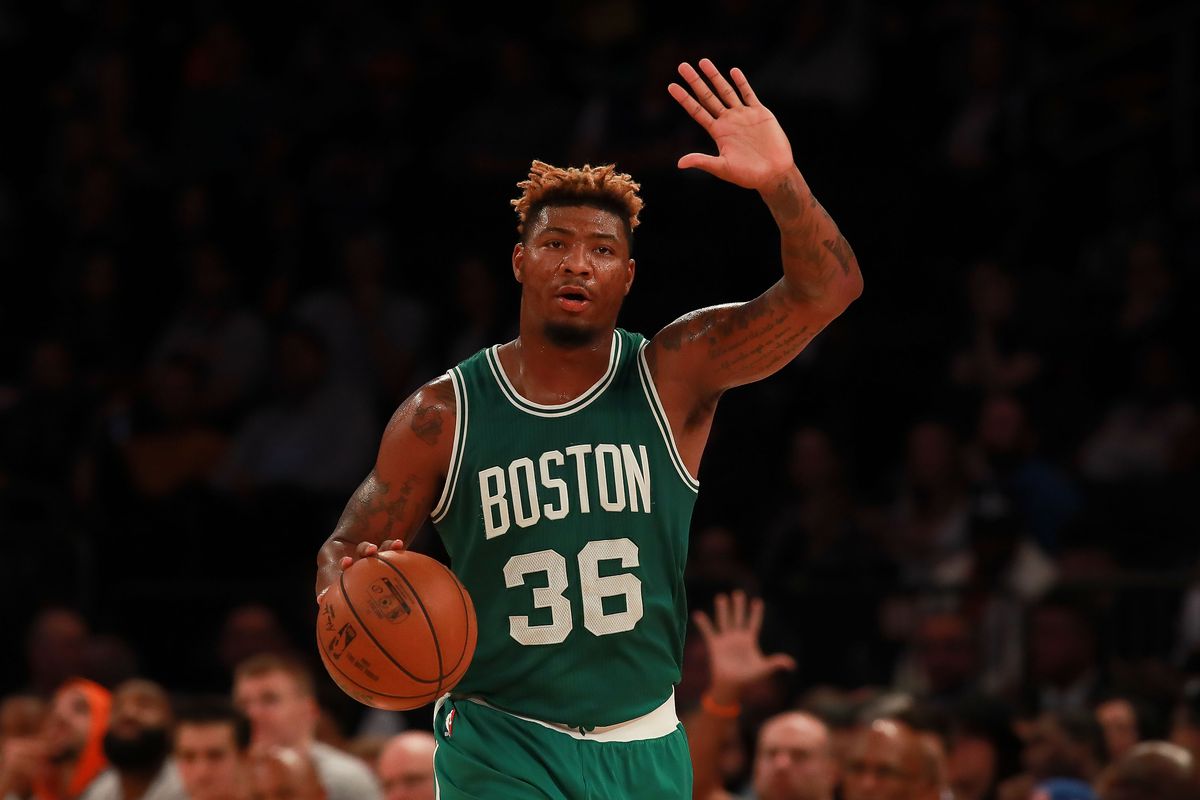 The Boston Celtics are open to trading Marcus Smart before the NBA trade deadline on Feb. 8, and the Denver Nuggets are one team who have reached out, according to The New York Times’ Marc Stein. However, it appears that the Celtics would like a first-round pick, something the Nuggets may not be willing to part with.
According to Stein, the Nuggets have made available their own backup point guard, Emmanuel Mudiay, who is two years younger (21) than Smart. Mudiay is averaging a career-low 17.9 minutes for the Nuggets this season, and the still young backcourt figure could benefit from a change in scenery.
Boston, meanwhile, has expressed interest in Tyreke Evans, as the Memphis Grizzlies guard is having his best season since being named Rookie of the Year in 2010. The Grizzlies have made it clear they would like to deal the versatile ball handler before the deadline passes, and a Smart trade could help facilitate that.
Smart is a polarizing player because of his offensive struggles — he is only shooting 36 percent from the field and 30 percent from deep this season, right in line with his career figures. Smart is averaging 4.7 assists this season, and his essential confidence appears to help him, but the Celtics aren’t looking forward to Smart’s upcoming free agency this summer. If they don’t plan on re-signing him, then it would make sense to deal him now.
Boston likely wants a first rounder so they can deal it to Memphis for Evans, a guard who can create offense much more reliably than Smart, even if he’s older and on an expiring deal. If the Celtics could grab a first-round pick, they could use it to deal for Evans, rather than giving up one of their more valuable selections, like protected 2019 first rounders from Memphis or Los Angeles.
(The Grizzlies probably aren’t interested in Boston’s own first rounder, which will be very late in the first round. They’d love to get back their 2019 first rounder, but Boston shouldn’t be eager to do that for a bench guard who is likely a one-year rental.)
Denver likely called Boston to offer a Mudiay-for-Smart swap, although as mentioned above, the Celtics probably declined it (at least for now) to wait for a first-round offer instead. Though Mudiay is young, the Nuggets are clearly acknowledging that he likely won’t work out in Denver. They have plenty of young guards ahead of him — Jamal Murray, Gary Harris, and Will Barton. They no longer need Mudiay.
Smart would give Denver a defensive guard behind their three scorers, and they would have a couple months to determine whether they would be interested in re-signing him. Denver’s defense is bottom-10 in the league, and Smart’s addition would help that.
I’d guess that Denver isn’t eager to give up their first-round pick unless they’re certain they would re-sign Smart this summer. (He would be a restricted free agent with Bird rights, though.) If they relent, then perhaps this deal could be done.