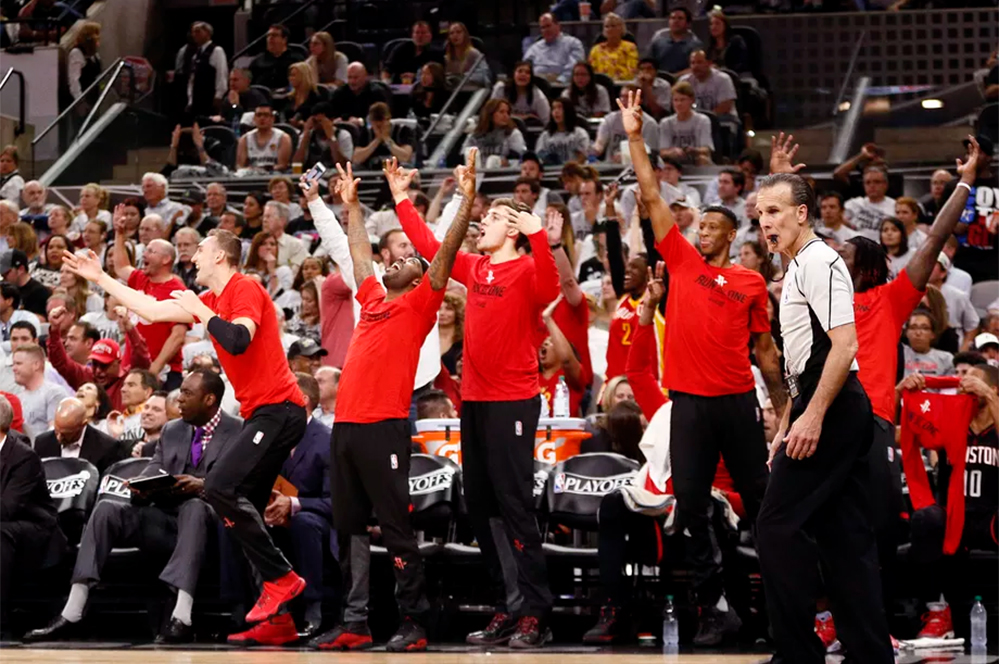 This was one of the greatest games in Rockets history

Nothing could have prepared us for this.

The Houston Rockets, who shot terribly in the first round of the 2017 NBA Playoffs and slumped heading into the playoffs, handed the 61-win San Antonio Spurs probably the biggest ass-whooping a healthy 60-win team has ever received in the NBA Playoffs. James Harden didn’t play in the fourth quarter, and the Rockets won 126-99.

Harden needed just three quarters to amass 20 points, 14 assists and 4 steals. He found his teammates all over the floor, particularly Trevor Ariza, who scored 23 points on 50 percent shooting overall and from deep, Clint Capela, who scored 20 points and grabbed 13 rebounds, and Ryan Anderson, who broke out of the freezer to shoot 4-10 from deep and drop in 14 points.

The Rockets won by 27 points, and that undersells what a thorough domination this was. The Rockets were up 69-39 at halftime and extended their lead in the second half. At one point, they were up 39 points. They had 30 assists on 40 field goals. They out-rebounded the Spurs, dominated them in the paint and from outside. They shot 22-50 from deep, a franchise record for deep shooting proficiency.

And best of all, LaMarcus Aldridge looked like he belonged in the D-League, rather than looking like a Hall of Famer.

Houston came out red hot. Harden, Ariza and Ryno all hit three-pointers in the first few minutes, the best sign possible that this team had obliterated the lid on the rim that existed in the Thunder series. The Rockets grabbed an early lead, and were playing well.

And then they just got better and better and better. The Rockets had a 15-point first quarter lead before the Spurs got it to 11 when the buzzer sounded. Of course, the Bench Kraken would not be satisfied with simply maintaining a lead. By the time Harden returned to the floor, the Rockets were up 22 and in full, devastating control.

It didn’t stop there. Harden pulled the strings of the offense like the fully rested MVP he is, orchestrating everything to perfection. Double-teamed up high? Behind-the-back pass to a Ryan Anderson three-pointer. Hedged on the pick-and-roll? Split the double team and find Clint Capela for an alley-oop. Have Kawhi on you? Call up Capela, get a pick, switch with a big and go to work.

Gregg Popovich called a timeout when the Rockets went up 5-2 in the first quarter on a Harden corner three-pointer, barking at David Lee, who had come out to guard Harden. Popovich sensed something had gone wrong, like he’s done millions of times in his long and storied career, and called a quick timeout to adjust.

It turns out, everything was wrong for the Spurs.

There was a little funny business in this one. Close to the end of the third quarter, Ariza and Jonathon Simmons got into a little shoving match. Following that, Dewayne Dedmon got into a scuffle with James Harden. Nene broke it up, but did so by putting his hand on Dedmon’s throat and got ejected.

Patrick Beverley, who scored just 7 points but was a monster on defense once again, could not let this injustice go. Dedmon was shooting free throws early in the fourth quarter, and Bev yapped at him enough to draw some sort of (likely vulgar) response. Dedmon was assessed a second technical foul and hit the showers himself.

If the NBA wants to not be accused of some sort of rigging, Nene will play Game 2. The Spurs will play much better. This blowout would scar lesser teams, but not a Popovich squad. I think the Spurs will likely win Game 2, but it kinda doesn’t matter. The Rockets have taken home court advantage, and they have put the league on notice.

They beat the Thunder in five games while never playing well. This is what happens when they do. They are an unstoppable offensive force. There is no remedy for the barrage of threes.