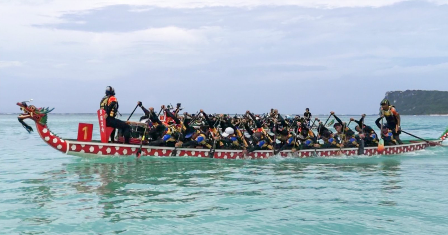 The Philippine SAG-1 Dragon Boat Team brought home six (6) gold medals and two (2) overall champion awards after ruling in the 4th Guam Dragon Boat Thanksgiving Festival, held in November 23 and 24 in Guam, USA. The Filipino paddlers enjoyed a sweeping win as they finished first place in all the events that they took part in.

The teams from Japan, Singapore, and Hong Kong nabbed podium finishes in the mixed 200- and 400-meter standard (22-seater) races while Philippines’ SAG-1 surged to the top with registered total times of 2:02.46 and 4:41.27, respectively.

“We were overwhelmed with the results, but I also believe that the two months of hard training by the team led us to victory,” said SAG-1 Dragon Boat Team Captain Michael Lara.

Lara also talked about the benefits of the sport as it continues to inspire and encourage more Filipinos, especially because SAG-1 is comprised mainly of working professionals who carve out time during weekends to train with the team.

“Dragon boat promotes the value of working as one solid unit to achieve a common goal, no matter how challenging it may be. As we apply this during training, we hope that it also translates to the paddlers’ lives outside the boat, in their homes, community, and society,” he added.

The Manila-based crew will next contend in the Philippine Canoe-Kayak Dragonboat Federation (PCKDF) Club Crew Challenge Series 4, which will be held on December 15 in Malawaan Park, Subic.