MILO, POC, PSC, PHISGOC Unite in Energizing a Nation of Champions for the 30th SEA Games 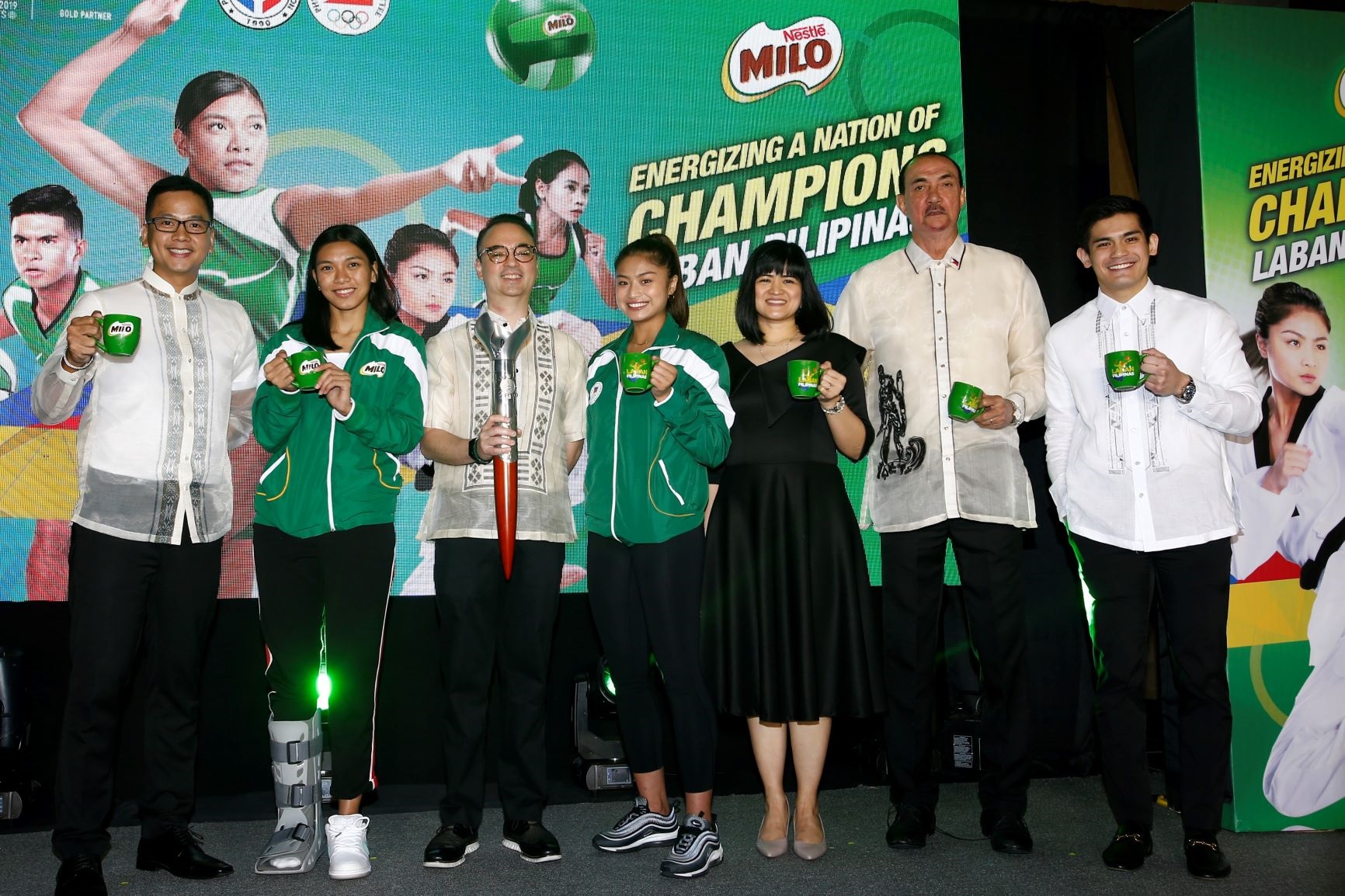 Joining them on stage were national athletes and  MILO Sports Program graduates and ambassadors Alyssa Valdez (MILO Champion - Volleyball), Pauline Lopez (MILO-Philippine Taekwondo Association), and Kiefer Ravena (MILO BEST Center - Basketball), who each shared their own inspirational stories of starting out in MILO sports programs at a very young age and now representing the country in a global stage. They also harped on the positive effect that the crowd’s energy can have on them during competitions.

A Shared Call of Unity

This year’s theme and motto, “We Win As One,” celebrates unity in diversity and heralds the importance of teamwork and sportsmanship among Filipinos and neighboring countries in the region. This aligns with the lifelong values learned through sports that MILO has been advocating in its grassroots programs such as the MILO Sports Clinics, MILO Little Olympics, MILO Barangay Liga, MILO Champ Camp, and National MILO Marathon, along with the true essence of what it means to be a champion in sports and in life through its revered Champions, ambassadors and partners.

“As a longtime supporter of Philippine sports, it is with great honor and privilege that MILO comes in as a gold partner for the historic 30th SEA Games,” said Veronica Cruz, Vice President, Nestlé Philippines-MILO. “As our athletes and local sports communities continue to work hard in the preparation for the SEA Games, we want to help energize the country to cheer them on and let them know that we are all with them in defending our homecourt, win or lose.”

Philippine Sports Commission Chairman and SEA Games Chef De Mission Butch Ramirez said, “In this significant time for Philippine sports, we must push all our endeavors to its advancement. MILO, who we have tirelessly worked with to promote sports development and values formation at the grassroots level nationwide, has long made valuable contributions to the Filipino sporting community. We are happy to declare our partnership with MILO to strengthen our international foothold in sports and to “Win As One” as we energize a nation of champions. Laban Pilipinas!”

As the anticipated event draws near, POC, PSC, PHISGOC and Team Pilipinas are hard at work to field a successful staging and performance in the biennial meet. At the heels of pressure of replicating the 2005 success, Chef De Mission Ramirez assured that the athletes will bring out their best in the competitions.

“Heart and dedication will be front and center from our Team Pilipinas delegation,” said Ramirez. “Values such as discipline, perseverance, and sportsmanship speak volumes to an athlete’s character, and I believe these attributions are as vital as to winning gold medals,” he said.

“As the competition unfolds, the entire nation will witness our Filipino athletes’ relentless drive in bringing glory to our country, bounded by the spirit of true sportsmanship. Such display of character will serve as a gold standard to parents and children on how starting young into sports promote character forming values that contribute to nation building,” said Lester P. Castillo, Assistant Vice President, Nestlé Philippines-MILO. “It is this very reason why MILO remains committed to grassroots sports development together with the PSC, the POC and other partners. We aim to continue nourishing the entire nation's ambitions fueled by the nutritious energy MILO provides.”

The highly competitive nature and prestige of the SEA Games meant rigorous preparations from the MILO champions themselves, as Valdez and Lopez aim to deliver a winning performance ahead.

“To be a part of the national team for volleyball means a great deal to me, which is why I am focused to train hard for this competition,” said Valdez who is set to represent the country for the third time. “We the Team Pilipinas will surely give out our best fighting spirits on stage and we hope this will inspire many young athletes to aspire for their sporting dreams and bring glory to our nation someday.”

Taekwondo’s Lopez, champion of the 2015 SEA Games, is also on the run to capture another gold medal and to show the limitless capacities of women in sports. “Because of the foundation laid by MILO and the Philippine Taekwondo Association in my sporting journey, I am able to take on great opportunities such as being included in the SEA Games roster,” the multi-medalist jin said. “I am dedicating all my hard work to my countrymen, especially to my fellow Filipinas, who may find strength and encouragement from all women athletes competing in SEA Games.”

Six-time National MILO Marathon Queen Mary Joy Tabal and 2018 National Finals Runner-Up Jerald Zabala are also getting ready as the top bets in the athletics bid. Tabal, who is currently in Japan for a 10-week training, is eyeing for her second gold medal after winning in 2017. Meanwhile, Zabala won recently in the Lucena leg of the 2019 National MILO Marathon 21K race as part of his preparations for the big event.

“It would be an honor to represent the country again,” Tabal said previously after winning the National MILO Marathon National Finals in 2018. “As I look back in my athletic journey, I am stunned to see the outcome of the work I have done, from being a bronze medalist in MILO Little Olympics in my earlier years to a two-time SEA Games athlete. The outpouring support from MILO and the country fuels me with great motivation to do well. I am determined to give my all in this competition and with the country on our side, we will have the energy to power through the challenges.”

Inspiring the Nation to Support Our Athletes

In line with the hosting of the 2019 SEA Games, a series of inspirational videos were also launched featuring MILO Champions Valdez and Lopez, gearing up for their respective national team stints. The materials captured the moments where the athletes displayed discipline, confidence, and determination during their training and the rousing effect of having a nation of champions encouraging them on every step of the way.

The 30th SEA Games is from the 30th of November to the 11th of December. As the host the much-awaited sporting event, the Philippines aims to hold the largest SEA Games ever with 56 sports, an estimated 9,840 athletes and team officials, 2,050 technical officials, 1,500 press and media attendees, 12,000 volunteers, targeting as many as 500 million viewers all participating in a sporting experience of a lifetime. It will be held in three key hubs: the main hub will be in Clark, Pampanga (in the newly-constructed New Clark Sports Complex), the secondary hub being the Subic Bay Freeport Zone, and the tertiary hub situated in Metro Manila and nearby areas.

MILO will be present in identified SEA Games fan zones where spectators can cheer for Team Philippines and enjoy free samples of cold cups of MILO and grassroots sports activities.