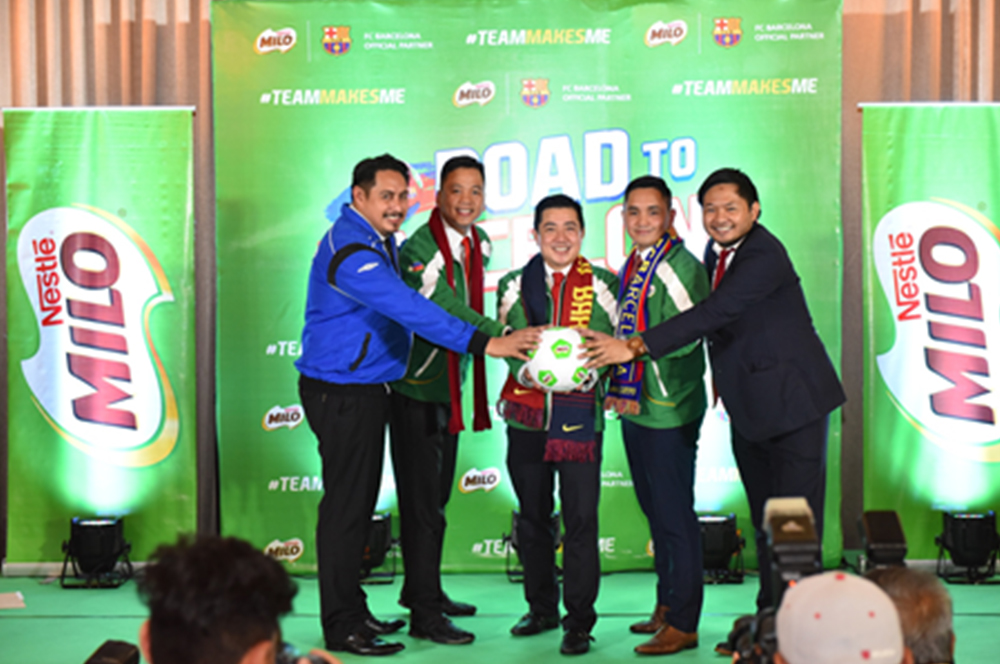 MANILA, Philippines, 16 August 2017 – Two global sports icons, MILO and FC Barcelona, embark on a four-year partnership aimed at enhancing the quality of life of children through a more healthy and active lifestyle. The purpose-driven partnership brings together MILO and FC Barcelona’s shared belief of youth development through sports and the values learned from them. This year, MILO Philippines launches the Road to Barcelona—a selection camp that will scout for the next football champions and give them a once-in-a-lifetime experience training  in Camp Nou, the home stadium of FC Barcelona.

By linking with FC Barcelona, MILO Philippines looks to help build the dreams of kids by providing them access to world-class coaching and venues, and inspiring them to be physically active and healthy through sports. The global partnership was first announced in November 2016 and MILO has since become the official cocoa malt beverage of FC Barcelona. With the integration of FC Barcelona, MILO Philippines will continue to grow and support its grassroots sports programs while leveraging on the culture and values unique to the club.

“We are proud and honored to have one of the biggest football clubs in the world share in our commitment to build champions through sports. It is our hope that this values-driven partnership helps build kids’ dreams and realize them through the Road to Barcelona program. We’re inviting the passionate local sports community to be a part of this four-year journey with FC Barcelona,” said Willy de Ocampo, Business Unit Manager of MILO Philippines.

This year, MILO Philippines will be sending a team of 10 kids to participate in an international training camp to be held in Camp Nou, FC Barcelona’s home stadium. More than the skill level, the players will also be chosen according to the MILO and FC Barcelona values they exemplify. The selection criteria puts importance on the right mix of values (60%) and skill (40%) exhibited by these young athletes through the sport. FC Barcelona prides itself with five principal values that are aligned with the spirit of MILO’s brand essence of nourishing ambitions—humility, effort, ambition, respect, and teamwork.

During the local selection camp happening on September 2 to 3 at the McKinley Hill Stadium in Taguig City, a pool of invited participants from different football communities in and around Metro Manila will undergo extensive training to be included in the official shortlist. Two deserving members of the team will be granted an all-expense paid trip in recognition of the skills and values they espouse. While  MILO and FC Barcelona will be granting the two kids an opportunity they would otherwise never have imagined—to train with international pros for one of the world’s most prestigious sports organizations, the remaining eight will be chosen based on the local camp ranking system.

An expert panel composed of executives and officials from MILO Philippines, the Philippine Football Federation, IGNITE Sports Group, and the visiting FC Barcelona Spanish coaches will carefully deliberate on the most deserving young footballers in the invitational camp. The selected group will be representing the country during the MILO-FCB camp in Barcelona happening on October. The four-day program in Camp Nou is highlighted by the Escola football clinic, Camp Nou classroom sessions and museum visit, city tour, and interactions with the FC Barcelona coaches and teams from participating MILO countries such as Malaysia, Indonesia, Vietnam, and Columbia, among others.

Over the next four years, there will be key initiatives from the brand and football club to energize kids both locally and globally. Tournaments, special trainings, and merchandising efforts are among the many plans in store for the different MILO markets worldwide.

“MILO believes that so many children here in the country can greatly benefit from getting into sports. It’s time for Filipino talent to take on the world stage. We want this to be a meaningful endeavor—one that builds dreams, makes them a reality, and shares the journey to the next generation of champions on and off the pitch,” said de Robbie De Vera, Sports Marketing Executive of MILO Philippines.