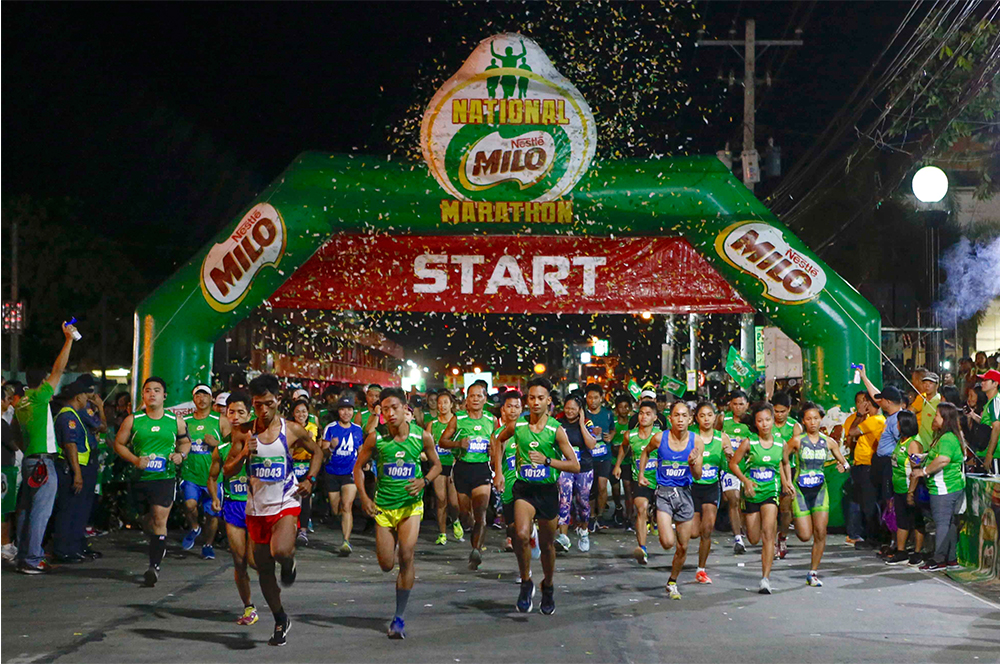 First race of the season gathers around 12,000 pacesetters

Urdaneta, Philippines, 16 July 2017 – In true festive fashion, the city of Urdaneta showed its overwhelming enthusiasm in the first race of the 41st National MILO Marathon. Around 12,000 runners hit the streets to race the finish line. Running veterans Julius Sermona and Christabel Martes took the spotlight and placed first in the 21K male and female categories, respectively. They each took home the top purse of P10,000 in cash and a trophy, and booked their slots to the National Finals in Cebu on December 3 to try and claim the MILO Marathon King and Queen titles.

Despite the lack of training, former national athlete and running veteran Julius Sermona was able to hit his personal target. Having had a hectic spell of activities as an air force member, Sermona made up for the shortage and pushed through the competition with resilience and will. “The first few kilometers have not been easy for me,” he said. “It was difficult to pass through the lead, but I just kept my head in the game which eventually helped me sprint faster in the last eight kilometers.”

Sermona believes that joining marathons not only stimulates one athlete’s passion for running, it also provides physical fitness. “Running, for me, is all about health,” he said. “Physical fitness is integral to a runner’s development, especially to the kids and I am very proud to be a part of a community that promotes these values.”

In the distaff side, former SEA Games athlete Martes easily raced her way to the finish line. Augmented by the spacious roads and smooth terrain, the Baguio native revealed that the features enabled her to comfortably outpace her closest competitors, “I just stayed at my own pace,” she said. “I am very pleased with the route and it helped me stayed in the lead from start to finish.”

With a new feather on her cap, Martes shared that humility remains to be her most important value. “Whenever I win, I always remind myself to be humble,” she said. “I am happy and thankful to be called as an inspiration to many, and I hope that I continue to do so while keeping my feet on the ground.”

More than a staunch advocate of Philippine sports and Filipino athletes, the National MILO Marathon is also a platform that empowers children nationwide. For the past 7 years, the National MILO Marathon’s Help Give Shoes advocacy, in partnership with Department of Education, has inspired 70,000 aspiring athletes to fulfill their dreams by donating brand new pairs of running shoes. This year, the Help Give Shoes advocacy will be donating 5,000 pairs to underprivileged school children.