A miracle pup, this runt of the litter

Because no one wanted to buy or adopt this runt of the litter, she was about to be thrown away like garbage. 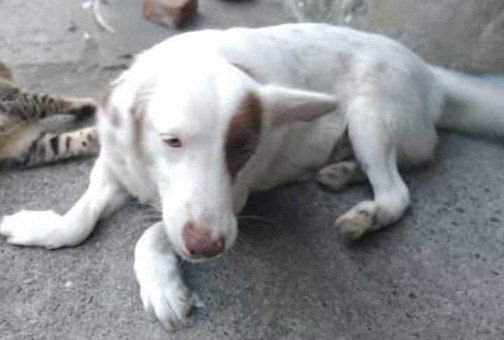 Because no one wanted to buy or adopt this runt of the litter, she was about to be thrown away like garbage.

Karla Asteria and her daughter Camille Magdangal decided to give her a home. They named her Cookie because she had a black patch on one eye.

“The dam gave birth numerous times to pups who were sold or given away. Cookie had  five siblings. Only Cookie and another one were left. Our neighbor said, ’Wala na kasing may gusto. Kung hindi ninyo kukunin, ililigaw na lang namin’,” Karla recalled.

“My daughter told me to get the other one. When I bent to get the pup, Cookie stood on two legs, as if she was asking me to carry her. We fell in love with her instantly, “ Karla said.

Cookie, then two months old, was already a very sweet dog.   But Karla and Camille noticed her four legs were all deformed.

“While growing up, we noticed her limbs, all four, has a deformity, but she can walk, run, and jump, and had a healthy appetite, “ Karla said.

“At  five months old, she suddenly could not stand or walk, and cried in pain all the time. She pooped and urinated where she was. It was like her limbs were paralyzed!” Karla added.

From then on, Karla and Camille “would lift her head up for her to eat and drink. We would take her outside to do her business lying down. I was frantic!”

During this time, Karla and Camille did not have a job.  They relied on online selling which was not that profitable “so we cannot afford to take her to a vet,” Karla said.

“Luckily, there is a Facebook pet group where proven home remedies are shared by the admins. They recommended that we give Cookie calcium lactate. I bought it from a feed store, “ Karla said.

She added: “I also searched the internet for more information, and found out that dried egg shells crushed to a powder is an excellent source of calcium, so I sprinkled them on her meals.  After two weeks, of taking calcium and eggshells, combined with sunbathing in the morning and  massaging her limbs twice a day, she  started to lift her head and to sit.”

Then, to our delight, she learned to drag her hind legs, Karla said.

“That's when I posted about her. A lady messaged me, and she said she sent my video of Cookie dragging herself to a good samaritan in Australia. The woman sponsored Cookie’s medical check-up. The vet said Cookie had angular limb deformity caused by severe calcium deficiency,” Karla said.

“In September, 2018, she sent a wheelchair, but Cookie was walking on her own by then, slowly… but she was able to walk short distances, “ Karla said.

“We tried out the wheelies but she was afraid of it, so the wheelies  was sent to Naga, Cebu later on to a dog who needs it more, “ Karla said.

Today, one-year-old Cookie, the runt of the litter, the pup with deformed legs, can now walk, run and jump.

When she greets Karla and Camille when they come home, she  lies on her back and rolls over.

The love of Karla and Camille for the pup and the determination of this pup to  get up and walk made Cookie’s complete healing a reality.