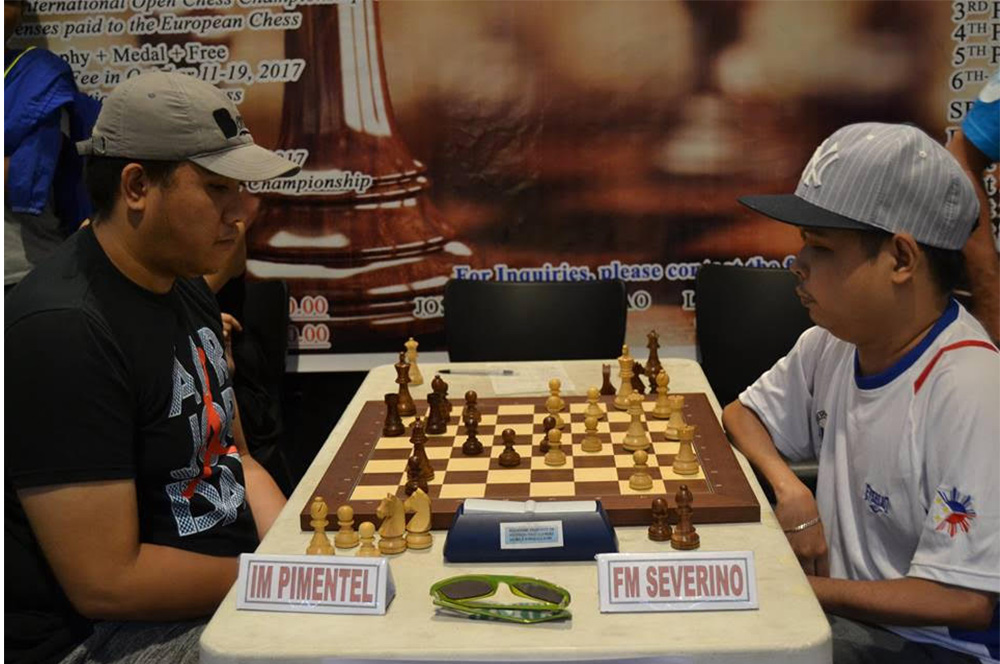 It was tough but, sweet for FIDE Master Sander Severino after going through the best-of-5 extra match against International Master Joel Pimentel after both ended with identical 6.5 points at the end of Round 7 in the Piaya Network Broadcasting Corporation/6th Negros Closed Chess Championship at The District at the Alaya Malls in Talisay City.

In Round 7, FM Severino defeated National Master Rolando Andador with French defense white unusual move in 39 moves to earn his 6th win in the tournament as IM Pimentel edged PO3 Ernie Abanco in 32 moves in Schmid Benoni opening – also for his sixth in seven outings.

During the best-of-5 face-off, with 10 minutes each game, as expected both mind masters played even to end Round 1 on a draw with Queens Gambit opening.

In Round 2, FM Sander Severino ruled over IM Pimentel on Colle System opening to book a 1 game lead but, IM Pimentel took Round 3 on Queens Pawn opening for the equalizer.

The champion received a prize of Php 15,000 plus trophy, medal and free registration to the Negros International Open Chess Championship on October 11-19, 2017 including a trip to either a European or Asian Tournament next year.

The second and third placers, on the other hand, took home Php 13,000 and Php 10,000, respectively, along with trophies, medals and free registration fees to the Negros International Open Chess Championship.

For sponsor Antonio Ivan Aguirre, the last five days displayed high level of play resulting to decisive win or loss – wherein friends off board became warriors during the time of play. “You will need this kind of attitude as you will later play at a grander scale,” he said. “Me, my dearest chess buddy – Hugo Villanueva together with my colleague, Cris Angelo “Nene” Samson, and our families were very pleased with the results,” he added.

Aguirre reiterated that everything started with a vision. “Like what I said ten years ago, we are dreamers and intend to make this dream come true. That this October 2017, during the Negros International Open Chess, we intend to bring in more sponsors joining us – means more cash awards at stake that will compensate the efforts and hard work rendered,” Aguirre stressed.

He also added that they have invited foreign grandmasters to elevate the level of play as GM Nigel Short already confirmed his participation. “I expect more foreign GMs to sign in with our local GMs and masters providing the needed challenge,” he said. “We will also make our tournament into a FIDE rated tournament with our tournament organizers getting credentials in running tournaments at international standards. Further, we are going to bring in more logistics like more electronic chess boards linked into live games so that the global chess community will watch online our games,” he added.

Aguirre also disclosed that they will make their tournament meet the international standard   in   terms of venue, accommodations for out of town players, and compliance to FIDE rules. “I believe that we can join hands in making this happen. Like what I said before this is not the work of the Aguirres and the Villanuevas, and the Piaya Board of Directors alone. This is our collective effort in showing to the world that we can make things happen,” he stressed.