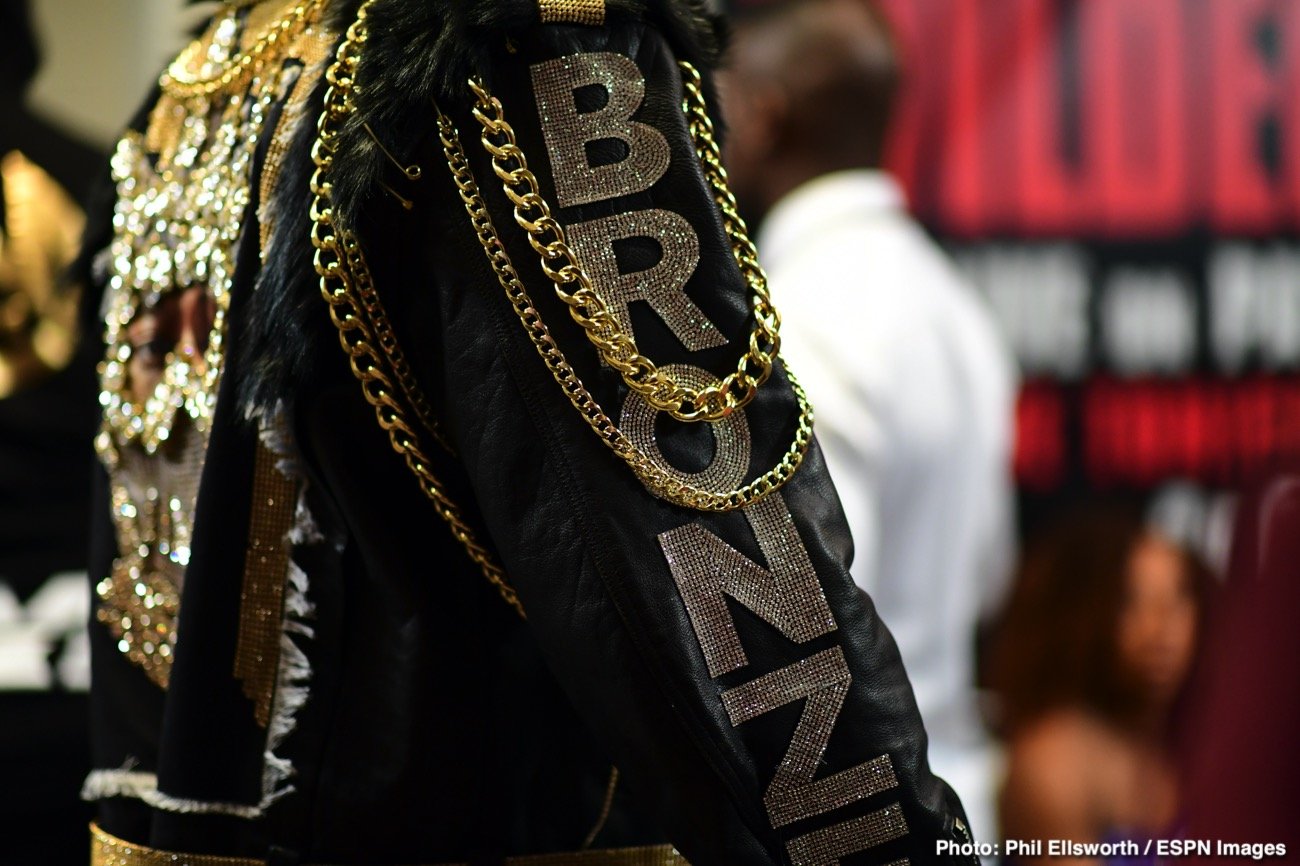 The former WBC heavyweight champion Wilder (42-1-1, 41 KOs) made this on his Instagram in what appears to a message to Dillian:

“I believe in Glaz Za Glaz!!! [eye for an eye],” said Wilder, with part of his message written in Russian.It’s understandable why Wilder chose to surface last night, given all the trash-talking that Whyte (27-2, 18 KOs) did while the ‘Bronze Bomber’ held the WBC heavyweight title from 2015 to 2020.

Whyte had been ranked as Wilder’s #1 contender since 2017, and he wanted him to defend against him.

If Wilder gets blown out by Fury like last time they fought on February 22, then Whyte can pay him back. Dillian already gave Wilder a ton of grief after he lost his WBC title to Fury, but he’ll likely continue if he gets beaten for a second time.

Whyte will get his chance to take a shot against Wilder later on this year when he faces WBC heavyweight champion Tyson Fury in their trilogy fight, which is tentatively to take place on December 19.
Fury Freed Up To Face Joshua
“I know he has something special to come back from this, and he has to do a job in what will be a huge rematch,” said Eddie Hearn to Sky Sports Boxing on Whyte needing to avenge his 5th round KO loss to Povetkin.

“One of the stumbling blocks to making that fight in 2021 was Dillian Whyte,” said Hearn on the Tyson Fury vs. Anthony Joshua unification. “So we know that Alexander Povetkin won’t be called for that mandatory even though he sits at the #1 position.

“So I guess that frees up Tyson Fury to fight Anthony Joshua after the Deontay Wilder fight. But for me, I wanted Dillian Whyte to get that opportunity, and I felt like a good win tonight would have gotten him that, and I felt like he deserved that,” said Hearn.

For the good of the sport, Fury and IBF/WBA/WBO heavyweight champion Anthony Joshua need to face each other in early 2021. Hearn should forget about trying to use Whyte as interference for Joshua and let the fans see these two battle it out.

If Joshua is as good as Hearn seems to think he is, then he’ll beat Fury and take the #1 spot as the best heavyweight on the planet. Hearn needs to let Joshua fight Fury without Whyte slow things up. If Whyte beats Povetkin in their rematch in December, then he can always face the winner of the Joshua vs. Fury contest in 2022.Hearn Wants Whyte To Regain His #1 Position
“He did lose, and I feel like he has to come back and try and beat Alexander Povetkin,” Hearn continued in talking about Dillian’s loss.

“I know AJ is over there, and he wants to become undisputed, but right now, our thoughts are with Dillian Whyte to try and have him come back in the saddle to try and regain that #1 position.

“I believe the WBC will say, ‘if he can beat Povetkin in a rematch, he will go back to the mandatory spot.’ But that will slow the process down and allow Tyson Fury probably some breathing space,” said Hearn.

It’s a risky situation with Hearn letting Whyte, 32, face Povetkin a second time because if he losses that the second fight, it could be a career-ender for him. Hearn feels that Whyte has to come back, and that makes sense.

Losing to a 40-year-old fighter, it’s not the same as it would be if Whyte had lost to a younger opponent. That’s why it was a bad idea in the first place for Whyte to take on a guy Povetkin’s age.

Even if Whyte had won, he wouldn’t have received any credit from boxing fans. It was a no-win situation that Whyte put himself in by taking this match against Povetkin, and you’d like to think that Hearn attempted to talk him out of it.

Whyte now has no other choice but to face Povetkin again, and he’s going to be taking a significant risk in doing so. The money will be good for the 32-year-old Whyte, but he’ll potentially be losing out on millions in future earnings if Povetkin beats him again.

Alexander Povetkin Deontay Wilder Dillian Whyte
Dillian Needs To Rebuild
“For now, I think right now it’s getting over the shock of Dillian Whyte, making sure he’s OK, making sure he can bounce back and make sure that we can give him the support and build him up for a big rematch,” said Hearn.

“He ]Whyte] put in a lot of work into this camp. He was over in Portugal for four or five months, and he put in everything and came into it in the best shape of his life.

“He was finding a way through the rounds to take control over the fight, and it looked like it was over. One-shot just changed everything. It’s amazing,” said Hearn.

Typically when a promoter rebuilds a fighter, they start them back them slowly against opposition that they’re confident they can beat. Hearn isn’t doing that here in putting him back in with Povetkin.

What Hearn is doing here is called ‘gambling,’ and that’s never a good thing to do if you’re not sure about the results. It’s foolhardy for Whyte to face Povetkin again, and he and Hearn could wind up sorry later for choosing to go down this path.

There’s less for Hearn to lose in Whyte getting beaten again, considering that he has his vast Matchroom stable of other fighters, many of which will do well and bring in significant money. But for Whyte, it’s going to be bad for him, and he could end up watching his career implode.