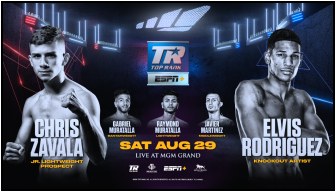 “I like staying active and putting on a show for the fans,” said Rodriguez, who is trained by the legendary Freddie Roach. “You’ve seen two big knockouts from me inside the ‘Bubble,’ and I don’t see my third fight being any different.”

Rodriguez (8-0-1, 8 KOs), like many of his nation's sporting heroes, started on the baseball diamond. He soon found out he enjoyed fighting more than pitching and hitting, and thus began his ring journey. Following a successful amateur career in his homeland, he turned pro in November 2018 and signed with Top Rank early the following year. Apart from a headbutt-induced technical draw, Rodriguez has knocked out every opponent he’s faced. He made his “Bubble” debut July 2 and knocked out Danny Murray with a power jab in the opening round. Nineteen days later, he stopped Dennis Okoth with a left cross in the second round. Wilson (9-2, 6 KOs), from Fairmont, W.V., has won four fights in a row and has yet to be knocked out as a pro.

Unbeaten 20-year-old junior lightweight prospect Chris Zavala (6-0, 3 KOs) returns to the ring for the first time since last September and will fight Anthony Chavez (8-1, 3 KOs) in a six-rounder. Zavala, from Long Beach, Calif., turned pro under the Top Rank banner in June 2018 after going 136-9 as an amateur.

Bantamweight prospect Gabriel Muratalla (4-0, 3 KOs), the fighting preschool teacher who is 2-0 inside the “Bubble,” will face fellow unbeaten Justice Bland (2-0) in a four-rounder. Raymond “Danger” Muratalla (9-0, 7 KOs), Gabriel’s younger brother, will fight the battle-tested Cesar Valenzuela (15-6-1, 5 KOs) in an eight-rounder at lightweight.

Milwaukee-born southpaw Javier Martinez (1-0), who now trains with Robert Garcia, will fight Rance Ward (4-1-1, 2 KOs) in a four-round middleweight bout. Martinez made his pro debut inside the “Bubble” July 14.

Ernesto Mercardo, an amateur standout who was recently the lightweight runner-up at the U.S. Olympic Trials, will make his professional debut in a four-round lightweight bout against an opponent to be named.

About ESPN+
ESPN+ is the industry-leading sports streaming service from Disney’s Direct-to-Consumer and International (DTCI) segment and ESPN. Launched in April 2018, ESPN+ has grown to 8.5 million subscribers, offering fans in the U.S. thousands of live sports events, original programming not available on ESPN’s linear TV or digital networks, as well as premium editorial content.

Fans subscribe to ESPN+ for just $5.99 a month (or $49.99 per year) at ESPNplus.com, ESPN.com or on the ESPN App (mobile and connected devices). It is also available as part of The Disney Bundle offer that gives subscribers access to Disney+, ESPN+ and Hulu (ad-supported) — all for just $12.99/month.