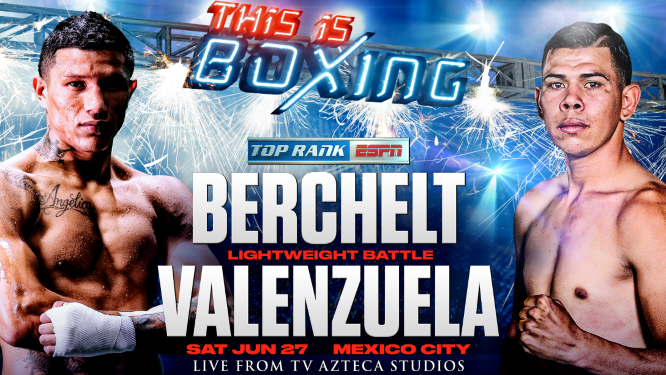 Miguel Berchelt is one of the most exciting fighters to watch today: It’s hard for the junior lightweight titlist to make a non-exciting fight.

Berchelt is hard-charging and aggressive with good power, and he’s waged wars vs. Francisco Vargas and Takashi Miura. He’s just so much fun to watch. This fight will be contested at 135 pounds instead of Berchelt’s usual 130.

Miguel Berchelt will get a soft touch in his first fight since the coronavirus pandemic. But Berchelt, one of the best 130-pounders in the world, isn’t planning to take Eleazar Valenzuela lightly when they meet in a TV Azteca studio in Mexico City on Saturday night in a fight you can watch on ESPN.

Berchelt has bigger plans ahead of him, and an upset loss to Valenzuela in this non-title bout would derail his career.

“I know this is not the kind of fight I am used to; it’s not a championship fight and the opponent is not like the last ones, but I am looking forward to going in the ring. I haven’t fought since last November and I need to be active,” Berchelt

I have learned that there is no small opponent in the ring. All the fighters have dreams and I have to take this fight seriously.”

There are plenty of reasons to watch Berchelt tangle with Valenzuela. Here are three of them. (Taken from Forbes )