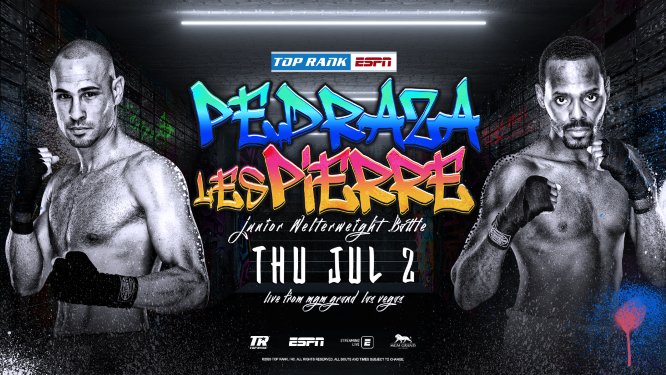 LAS VEGAS —Jose Pedraza and Mikkel LesPierre will give it another shot. The junior welterweights will face off in the 10-round main event Thursday, July 2 from the MGM Grand Conference Center—Grand Ballroom. Pedraza-LesPierre was originally scheduled for June 18, but the bout was postponed after LesPierre’s manager tested positive for COVID-19.

Week 4 of the Top Rank on ESPN summer series begins Tuesday, June 30 at the MGM Grand, when top junior welterweight contender Alex Saucedo faces Sonny Fredrickson in a 10-round showdown.

The Pedraza-LesPierre and Saucedo-Fredrickson cards will air on ESPN and ESPN Deportes beginning at 8 p.m. ET/5 p.m. PT.

“Mikkel and Jose deserve this opportunity, and I commend both camps for agreeing to reschedule this fight on short notice,” said Top Rank chairman Bob Arum. “Alex Saucedo is destined to be a world champion, but he has an incredibly tall task in Sonny Fredrickson. We have another great week in store at MGM Grand.”

Saucedo has fought only once — a first-round knockout over Rod Salka — since he was knocked out by Maurice Hooker in November 2018 in a bid for the WBO junior welterweight world title. The Oklahoma City product is entering his second fight with head trainer Pedro Neme and will move closer to a second world title opportunity with a victory over the 6-foot-1 Fredrickson. From Toledo, Ohio, Fredrickson is a former U.S. amateur standout who is hoping to re-establish his momentum following a majority decision defeat to Samuel Teah last November.

“I have gotten a lot of quality sparring during the last few months, and I believe that’s going to show on June 30,” Saucedo said. “We have done 130 rounds in this camp sparring three times a week. We were able to get some taller guys to prepare for what Sonny brings to the table. I’ve worked on the things I need to win this fight. I’m still the same aggressive fighter, but we put a lot more movement in there. I’ve gone back to basics.”