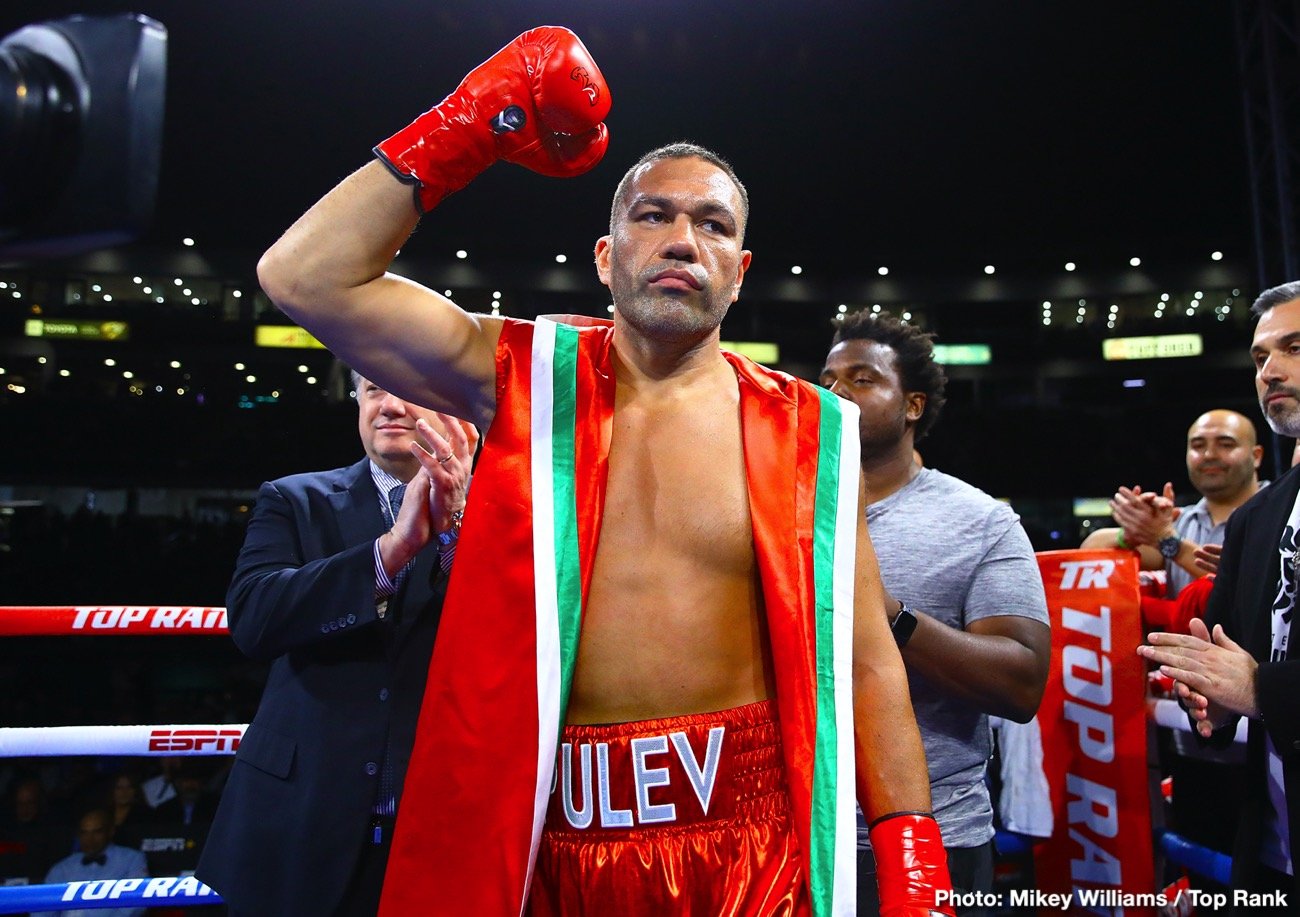 He’s back on his bandwagon about his fighter Kubrat Pulev beating Joshua this year when he fights him for his IBF heavyweight title.Arum says he’s been in the sport of boxing for many years, and he’s seen enough to know that IBF/WBA/WBO heavyweight champion Joshua (23-1, 21 K.O.s) isn’t as good what people think he is.

Bob points out that his former Top Rank fighter Andy Ruiz Jr knocked out Joshua, and he’s not a big puncher. So if Ruiz was sable to knockout Joshua, then Pulev (28-1, 14 K.O.s) will do the same thing.It will be a crushing blow to Matchroom Boxing promoter Eddie Hearn if Joshua loses to Pulev because he’s counting on the Joshua-Fury fighting twice in 2021. Those contests will bring in a lot of money.

“This is bizarre in discussing a potential fight between Fury and Joshua, four to six weeks ago, we arrived at this formula that the fight would be 50-50 and the next fight would be 60-40 depending on who won the fight,” said Arum to Seconds Out.
“So for me this old news. Nothing else is decided, and there’s a lot of issues with television and so forth that I’m sure with time will be decided. There are only two little problems.
“One problem is my guy Fury still has a match against Wilder, and Wilder is not a pushover. Remember how everyone thought Wilder was going to be for Fury going into the last fight. Well, I think we’re going to see a different Wilder for this third match for these two guys. And as far as Joshua is concerned that my guy [Kubrat] Pulev, and I co-promote Pulev is going to knock Joshua on his a–.

“Therefore, that’ll be the end of a Fury-Joshua fight. I really believe that. So, again, one, there was no news made today, and two, I don’t think Fury and Joshua are going to happen.

“Certainly, not next year. That shouldn’t be a headline because the reason I don’t think it’s going to happen is because my guy Pulev will beat the crap out of Joshua when they fight later this year,” said Arum.
It’s unclear whether it was Hearn or Fury that chose to reveal the information on the two-fight deal with Joshua. They both opened their traps on the same day this week in explaining the details.
“Eddie Hearn was looking to get some press,” said Arum on why Hearn made a statement on the two-fight deal for the Joshua vs. Fury fight. “Otherwise, none of us thought it was newsworthy to make a statement,” said Arum in why the announcement was made on the Joshua vs. Fury two-fight deal for 2021.
“Obviously, these guys want to fight each other, and obviously there was going to be no impediment with everything being equal that they were going to fight. This is not a news story.

“How else would you do a fight other than 50-50? Forget about which television is going to do it. There is no news. This is obvious, and if you’re going to do a rematch and everyone agreed six weeks ago that if they fight once and build it up, why not do a rematch?

“How are you going to do it? Everyone said, ‘60% to the winner and 40% to the loser of the first fight,’ which is what we did with Wilder and Fury going into the third fight. It’s not news, man. It’s not news. Nobody is contemplating all that stuff.

“It could be like an arrangement that ESPN and FOX had in the last event. Anything is possible. Again, I’m not getting in the weeds and negotiating that now because it ain’t going to happen,” said Arum.

“I believe I’m capable of making that determination because I promoted virtually every one of Andy Ruiz’s fights prior to him fighting Joshua,” said Arum in saying why he believes Pulev will be A.J.

“And if Andy Ruiz can destroy and knockout Joshua, then Joshua is NOT what he’s touted to be. In the second fight, it hasn’t changed my mind because Andy came in obscenely overweight and not prepared.

“So Joshua staying away from him and beating him means nothing. I don’t think Joshua is the fighter that he’s cracked up to be, and if Andy Ruiz can destroy Joshua, Pulev will have a lot easier time destroying Joshua than Ruiz did.

“And that’s what I base my opinion on, and I really believe that Pulev not only has a good chance against Joshua, but he’ll also beat and knockout Joshua. Nothing would please me more than for Pulev and Fury to do unification,” said Arum.

We already know that Joshua isn’t what he was touted to be. Whyte was the first one that exposed Joshua as not being as great as his fans, and Hearn says he is. In Whyte’s fight with Joshua in 2015, he had him hurt. Wladimir Klitschko was the second one to expose Joshua in 2017, and then Andy Ruiz Jr. was the third.

Dillian Whyte Will Get His Shot
“I think the heavyweight championship should be unified. Then I would have absolutely no problem with the winner of that fight take on Dillian Whyte if Dillian Whyte is still undefeated because he’s a class heavyweight,” said Arum in wanting Pulev to face Whyte.

“The first goal is to unify the titles and then get rid of the guys that are the mandatories. The mandatories out there are Dillian Whyte, and the WBO has Oleksandr Usyk, who is not only a great fighter but a great person.

“Everybody has got to cooperate with each other and find a situation to get these fights done. I understand Dillian Whyte’s frustration, and I believe we can deal with that if we’re reasonable and sensible,” said Arum.

What Arum isn’t saying is that Whyte won’t get his shot until Arum, the dust settles for the fight for the undisputed championship in 2021. But Whyte is saying that he wants his mandated title shot against WBC champion Fury by February. It doesn’t matter if Wilder beats Fury.

Whyte will still want his title shot by February 2021, and he’s not going to stand there and let the Fury-Wilder winner face the winner of the Joshua vs. Pulev fight.

Arum may be forced to edition the World Boxing Council to make Fury a Franchise champion so that he can circumvent his mandatory obligations. It’ll be ugly if the WBC makes Fury the new Franchise champion. Still, it’ll accomplish Arum’s goal of letting The Gypsy King battle for the undisputed championship straightaway in 2021 against the Joshua vs. Pulev winner.