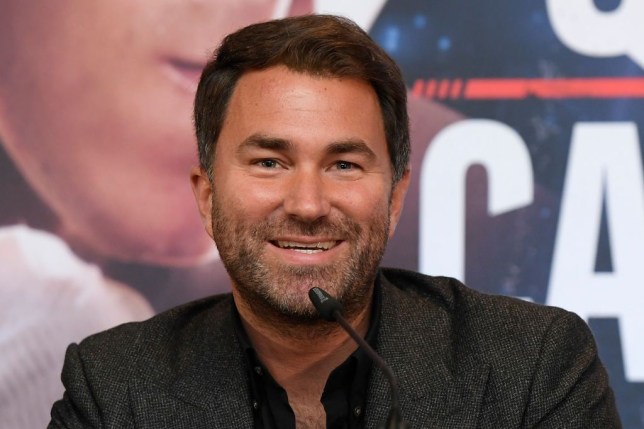 Eddie Hearn is gung ho about putting together a fight between Devin Haney and Adrien Broner for the summer. Broner (33-4-1, 24 KOs) got the ball rolling on Friday in messaging the Matchroom promoter Hearn asking for $20 million to face WBC lightweight champion Haney (24-0, 15 KOs) at 135.

Hearn is intrigued at the idea of matching Haney against Broner, as this is a fight that will increase his young fighter’s popularity, and bring in subscribers to DAZN.

To make things easier on the former 4 division world champion Broner, the 21-year-old Haney says he’ll come up to meet Adrien at a catchweight of 143 lbs. That would make the fight at welterweight, and it would be a weight that the 31-year-old Broner wild have a better shot at making at this point in his 12-year pro career. Broner hasn’t fought in 13 months since losing to Manny Pacquiao in January 2019.

Hearn isn’t taking ‘The Problem’ Broner’s ability to make 135 seriously, and he’s not willing to entertain his request for $20 million for the fight with Haney. However, Hearn still wants to make the Haney vs. Broner fight for the summer.

Hearn talks Broner’s $20 million request for Haney fight
“So basically me and Adrien Broner were going to meet up in Miami last week, and it didn’t happen,” said Hearn to iFL TV. “So, I didn’t realize he was having this beef with Devin [Haney] on social media. He DM’d messaged me, saying, ‘Listen, give me $20 mil, and I’ll make 135 and f— up Devin Haney.’

“So I then sent it to Devin Haney and his dad, and we were laughing. ‘Should I post it LOL?’ And they come back, ‘You gotta post it!’ Oh no, because when he [Broner] put out my private and confidential email, and everyone was, ‘Oh, that’s really bad doing that, and blah-blah-blah.’

“I thought, ‘One, he’s [Broner] already done it to me, so f— it,’ and two, I already messaged him and said, ‘I’m going to post it.’ And he was like, ‘Whatever.’ So I was, ‘Alright,’ so I posted it. My job is to get people talking about things. So last night, the greater whole of the boxing community was talking about Devin Haney. And Adrien Broner consistently does this, doesn’t he?

Haney willing to fight Broner at 143 lbs says Hearn
“I mean, he’s gotten beat how many times, and he continues to be one of the biggest draws in the sport,” said Hearn on Adrien. “Listen, July the 7th, they will fight at 143 pounds, and we’re looking at the Bay Area in San Francisco. It’s a great fight for Devin Haney,” said Hearn jokingly. “Don’t rule it out. Devin said he would fight him up to 143 lbs.

“What’s the point? Broner couldn’t even make 140, but he can try and make 140, and we’ll let him fight at 143. Obviously not,” said Hearn about Broner wanting $20 million for the Haney fight. “I don’t know where he pulls these numbers from. If he wants to talk seriously, I like the fight. It’s a great fight night for DAZN,” said Hearn.

143 is a good weight for Broner, as he can probably make that one without too much difficulty. It would be asking too much of Broner to have him stick to his original offer of fighting Haney at 135. Broner hasn’t fought at 135 since 2013, and he would likely look like a skeleton at that weight now.