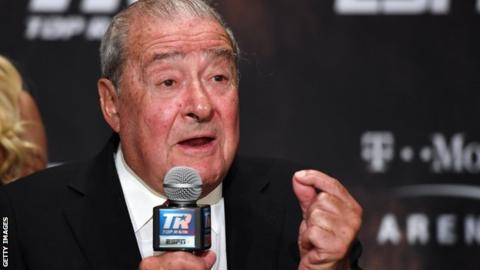 Hearn isn’t blaming it on Wilder and Fury not being big attractions in the U.S. He thinks it’s a tough market that the fight is competing with in the U.S. Besides boxing, there’s NFL football, MMA, baseball, basketball and hockey. There’s a lot of different sports that Wilder and Fury are competing for eyeballs. You’ve got the Super Bowl coming up, and a lot of fans thinking of that.

Arum sounds he’s pretty convinced that the Wilder-Fury 2 fight will hit the 2 million buy mark for their rematch at the MGM Grand in Las Vegas. The reason why people think it might not do well is that lack of huge interest in the fight from fans.

Part of the reason for that can be explained by Fury giving mixed messages. He’s posting on his Instagram while sitting in a hot tub outside in the sun, and he doesn’t look like he’s training at all.

Wilder vs. Fury will exceed 2 million buys – Arum
“I don’t know what’s guaranteed or what’s not guaranteed. But I’m telling you, I really believe we’re going to exceed 2 million [pay-per-view buys],” said Arum to Kevin Iole in predicting Wilder-Fury 2 brings in over 2 million buys. “The interest in this fight is enormous. Newspapers are writing about the fight, and they usually don’t write about fights, and everybody is talking about it.

If this fight doesn’t hit the big numbers that Arum is predicting, he might be second guessing himself for putting all the money into signing Fury. Arum obviously signed Fury thinking that he would build him up into a household name before scheduling the Wilder-Fury 2 rematch. It’s quite possible that Arum underestimated how much work that needs to go into making a fighter into a star in the U.S.

For example, it took knockout artist Gennadiy Golovkin three years of fighting in the U.S before he became a big name. What helped GGG do it so fast was his impressive knockouts, and the fact that he was fighting 2 to 4 times a year. In Fury’s case, he’s only had one year since his fight with Wilder in 2018. Arum is trying to turn Fury into a star too fast, and it’s failed to happen for obvious reasons.

Wilder won’t want third fight after losing to Fury
“This is a massive, massive pay-per-view,” said Arum about the Wilder vs. Fury 2 rematch. “With the combination of ESPN and FOX, and the interest in this fight, and how great the first fight was, we’re going to set heavyweight records for pay-per-view.

“There may not be a third fight, because I think Tyson Fury is going to knock Wilder out, and under are deal, the loser can only ask for a rematch,” said Arum. “I don’t think Wilder is going to get in the ring again with Tyson Fury. He doesn’t want anything to do with him. I look for Wilder NOT opting for the third fight, and Tyson Fury fighting the winner of the fight coming up between Joshua and Pulev.

“There’s the Frenchman Tony Yoka, who won the Olympics, there’s Joe Joyce, who won the silver medal, there’s [Daniel] Dubois, and there are older guys like Big Baby Miller, Pulev, Usyk. I think Usyk is probably the best boxer in the heavyweight division,” said Arum.

It sounds like Arum is counting on Wilder not exercising his rematch clause to force a third fight if he loses to Fury on the 22nd of February. It’s a win-win for Arum if Fury beats Wilder, and then The Bronze Bomber doesn’t force a third fight later this year.

What Arum will do is set up a fight between Fury and IBF/WBA/WBO champion Anthony Joshua, and that fight will make huge money. Hearn is also hoping that Fury beats Wilder, because he wants to set up a fight between Tyson and Joshua THIS year in Saudi Arabia. Arum would likely not say no to that. But for that pipe dream to happy, Fury has to beat Wilder first.

Arum confident Fury will knockout Wilder
“I saw a guy that took Wilder’s best punch, got knocked on his a—, looked like he was dead, and his head hit the canvas, and he gets up,” said Arum on Fury getting dropped by Wilder in the 12th round in their fight in 2018. “Not only does he get up and survives, but he takes the fight to Wilder.

“He’s winning the last minute of the fight after getting knocked on his a—,” said Arum on Fury. I’m thinking, yes, Wilder knocked him down, but Fury knows he can recover, and Fury is going to go for the knockout in this fight. That’s why he switched to a Kronk guy, Sugarhill Steward.

Of all the things Arum is saying in this interview, his prediction of a Fury knockout of Wilder is the least believable. The fight might bring in 2 million buys like Arum says, but Fury isn’t going to knockout Wilder with his lack of power. That’ll be really risky if Fury tries to KO Wilder, because he’ll run into something and end up getting knocked out himself. Arum wants Fury to fight Wilder’s fight, and that’s not the right thing for him to do.