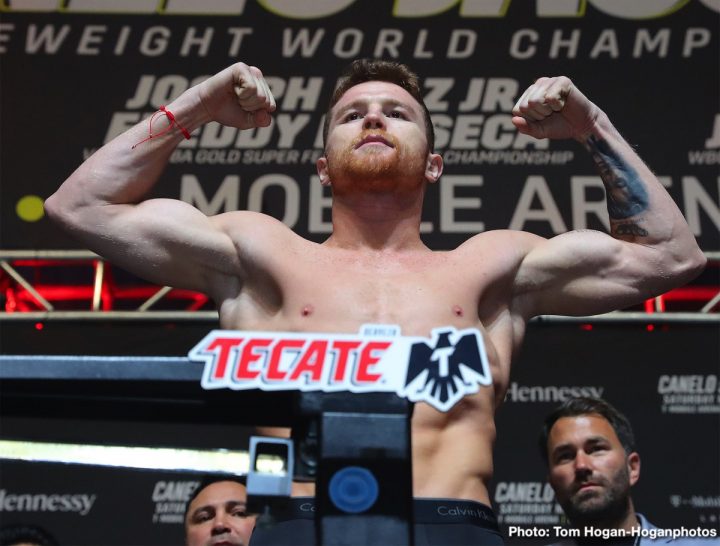 Saul Canelo Avarez is an unhappy camper a day after being stripped of his IBF middleweight title by the International Boxing Federation after his promoters at Golden Boy Promotions were unable to hammer out a deal with his IBF mandatory challenger Sergiy Derevyanchenko on Thursday.

Canelo (52-1-2, 35 KOs) says he’s “Upset” and “ashamed” over it, and he feels that he was “unfairly” stripped of his title by the IBF. Judging by Canelo’s reaction on social media to him being stripped of his IBF title, he wasn’t aware that there was an agreement that his matchmaker had signed.

Canelo’s reaction to the IBF stripping him of his title

“I’m very upset and ashamed with my fans, to be unfairly stripped of my belt by the IBF, but specially when I did not have the knowledge of the agreement that GBP match maker had signed,” said Canelo on Twitter. “For my part I will continue as usual, with discipline and desire to continue triumphing.”

IBF president Daryl Peoples told ESPN that Golden Boy Promotions matchmaker Robert Diaz had agreed that Canelo would vacate his IBF 160 pound title if there wasn’t a deal meal with Derevyanchenko by the deadline on July 29 at 3:00 p.m. ET.

“It is crystal clear from the correspondence that on July 26, 2019, [Golden Boy matchmaker] Robert Diaz, on behalf of Golden Boy Promotions, agreed that Saul ‘Canelo’ Alvarez would relinquish the IBF middleweight championship title, with no further negotiations or purse bid, if there was no completed deal between him and Derevyanchenko by the agreed upon extended deadline of Monday July 29, 2019 at 3 p.m. ET. As of today, August 1, 2019, the IBF has been advised that there is no such deal.”

erevyanchenko (13-1, 10 KOs) and Gennady Golovkin (39-1-1, 35 KOs) are said to be in negotiations to fight for now vacant IBF middleweight title. Those two could be facing each other on October 5 at Madison Square Garden in New York. In the meantime, Canelo, 29, and WBO middleweight champion Demetrius Andrade could be fighting before the end of the year, and that’ll be a thrilling fight. The winner of that match would setup an interesting fight against the winner of the Golovkin vs. Derevvyanchenko fight with three of the four titles on the line.

The only belt that wouldn’t be up for grabs in that fight would be the World Boxing Council middleweight title, which is in the possession of Jermall Charloright now. Canelo has the WBC Franchise title. That’s an honorary belt, and it’s not one that can be fought over.

“Rumors have swirled for weeks that Canelo and GBP are having issues. Robert Diaz, GBP’s matchmaker, has been Canelo’s direct contact. If Alvarez wasn’t aware of the IBF deal Diaz agreed to, that’s an issue,” said @MikeCoppinger.