Live results and round-by-round coverage of Pacquiao vs. Thurman

Live results and round-by-round coverage of Pacquiao vs. Thurman 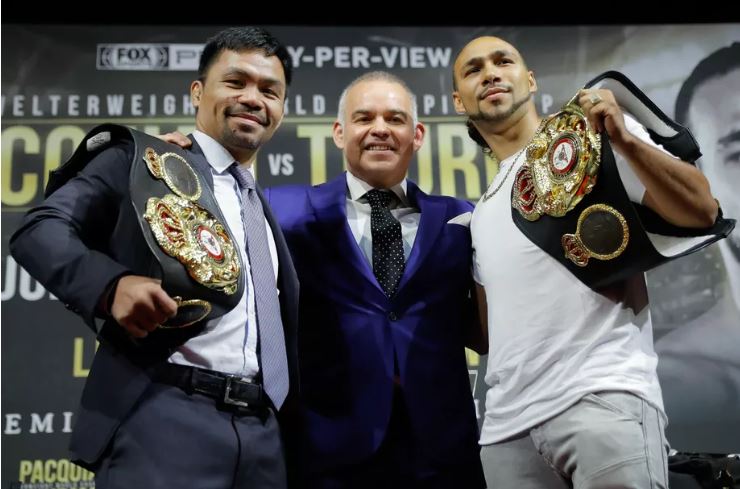 We have a live blog for Saturday’s pay-per-view, featuring Manny Pacquiao and Keith Thurman

Luis Nery def. Juan Carlos Payano via KO (body shot) in Round 9
Round 1: Payano takes the center first, ad he’s pawing his lead hand out there, gauging the range. Payano takes some wild swings, a big left hand landing at the end, but Nery walks through it. Payano gets Nery up against the ropes, and there may have been a clash of heads. Outside right hook slips through Nery’s guard and lands on the chin. Nery avoids the follow-up one-two from Payano. The round comes to an end without much action, especially from Nery.

SB Nation scores the round 10-9 for Payano.

Round 2: Nery comes out a bit more active, winging a right hook, but they tie up and are separated. Hard straight right form Payano lands, but he eats a counter left from Nery. They clinch up, and Payano throws a flurry of punches, but Nery circles away. Body shot from Payano misses. Payano is staying very active and Nery isn’t doing much but follow him around the ring. Payano is keeping Nery off balance. They tie up, and Nery chooses his moment to explode, landing a hook to the body and just missing with two hooks at range. Better round from Nery, but he needs to pick it up.

Round 3: Nery switches up his stance, and paws his right hand out there. He lands left hook near the back of the head of Payano, who was turning away from him. Thurman gets Payano into his range, and he throws several short hooks low, all good shots as Payano ha to briefly turtle up. Nery gets Payano in the corner and tees off, jut missing with a major overhand. Counter left from Payano lands, and the round comes to an end. This is a hard one to score, as Payano still effectively controlled the action and had some good shots, but Nery definitely landed some of the harder blows of the bout.

Round 4: Nery throws a big flurry to start, connecting on three straight hooks to the body that did some damage. Now he’s got Payano backing up, chasing him around the ring. Payano changes levels and tries to throw in a massive hook, but Nery slips it. Short jab from Payano lands. Counter overhand right from Payano also lands. Payano takes a spill, but it’s not a knockdown. They resume and Nery flies forward with a winging left power punch, but Payano ducks it.

Round 5: They get into a wild slugfest early in the fifth, both swinging big hooks, but neither really landing anything hard. Both almost have their heads knocked off, but miraculously, both are unscathed from the exchange. Counter right from Payano lands. Nery is still having some trouble tracking Payano, who is moving well, but whenever the gap is closed, Nery lands some good shots. Right straight from Payano lands, and a hard hook to the head from Nery after the clinch. Messy, messy exchanges in this round, so much so that it’s really hard to pick a winner.

Round 6: Payano is again controlling the action, coming in with big pressure, big left hooks that Nery is mostly avoiding, but he’s unable to set anything up himself. Nery is looking for the big power shot, but Payano is staying out of danger. Big right hand over the top from Payano lands, and it was probably the best shot of the fight.

Round 7: Nery connects with a good left as Payano came in to start the round. Payano comes forward again, but Nery finally finds his accuracy. He slams a right hook right into the chin of Payano, who staggers and backs himself up, clearly rocked. Nery lands another shot, a big right hook, and Payano shoves Nery into the ropes out of frustration. Nery seems to have found his range. Big left jab from Nery, and a right uppercut. He gets Payano against the ropes and rips a huge hook to the body when Payano circles away.

Round 8: Payano comes forward and shoves Nery to the ropes, landing a hard shot to the body on the way, but Nery slips the short flurry that followed. Payano avoids the over-the-top hook from Nery, but a massive straight left from Nery stuns Payano, right on the button. Payano recovers, but eats a right uppercut from Nery. Payano sets and throws several big hooks out there, but Nery avoids big danger. Payano landed more shots, but Nery landed the much, much harder ones.

Round 9: Left over the top from Nery pushes Payano back. It looks like Payano is slowing down a bit. Nery with the short uppercut, Payano with two short uppercuts of his own, and DOWN goes Payano! A huge, heavy body shot from Nery sends Payano to his knees, and he can’t respond to the count from the ref. It was a liver punch, too. Wow!

We’re here for our live coverage of the pay-per-view boxing card on Saturday, featuring a main event between Manny Pacquiao and Keith Thurman for the WBA (super) welterweight title. We’ll have round-by-round coverage of the three main card bouts, including scoring. The current round and bout will live at the top of this article, while previous rounds and bouts will be listed below.

In his last bout, Manny Pacquiao showed the boxing world that, while maybe not at his peak, he can still absolutely destroy opponents. His hand speed hasn’t dropped nearly as much as many assumed, but his next bout, against Keith Thurman, will be one of the greatest challenges of his illustrious career.

There’s a difference between this and his previous few bouts. He impressed us when he knocked out Lucas Matthysse, and he handled Adrian Broner without issue. Many believed he won against Jeff Horn. But none of those guys were absolute top contenders with ridiculous knockout potential. This is possibly the most dangerous bout Pacquiao could have taken in 2019.

Pacquiao, 40, has a 61-7-2 record as a professional, with wins in his last two bouts. He has 39 wins via knockout and 22 by decision. He’s an eight-division world champion who currently holds the WBA (Regular) welterweight strap. He’s trying to take Thurman’s WBA (Super) welterweight title, but if he beats him, he’ll be the first.

Thurman, 30, is 29-0 with 22 victories via knockout. His résumé includes wins over Josessito López, Danny Garcia, Shawn Porter, Robert Guerrero and plenty of others. He’s beaten nobody of Pacquiao’s caliber, but then again, Pacquiao isn’t exactly in his prime.

He’ll still be tough to beat, especially if Thurman continues to show signs of rust after an extended layoff between his previous two bouts. He won a majority decision over López his last time out, and was rocked once in the seventh round. If he gets sloppy against Pacquiao, he’ll find himself rocked, and then some.

And that’s why this fight is such a good one — it’s hard to predict. It should be easy to see any number of victories for both fighters, and you could say that both are taking a risk by accepting the fight to begin with.

The three-fight pay-per-view card will be introduced by a three-fight preliminary card on FOX, beginning at 7 p.m. ET. The highlight of that card is an IBF Super-middleweight title bout between Caleb Plant and Mike Lee. The pay-per-view main card begins at 9 p.m. and also features two other welterweight contests.

The opener will pit Sergey Lipinets against John Molina Jr. Lipinets is 15-1 with 11 knockouts. His lone loss came to Mikey Garcia, though he wasn’t that far out of that bout. His most recent win was over Lamont Peterson, where he looked much better than he did against Garcia and Erick Bone. Molina is 30-8 with 24 knockouts, perfectly capable of beating somebody like Lipinets, but who Lipinets needs to beat to stay in contention.

The co-feature will pit Yordenis Ugás against Omar Figueroa Jr. Ugás is 23-4 with 11 knockouts, while Figueroa remains unbeaten at 28-0-1 with 19 knockouts. Ugás is one of the more interesting journeyman boxers out there, as he was initially a hyped prospect who suffered a big loss to Johnny Garcia in 2012, but then went on to be an effective gatekeeper who actually kept the gates — ending the unbeaten streaks of Jamal James and Bryant Perrella.

Now Figueroa is in his sightlines. Figueroa is another fighter who tends to exceed expectations, all the while being someone who has struggled with his conditioning and weight over the years. Either way, it’s an interesting stylistic matchup and is more interesting than even the main event on paper.

Below is all you need to know to watch on Saturday. We’ll have live coverage.