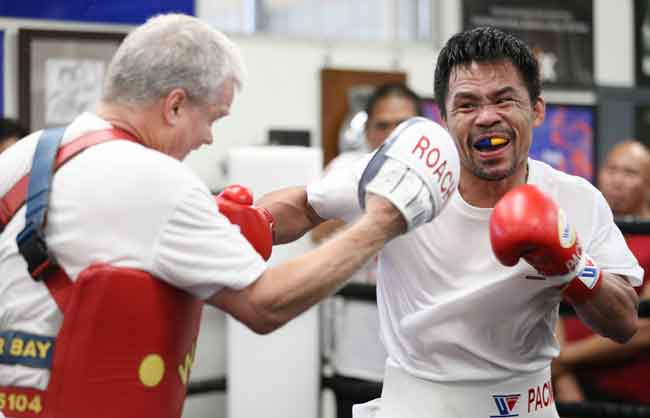 BY EDDIE G. ALINEA
LOS ANGELES: With his physical toughness believed to have have been re-acquired, WBA regular belt owner Manny Pacquiao on Monday enters the tapering off period of his build up for his coming fight two weeks from now.

“This is the time of maintaining what gains we have achieved in Manny’s one and a-half-month stay in the camp,” training consultant Freddie Roach told The Manila Times at the start the final week before the team proceeds to Las Vegas.

“But most importantly, strength and conditioning coach Justin Fortune, for his part, butted in, “the week gives us the opportunity to also provide Manny with additional mental toughness against an opponent who’s been bad-mouthing him throughout our preparations.”

“Manny’s already strong physically as himself pronounced him to be as early as two weeks ago. He’s mentally tough, too,” Fortune asserted.

“But we in the training team believe he’s been affected by the trash-talking he’s been hearing and we thought, perhaps, we need to erase them from his mind,” the two best training minds in the business chorused.

The duo were referring also to the other members of the training team — chief trainer Buboy Fernandez, Nonoy Neri, Marvin Somodio and Roger “Haplas” Fernandez.

“Rest assured, though, that we’re ready for that in the same manner that we’re ready to provide him with tactics and strategies he needs in the process of trying to preserve all the important things we’ve accomplished,” Roach said.

Pacquiao and his team leaves for Nevada’s sin city on July 15 to honor his date with American Keith “One Time” Thurman to unify the WBA 147-pound division.

Pacquiao and Thurman, acknowledged as the “super” champion, collide on July 20 at the MGM Grand Arena to decide who between them will be recognized as the sole titlist of the welterweight class.

Like in the past weeks since landing in this world entertainment capital, the soon-to-be 41-year old scaled the hilly Griffith Park inside the Santa Monica mountains on Monday, one of the things he enjoys while training here for a fight.

“He loves running on the mountains and although we feel he no longer needs it, we acquiesced to the things he wants to do, but to a very minimal load, for psychological purposes, ” Fortune said.

In the afternoon of the same day, the Philippines’ fighting senator was seen at Roach’s Wild Card Gym along Vine St. in Hollywood working the mitts for four rounds with Roach, a regimen that will be repeated on Wednesday, Friday and on the day they depart for Las Vegas.

After his turn at the mitts, Pacquiao watched eldest son Jimwell, 18, who is said to be following in his dad’s footsteps as a fighter, do punch the pads with Somodio, which according to Fortune made the father happier.

On Tuesday, Manny will be sparring for eight rounds each with American ranked welterweights Jessie Roman and AB Lopez. On Thursday, sparring will be for six rounds and Saturday and Monday four.