Details
Taken from The Manila Times 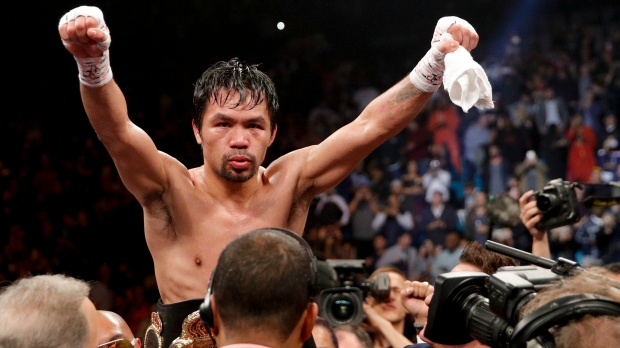 BY EDDIE G. ALINEA  (Part 2 of a series)
LOS ANGELES: After his eighth round demolition of American legend Oscar DeLa Hoya in his first fight as a welterweight, the then Filipino soon-to-be eight-division champion Manny Pacquiao was paired against Miguel Cotto next, whom he technically knocked out in 12 rounds to wrest the WBO 147-pound crown.

The Philippines’ pride, thus, emerged as the first man in boxing’s history to be crowned seven-division world champion. Pacquiao dominated the matchup, knocking Cotto down in round 3 and round 4 before the referee stopped the proceedings at 0:55 left of round 12.

With the win, which then brought his record to 50-win, 3-loss and draw, Pacquiao also brought home the special WBC Diamond Championship belt, created as an honorary championship awarded to the winner of a historic fight between two high-profile fighters.

After the fight, Bob Arum of Top Rank, Pacquiao’s promoter at that time, declared: “Pacquiao is the greatest boxer I’ve ever seen, and I’ve seen them all, including Ali, Hagler, Sugar Ray Leonard.”

Cotto, for his part, said in a post-fight interview: “Miguel Cotto comes to boxing to fight the biggest names, and Manny is one of the best boxers we have of all time.”

That win signaled, too, what was the become a long five-year negotiations for the Filipino sensation and his counterpart, undefeated American Floyd Mayweather Jr. to meet in what was billed as the ‘Fight of the Century.’

While talks were going on in what seemed unending process, the champ defended his newly-acquired jewel twice against former IBF welterweight titleholder Joshua Clottey and ex-lightweight, welterweight and super welterweight world belt-owner Shane Mosley, both via unanimous decisions.

The latter coming off an impressive triumph over Antonio Margarito from whom he took his unprecedented eight-division title conquest – the super welterweight or junior-middleweight as discussed in the first part of this series.