Crolla expects Luke Campbell to have success against Vasiliy Lomachenko

Crolla expects Luke Campbell to have success against Vasiliy Lomachenko 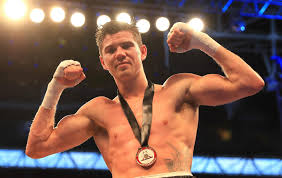 Former WBA lightweight champion Anthony Crolla believes that Luke Campbell will find better success against WBA/WBO 135 pound champion Vasiliy Lomachenko (13-1, 10 KOs) than he did last April in getting crushed in four rounds. This is a match-up of two Olympic gold medalists, and both the same age at 31.

Lomachenko-Campbell fighting for vacant WBC lightweight title
Campbell (20-2, 16 KOs) and Lomachenko (13-1, 10 KOs) will be fighting it out for the vacant WBC lightweight title on August 31 in London, England. The fight will be announced possibly next week by Matchroom Boxing promoter Eddie Hearn. Lomachenko is considered as a huge favorite to defeat Campbell in the eyes of most boxing fans, but we’ll soon see if that’s the case.

Campbell is the mandatory for the vacant WBC lightweight belt. Lomachenko was picked out as his opponent after his promoters at Top Rank made a request to the WBC to have the Ukrainian challenge for the vacant 135 lb title. So instead of Campbell facing Devin Haney in a fight that would likely lose, he’s facing Lomachenko with the same poor shot at winning.

Crolla: Campbell better suited to fight Lomachenko
“I think Luke is more suited stylistically to give Lomachenko a better fight,” said Crolla to skysports.com. “He’ll [Campbell] be a lot bigger than Lomachenko but it’s just how long you can keep Lomachenko off and how he closes the distance, super, super clever.”
Crolla (34-7-3, 13 KOs) is probably correct about Campbell being better suited to give Lomachenko more of a test than he did. For starters, Campbell, 5’9″, is taller than the 5’8 1/2″ Crolla, and has a four inch reach advantage. Against Lomachenko, 5’7″, Campbell will be enjoying a two inch height and a six inch reach advantage. That’s significant. Campbell punches harder than Lomachenko, fights better on the outside, and he’s southpaw.

Crolla is a decent talent, but he’s far from great. Before Crolla lost to Lomachenko, he’d been beaten twice by Jorge Linares, Gary Sykes [x 2], Derry Mathews, and Youssef Al Hamidi. Crolla also has three draws on his record in fights that he arguably should have lost against Mathews, Darleys Perez and Gamaliel Diaz. The controversial scoring for those three fights saved Crolla from an additional set of losses that he arguably should have. It’s not a big deal that Lomachenko beat Crolla, in other words.

Crolla expects Lomachenko vs. Campbell fight to be a chess match early on
“I believe he will be looking to keep it long, use those advantages,” said Crolla. “To me, it just depends on how aggressive Loma comes out. If he comes out so aggressive, he could get to Luke a lot earlier but I think he will look to box and I think for four rounds it will be pretty cagey.”
It would be a major upset for Campbell to beat Lomachenko, because he’s not shown the ability to win a fight like this. For example, Campbell lost to Jorge Linares by a 12 round unanimous decision in 2017. Lomachenko knocked out Linares in the 10th round in May 2018. As the saying goes, ‘styles make fights,’ but Campbell was beaten in a way by Linares that suggests that Loma will have little problems doing the job as well. It goes without saying that Campbell will probably do a better job against Lomachenko than Crolla did, but how much better? Campbell suffered a 12 round decision loss to Yvan Mendyin 2015, and he looked chinny in that fight. That’s another guy that Lomachenko wouldn’t have any problems beating.

Crolla saw zero weakness in Lomachenko
Anthony saw no flaws flaws in Lomachenko’s game. When Crolla did land a significant punch on the chin of Lomachenko, it led to him turning up his offense a notch to make him pay.

Will Campbell gain anything in giving Lomachenko a tough test, but still end up losing? The object of the fight is to win, and if Campbell can’t do that, then he’s not going to come out ahead in losing.

One would be hard-pressed to see Campbell beating any of above mentioned guys. The good news is Teofimo will be moving up to light welterweight in 2020. What’s bad the rest of those guys will still be at 135, and potentially blocking Campbell’s path to a world title. At 31, Campbell isn’t getting younger, and he’s going to have to figure something out for him to have a chance of winning a world title.

Campbell lasting 12 rounds against Lomachenko may be a moral victory
Since winning the fight might not be possible for Campbell, he can at least try an go the 12 round distance without quitting . That would be a moral victory for Campbell in a sense, because Lomachenko has forced a number of talented fighters to quit in fights against him. Loma has a way of embarrassing his opponents in dominating them to the point where they just give up. Jose Pedraza went the full distance with Lomachenko last year, but he fought Loma after he returned from a shoulder injury. Lomachenko may not have been 100 percent for that fight.

Campbell has tasted the canvas before in fights against Mendy and Argenis Mendez, but he’s never been close to being knocked out by anybody. Lomachenko’s knockout win over Crolla last April wasn’t a true indication of the type of fighter he is. Loma prefers to box his opponents , and hit them with light punches until they quit. With the Crolla fight, Lomachenko was stung by the criticism from boxing fans and the media over his lackluster performance against Pedraza. Lomachenko came out with a chip on his shoulders, and went after Crolla to prove a point to the critics.