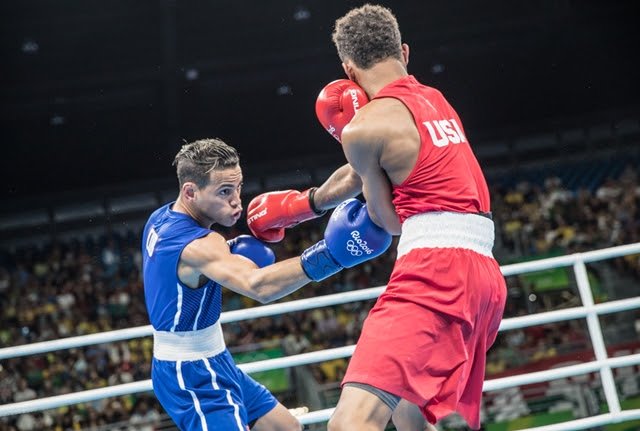 Top Rank is reportedly finalizing a multi-fight deal with the talented two-time Cuban Olympic gold medalist Robeisy Ramírez for him to join them. The 25-year-old Ramirez defected from his native Cuba in 2018, but he still hasn’t fought at pro.

Robeisy Ramirez is a future superstar
This is a HUGE addition to Top Rank’s stable. Ramirez is a can’t miss superstar, who not only has the type of talent that we’ve seen with Vasiliy Lomachenko to immediately capture a world title, but to become a major star. The best thing of all is Ramirez is just 25-years-old, and has lots of time to accomplish big things, as long Top Rank doesn’t keep him in the slow lane like they’re doing with Shakur Stevenson and Michael Conlan.

Ramirez defeated American Shakur Stevenson by a 2-1 score in the final of the 2016 Olympics. Stevenson, 21, is now signed with Top Rank, as is Michael Conlan of Ireland, who Ramirez whipped by a 20-10 score in the 2012 Olympics. Ramirez really turned it on against Stevenson in the 2016 Olympics. Although the fight was scored closely, Ramirez had too much fire power for the younger Stevenson to handle in the fight. Ramirez showed that he had another gear. When he switched gears on Stevenson, he left him behind.

Top Rank signing Robeisy Ramírez is a major addition to their stable. Unlike Michael Conlan and Shakur Stevenson, Ramirez is ready to win a world right now. He’s not someone that needs years of polish to try and win a title in the pros. He’s capable of doing it now.

Coppinger said this on his Twitter about Robeisy Ramirez signing with Top Rank:

“SOURCES: Robeisi Ramirez, a two-time Olympic gold medalist and Top Rank are in process of finalizing a multi-fight deal. The 25-year-old has yet to fight in pros after defecting from Cuba. Ramirez beat Shakur Stevenson in 2016 gold medal match. Another blue-chip prospect for TR [Top Rank].”

Robeisy Ramirez needs to be careful with his diet
Hopefully, Ramirez’s weight doesn’t get out of control once he starts eating U.S food. Who can forget what happened to 2004 Cuban Olympic heavyweight gold medalist Odlanier Solis after he defected to the U.S. Solis’ weight went from 200 pounds to 250+ lbs. almost immediately, and he was never able to get his weight back down to what it was when he was an outstanding Cuban amateur. Despite having loads of talent, Solis’ weight was too much of a problem for him to thrive as a pro. If Solis could have stayed at the 200 pounds that he weighed in Cuban, he would have likely had a great career. Robeisy Ramírez needs to be disciplined with his diet for him to be able to stay in the lighter weights. If he balloons up to 160+, then forget it. He won’t pan out.

Ramirez will need to work on his power game for him to do well in the pros. There are a lot of guys that can punch at featherweight and bantamweight. If Ramirez ends up fighting the likes of Naoya Inoue, Luis Nery and Nonito Donaire, he’ll need punching power to compete with those type of guys if he’s going to fight at bantamweight. Ramirez’s lack of punching power might be a problem for him if he faces the bigger punchers in whatever weight class he chooses to fight at. Conlan and Stevenson are both at featherweight now. If Ramirez is going to fight in the 126-pound weight class as well, then he’ll need to be able to compete with powerful punchers like Leo Santa Cruz, Gary Russell Jr., Eduardo Ramirez and Oscar Valdez. Those guys hit hard, and have a lot of talent. Ramirez will need to find some power to mix it those type of fighters if he’s going to compete at featherweight.