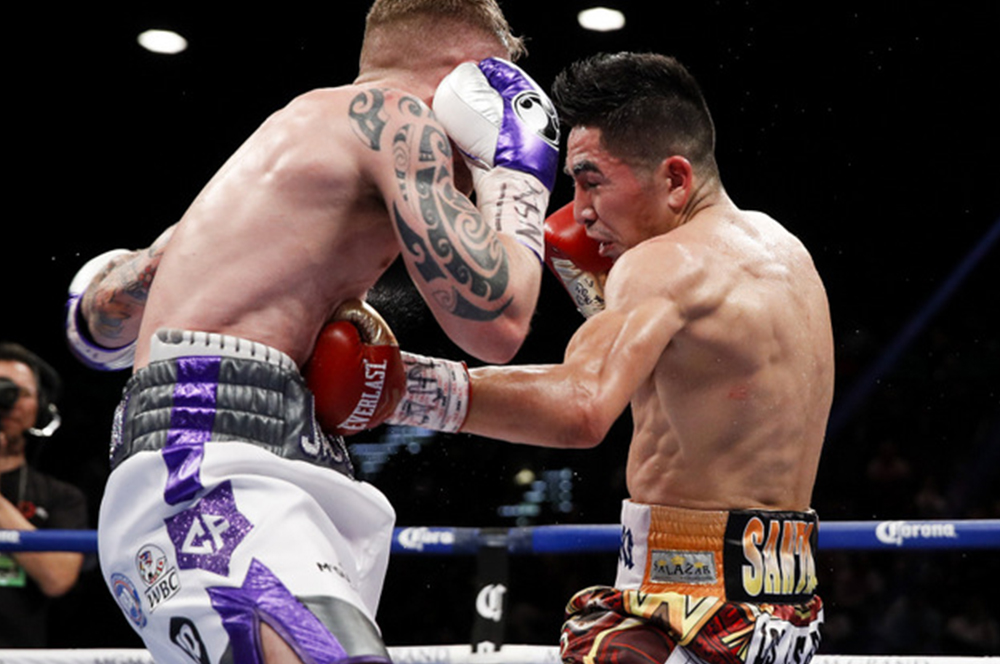 Frampton, 30, is obviously still smarting from his 12 round majority decision defeat to Santa Cruz earlier this year on January 28 at the MGM Grand in Las Vegas, Nevada. Frampton got out-boxed by Santa Cruz, who surprised him by choosing to fight on the outside rather than taking the fight to the inside to take advantage of his superior inside skills.

Frampton (23-1, 14 KOs) was hoping to get Santa Cruz to come to the UK to fight him in Belfast, but that’s not happening. Santa Cruz already fought Frampton in front of a large pro-Frampton crowd in New York last year on July 30, and he wasn’t going to put himself in that position again. Santa Cruz fought well enough to deserve the win over Frampton, but the judges scored it 116-112, 117-111 and 114-114. Boxing News 24 scored the fight 7 rounds to 5 for Santa Cruz.

Frampton will be taking on a very good fighter in 24-year-old Gutierrez (35-1-1, 25 KOs) in a fight that will be a real test to see how well he can deal with a good Mexican boxer/puncher. Frampton had problems in the past against Mexican Alejandro Gonzalez Jr. in getting knocked down twice by him in the process of beating him by a 12 round unanimous decision on July 18, 2015.

Gutierrez ranked #8 WBC, #12 WBA, #14 IBF, will be looking to duplicate the efforts from Santa Cruz. You’re not going to see Gutierrez trying to reinvent the wheel against #1 WBC, #3 IBF, #3 WBA, because that would be a dumb move by him. All Gutierrez has to do is box, fight smart, and not get caught in a war. It’s not that Gutierrez can’t potentially beat Frampton in a 12 round war. He stands a better chance of beating Frampton if he boxes him and uses his ring smarts instead of going primitive against him.

Frampton is now thinking about challenging IBF featherweight champion Lee Selby (25-1, 9 KOs) for his title. Frampton was at ringside to scout Selby in his last fight against Jonathan Victor Barros on July 15 at Wembley Arena in London, England. Selby won the fight by a 12 round unanimous decision, but he looked far from unbeatable in that fight. Frampton must feel confident that he’ll be able to pressure him and pound him out. Selby wants the fight against Frampton. It’s his best bet for a big payday in the short term.

“All being well this Saturday, I expect to be fighting again before the end of the year – and a world title fight with Selby would be perfect,” said Frampton to skysports.com. “The Selby fight would be great but I just have to focus on Gutierrez. He’s a young, hungry fighter who knows he has the chance to smash his way into the world title picture. He’s relentless and I have to be on my game – and I will be.”

You can’t rule out a victory for Gutierrez over Frampton. He’s young enough and powerful enough to defeat Frampton, who has a lot of mileage on him from his 2 fights with Santa Cruz and his fight with Scott Quigg. Frampton took a lot of heavy shots in those 3 fights, and I don’t think the shots did him any good. The one thing that could ultimately keep Gutierrez from pulling off an upset and beating Frampton isn’t based on his talent or boxing skills.

I just don’t see it happening. What Gutierrez has going for him though is he’s a pretty good puncher, he has high energy and he’s young at 24. The wear and tear of 7 years in the professional ranks hasn’t started to show on Gutierrez like they have on Frampton, even though he’s been a pro for the same amount of years. Gutierrez go an earlier start to his pro career than Frampton, and he hasn’t had as many tough fights in comparison.

These are Gutierrez’s best opponents of his career:

Those are fair opponents, but not the type that wear you down with their big shots. By the way, Gutierrez lost to Mijares by a 12 round majority decision on June 4 last year in a fight for the vacant WBC Silver Featherweight title. Mijares won by the scores 116-112, 114-113 and 114-114. You can make a strong argument that Gutierrez was robbed in that fight, as he did enough in my opinion to deserve the victory. But in this case, Gutierrez was fighting a well-known former world champion in 35-year-old Mijares.

Given the popularity of Mijares in Mexico, it’s not surprising that he was given the nod by the judges. In contrast, Gutierrez is a young upstart, and not nearly as well known to the casual boxing fans. Technically, Gutierrez lost the fight to Mijares, but you can still consider him unbeaten in my view because he deserved a win in that fight or at the very least a draw.

“I’m not looking past Gutierrez in any shape or form but it’s natural for people to look at the two of us and want to see the fight happen – in the same way that they wanted to see me fight Scott Quigg at super-bantamweight,” Frampton said in his Sunday Life column.

It’s interesting that Frampton keeps yakking about wanting to fight Selby. He needs to forget about fighting Selby and focus on the task at hand. Selby isn’t going anywhere. That fight is there for Frampton whether he beats Gutierrez or not on Saturday. What I don’t understand is why Frampton didn’t take the fight with Selby a long time ago.

It’s not as if Selby just now become the IBF World featherweight champion. He’s been the IBF belt holder since 2015. The fight has been waiting for Frampton for 2 years now. He should have pulled the trigger on the fight a long time ago because Selby hasn’t increased his popularity unfortunately due to him milking his International Boxing Federation title by taking easy fights instead of facing the dangerous guys like Santa Cruz, Oscar Valdez, Gary Russell Jr., Vasyl Lomachenko, Scott Quigg or Joseph Diaz Jr. Of course, if Selby had fought any of those guys, he likely would have been trounced in a one-sided loss. Unlike Selby, those guys have punching power, and they don’t mess around. Selby fighting one of them would be pretty much a ceremonial handing over his IBF title to one of those guys. Selby hasn’t been taking chances in defending his IBF strap. He’s been facing nothing but beatable guys in Fernando Montiel, Eric Hunter, Andoni Gagio and Jonathan Victor Barros. Those were all weak opposition in comparison to the guys that I listed above. If you switch out those names with the likes of Lomachenko, Russell Jr, Quigg, Diaz Jr. and Valdez, Selby would no longer be the IBF champion. He would have lost his strap in his first defense. Selby’s promoter is Eddie Hearn of Matchroom Sport. It’s unclear if Hearn hand-picked Selby’s opponents or if this was done by his management. Whatever the case, Selby has not been fighting the dangerous guys. To make a long story short, Frampton should have taken the fight with Selby already and then he could have sat on his IBF strap like he’s been doing.

Frampton will wind up grinding out a hard fought 12 round unanimous decision over Gutierrez. I see the scores being out of whack from the actual fight. I think the judges will have Frampton winning a wide decision in a fight that is a lot closer than the scores. Gutierrez is going to make Frampton feel his age in this fight.