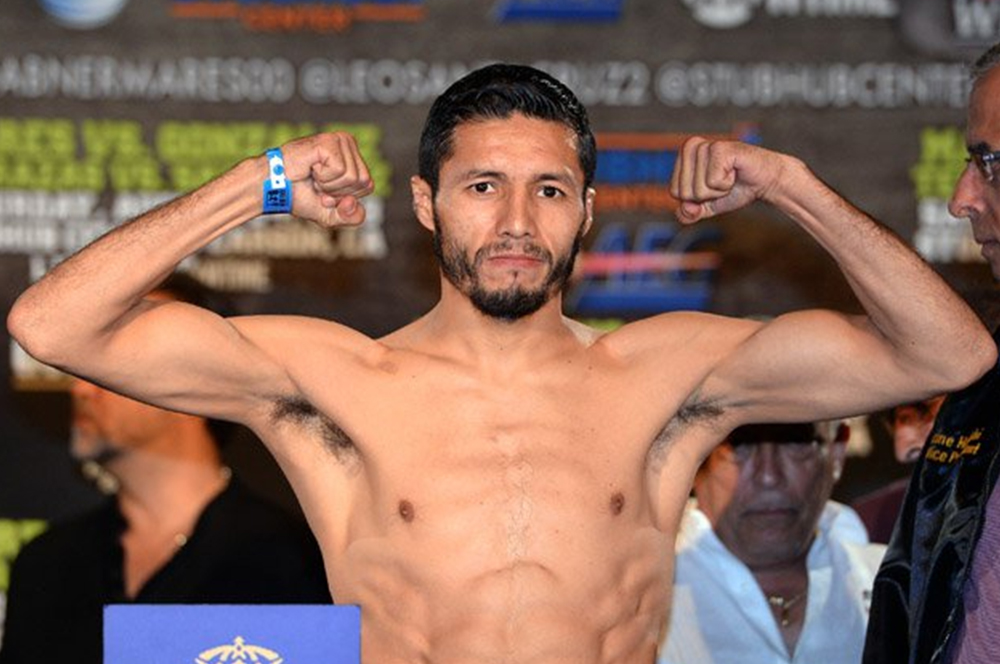 Former two division world champion Jhonny Gonzalez (64-10, 54 KOs) made quick work of little known Jessie Cris Rosales (21-1-1, 8 KOs) in stopping him in the 2nd round of a scheduled 12 round fight on Saturday night at the Lienzo Charro in Hildago Del Parral, in Chihuahua, Mexico.

Gonzalez, 35, knocked the 25-year-old Filipino Rosales down twice in the 2nd round with big left hooks. The fight was stopped after the second knockdown in which Gonzalez his Rosales with a left to the midsection. The shot sent Rosales down on his back where he laid for a considerable amount of time on the canvas.

The fight was stopped immediately by the referee after seeing how hurt Rosales was. With the win, Gonzalez retains his WBC Latino super featherweight title. It was the 6th consecutive win for Gonzalez since losing to Jonathan Oquendo by a 10-round majority decision on September 12, 2015. That was the last time that Gonzalez fought a good opponent.

The first knockdown of round 2 by Gonzalez came from a left hook to the head. The shot sent Rosales down on his backside on the canvas. Gonzalez took his time after Rosales got back up. He didn’t look like he wanted to finish Rosales immediately. Indeed, it was such a mismatch that Gonzalez could have chosen anytime in the fight to press the issue, and he likely would have knocked him out.

In round 1, the quicker Rosales was able to land clean right hands to the head of Gonzalez repeatedly in the round. Gonzalez was too slow to block them and the shots landed flush. It was fortunate for Gonzalez that Rosales wasn’t a big puncher, because he would have been in trouble if he had some power. Gonzalez used his jab frequently to hit Rosales to the head and body. It wasn’t a powerful jab from Gonzalez. He would push it out weakly, barely connecting to the head and body of Rosales. It was the same slow jab from Gonzalez that got him in trouble in his fight with Gary Russell Jr., who frequently countered Gonzalez with hard right hands. Gonzalez hasn’t learned how to throw his jab with speed and power. He’s still throwing limp jabs after 18 years as a pro.

Gonzalez was a lot more aggressive in round 2, hitting Rosales with a hard left to the body at the start of the round. Rosales took the shot, but he looked like it had hurt him to some extent. Moments later, Gonzalez came back with huge left to the head that bowled Rosales over into the canvas. That was a nice shot that Rosales was not expecting. Gonzalez changed up the power on the shot by loading up on it. He’d been mostly throwing punches with moderate power up to that point in the fight. When Gonzalez suddenly increased the power on his left, Rosales was not ready for the added power. Like I said earlier, Gonzalez could have finished Rosales immediately after he got back up, but he chose to take his time and set him up for the final big left hand to the body that knocked him out.

All in all, it was an okay performance from Gonzalez. He showed that he could beat an obscure prospect with no punching power. Do I think Gonzalez could have beaten the top super featherweights in the division with the way he fought? No, I don’t think Gonzalez would have been able to hold up against the likes of the best at 130. Had Gonzalez been facing these guys, he’d have been in trouble: Takashi Miura, Miguel Berchelt, Jesus Cuellar, Francisco Vargas, Orlando Salido, Bryan Vazquez, Takashi Uchiyama, Gervonta Davis, Vasyl Lomachenko and Jezreel Corrales. Gonzalez is a decent fighter at 35, but he’s not the guy that he used to be, and he doesn’t belong at super featherweight.

There are too many talented fighters with a lot of speed, power and boxing ability that would likely be too much for the aging Gonzalez at super featherweight. I’m not sure what Gonzalez’s end game is at this stage in his career. Is he just looking for a final payday against WBC super featherweight champion Berchelt before retiring? If so, he’ll likely get his title shot sooner or later. The WBC has Gonzalez ranked high enough to where he’ll eventually get a crack at Berchelt’s title, but it’s going to be a bad mismatch. Gonzalez does not have the tools to beat a guy like Berchelt.

Gonzalez has never been a guy noted for his hand speed, but he appears to have slowed in the last couple of years. His reflexes were not good. With the way that Rosales was able to connect with his right hand, it was worrisome. Had this been a top super middleweight like Miguel Berchelt, Orlando Salido or Vasyl Lomachenko, Gonzalez would have been in trouble.

Gonzalez is ranked #5 by the WBC. He should eventually get a title shot against WBC champion Berchelt. I don’t like Gonzalez’s chances of winning that fight or even being competitive. The 25-year-old Berchelt is too young, too fast and too skilled for Gonzalez. Berchelt is also has a far better work rate. Gonzalez fights a lot like boxing great Alexis Arguello used to fight by throwing rare power shots, and mostly just jabbing. Gonzalez would need to speed up the pace of his fighting style, and he would also need to increase his hand speed to be able to compete with Berchelt ir any of the top super featherweights in the division. I wouldn’t favor Gonzalez to beat Takashi Miura at this point. I think he would be knocked out by the Japanese fighter, who recently lost to Berchelt by a lopsided 12 round unanimous decision.

Gonzalez pulled off a huge upset in knocking out WBC featherweight champion Abner Mares by a shocking 1st round knockout on August 24, 2013. Gonzalez knocked Mares down twice in winning the fight. What was disappointing is how Gonzalez did so little as the WBC champion, defending the title successfully only twice in beating little known fringe contender Clive Atwell and past his prime Jorge Arce. That was the final fight of Arce’s boxing career on October 4, 2014. In Gonzalez’s next title defense of his WBC belt, he was obliterated by Gary Russell Jr. in a 4th round knockout on March 28, 2014. Gonzalez was knocked down 3 times in the fight by Russell Jr. in getting dropped in the 3rd and two more times in the 4th round before the fight was finally halted. Since that fight, Gonzalez has fought largely weak opposition. The only really good fighter that Gonzalez has fought during the last 3 years is Jonathan Ouendo, who beat him by a one-sided 10 round decision.

Gonzalez would be better off moving back down in weight to super bantamweight. He doesn’t have the youth, speed or the talent to beat the best fighters at featherweight in this writer’s opinion. I think he would be better off going down to 122 and trying to go after IBF champ Yukinori Oguni or WBC champion Rey Vargas. I don’t see Gonzalez having any chance of beating WBO champion Jessie Magdaleno or WBA champion Guillermo Rigondeaux. Those guys are too good.

Featherweight would be a bad weight class for Gonzalez, as he would need to try and defeat Russell Jr., Leo Santa Cruz, Lee Selby or Oscar Valdez. Gonzalez would not do well against any of them. Abner Mares holds the WBA World featherweight title. That would be an option for Gonzalez if he could make the weight. But I wouldn’t give Gonzalez much chance of beating Mares either. Gonzalez has slowed down too much in the last three years of his career in terms of hand speed for him to have a chance of beating Mares. Gonzalez surprised Mares in 2013 in catching him with a big left hook when he made the mistake of slugging with him. Mares would obviously be looking to box Gonzalez’s head off in the rematch instead of punching with him.