Broner angry at media for being underdog

Broner angry at media for being underdog

Broner angry at media for being underdog
Boxing 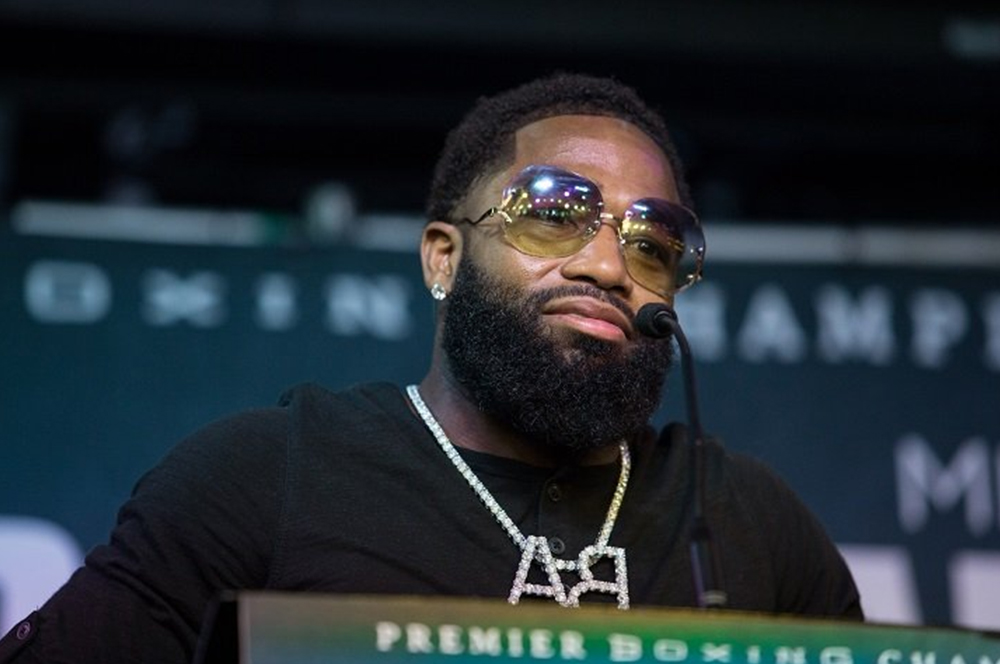 Adrien “The Problem” Broner (33-2, 24 KOs) doesn’t like the idea that the boxing media has made him an underdog for his fight against Mikey Garcia (36-0, 30 KOs) for their fight in less than 2 weeks from now on Showtime Boxing at the Barclays Center in Brooklyn, New York.

Broner is a considerable underdog in the betting circles, and it’s not all that surprising considering his last performance against Adrian Granados last February. Broner got a 10-round split decision win, but he looked like a shadow of his former self from the earlier years of his career. Broner looked and fought in a lackadaisical manner against Granados.

“F— the press. They all against me,” said Broner during Thursday’s media conference call. ”I’m going to f— Mikey up. Nothing personal. I can’t tell the future but I will be victorious.”

Broner looks too thin right night at 144lbs. He looks like he’s taken too much weight off.

You can’t blame the press for not giving Broner much of a chance to beat Garcia. The fighters are going in different directions. Mikey Garcia is fighting at the level where Broner was 6 years ago when he was knocking everyone out, and creating huge interest in his career among the boxing fans. If Broner can reach back to bring back the form he had from 6 years ago, then Mikey Garcia might be in for a real fight on July 29. But with Broner being able to return to the form he had in the past, he’s not going to have much of a chance of beating a talented fighter like the 29-year-old Mikey.

Broner looked very heavy in starting his trainer camp for the Mikey fight. While Broner has done a good job of taking the weight off, there’s a possibility that he could be drained from the process of taking off all the weight he’s put on. Broner is young enough to where it shouldn’t hurt him to trim off a lot of weight, but he’s fought at an elevated level since his win over John Molina Jr. in 2015. That’s a long time ago. Broner might not can find the form that he once had in the past. When you let your foot off on the gas pedal of your career the way that Broner has done since 2015, it’s quite possible that he might not ever be able to become the fighter he once was. Mikey is someone that would have given Broner fits no matter what point in his career that he fought. That’s not to say that Broner wouldn’t have can beat Mikey during the zenith of his boxing career, but it’s still very unlikely that he would have.

The 27-year-old Broner isn’t concerned about the weight penalty for the fight. If either fighter comes in over the 140-pound contract weight for the fight, they’ll need to pay $500,000 per pound. Given that Broner hasn’t made the 140-lb. limit in 2 years since 2015, it’s easy to see how the weight penalty could wind up hurting him big time if he comes in over the limit. Broner says he’s at 144 lbs. right now, but that doesn’t mean anything. Broner could still wind up coming in over the limit if he’s not extra careful about the fight. Broner missed the 140lb weight limit for his fight against Ashley Theophane last year on April 1, 2016. Broner came in one-half pound over the 140lb. weight limit for the Theophane fight, and he subsequently lost his WBA World light welterweight title in the process. Broner won the fight by a 9h round knockout, but he still lost his WBA title on the scales. The weight penalty mainly threatens Broner, because Mikey is moving up in weight from the lightweight division, and he’s had zero problems making weight for his fights. Mikey is a professional, and he’s not going to be sloppy or careless about making weight for an important fight against someone like Broner.

Mikey could be moving back down to the 135-pound division if he’s successful against Broner. That’s a move that some boxing fans don’t quite understand. They feel that Mikey would be better off staying at 140 and looking to fight the winner of the August fight between light welterweight champions Terence Crawford and Julius Indongo. Moving back down to lightweight would be a backwards move by Mikey. The money is at 140 and 147 for Mikey. If he could beat the winner of the Crawford-Indongo fight, and then move up to welterweight to go after the big names in that division, Mikey could make a fortune if he’s successful. At 29, this is the prime of Garcia’s career.

It doesn’t get any better than this. Who knows what happens if Mikey moves back down and uses up 2 years trying to unify all the titles in the lightweight division? By the time Mikey moves back up to 140, Crawford would be gone, having moved up to 147. There would only be Indongo to fight, and that wouldn’t be a big match-up for Garcia at that point. The time to fight someone like Indongo or Crawford is right away in 2017.

“I don’t care about being an underdog. I don’t make my money off that,” said Broner.

Broner seemed upset at today’s press conference. I don’t think he likes it that he’s being dismissed as the victim for Garcia. Broner had to have known that he would be overlooked as the underdog when he first signed the contract. The boxing public and the odds-makers can’t go off of what Broner once was 6 to 8 years ago. They approach the fight in a rationale way, saying ‘what have you done for me lately? Unfortunately for Broner, we’ve seen what he’s done lately in struggling against Adrian Granados, and looking bad in fights against Ashley Theophane and Shawn Porter.

Broner hasn’t been fighting at a high enough level for him to be taken seriously by the boxing fans and the bettors. They would be crazy to see Broner as the favorite in this fight even his recent history. Mikey Garcia has the hot hand right now in the sport. Just how much longer Mikey can stay at the top is the important question. For all we know, Mikey may be exposed when/if he faces the winner of the Crawford-Indongo fight. Maybe we’ll see Broner expose Mikey on July 29. Given how Broner has looked in his recent fights, I’m not counting on that happening. Mikey is the better fighter right now.

The only thing we don’t know is how well he’ll adjust to moving up to light welterweight and taking on a heavier guy. Mikey hasn’t been fighting opposition with the frame, power and experience that Broner has going for him. We’ll have to see whether Mikey is able to rise to the occasion in fighting a bigger guy that can possibly stand up to his big shots. If Broner can take Mikey’s best shots on July 29, then we could have a real fight.

Mikey will then need to prove that he can take Broner’s best shots for 12 rounds. It could be a war. If it goes the full 12 round distance, one or both fighters are going to take a lot of punishment. Broner can throw more punches than Mikey. That’s an area of concern if you’re a Garcia fan. Garcia is a counter puncher, who is mainly looks to land big single shots to score knockouts. If he can’t get Broner out of there, he could be in for a hard fight.