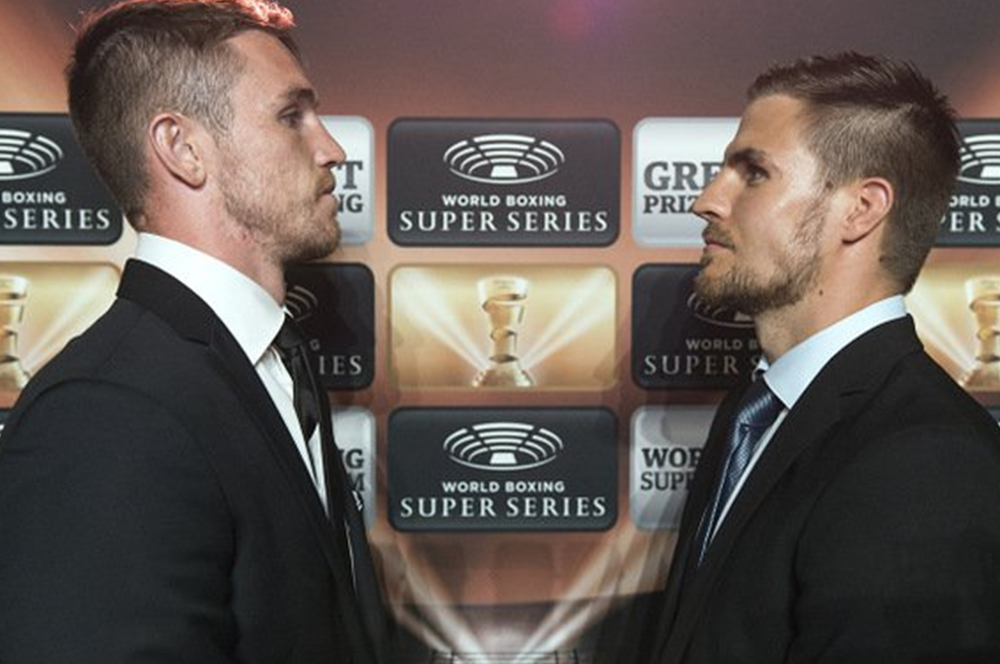 The Saul Canelo Alvarez vs. Gennady “GGG” Golovkin fight will have a lot of competition for viewers on September 16 due to a couple of important fights taking place on the same evening with Erik Skoglund facing Callum Smith and Billy Joe Saunders defending against Willie Monroe Jr.

These fights obviously won’t be taking place at the same time as the Canelo-Golvokin fight, but never the less, it’s not a good deal for them due to the distractions those fights will present.

Super middleweights Skoglund (26-0, 12 KOs) and Callum Smith (22-0, 17 KOs) will be battling in the World Boxing Super Series (WBSS) on September 16 at the Echo Arena in Liverpool, England. Smith, 27, and the 26-year-old Skoglund will be meeting up in the quarter final of the WBSS. There’s a lot of money to be won for the final winner of the WBSS.

Smith has a very good chance of winning the tournament if he can get past his main completion George Groves and Chris Eubank Jr. I have Callum Smith as the favorite to win the tournament. Juergen Braehmer is also taking part in the tournament. It’s unclear how much the 38-year-old Braehmer has left in the tank at his age. I wouldn’t be surprised if Braehmer pulls off some upsets along the way.

Smith will have the hometown advantage against Sweden’s Skoglund on September 16. I don’t know that it matters all that much. Smith would likely beat Skoglund even if the fight were staged in Sweden.

There’s a huge difference in punching power between the two fighters. I don’t think it really matters where the fight is staged. Smith would always be the favorite to defeat a light puncher like Skoglund.

It’s too bad the Golovkin vs. Canelo fight can’t be rescheduled for a different date other than September 16. But I have a feeling that even if Golovkin-Canelo was rescheduled, the promoters would look to quickly schedule their fighters to fight on the same date due to the huge interest in boxing for whatever date Canelo and GGG are fighting on.

WBO champion Billy Joe Saunders defends his belt against #5 WBO Willie Monroe Jr. on September 16 at the Copper Box Arena in London, England. The only reason Saunders is facing Monroe Jr. is because #2 WBO David Lemieux was coming off of a shoulder injury and he couldn’t get back in the ring by September to face Saunders. That was clearly a lucky break for Saunders, as he would have had problems with the punching power of the talented Lemieux. I don’t think Saunders would have beaten Lemieux. Monroe Jr. is going to be a big problem for Saunders. I don’t think Saunders is going to win that fight, especially if he runs out of gas after 5 rounds like he’s been doing.

“Come September 16, he’s going to have to prove that,” said Monroe Jr. about Saunders, who has been doing a lot of trash talking lately about how he’s going to win the September 16 fight. “I’ve never been a talker. Come fight night, I show up.”

“Absolutely,” said Monroe Jr. when asked if he wants to fight the winner of the Canelo vs. GGG fight. “With the politics of boxing, you never know; they may throw Lemieux at me or Danny Jacobs. They may try and throw something in there, because they don’t want to deal with that style. I would be a dangerous curveball for them [Canelo or Golovkin]. They’ll do what they’ve been doing; get in the media and minimize me. So, they don’t got to fight me. It’s definitely put some fire under me with him running his mouth the way he did. He made it kind of hard on himself, but it’s boxing. It’s easy work,” said Monroe Jr. about Saunders.

With all these fights taking place on the same day as Golovkin vs. Canelo, it’s going to be a confusing mess. If that wasn’t all, Floyd Mayweather Jr. vs. Conor McGregor is taking place 3 weeks ahead of the Canelo-Golovkin fight on August 26. That fight is going to cost a mint for the boxing public. It goes for $89 to $99 on Showtime PPV. Many of the fans might not be eager to pour another $70 to see Golovkin and Canelo fight after they finish ordering the Mayweather-McGregor fight. The fights are too close together. Additionally, there might be some angry boxing fans feeling ripped off from the outcome of the Mayweather vs. McGregor fight if it doesn’t wind up being entertaining.

Will those fans be willing to purchase the Golovkin vs. Canelo fight? If the fans are angry about the lack of entertainment in the Mayweather and McGregor event, they could take it out on the Golovkin and Canelo fight by not ordering it. It’s too bad that Canelo-Golovkin isn’t taking place before the Mayweather-McGregor fight, because that’s the better fight on paper. Those guys might not be as popular as Mayweather and McGregor, but they do have the better fight. McGregor is a great MMA guy in the UFC, but he’s making his pro debut in boxing against Mayweather. That’s bad news for McGregor and it could be a horrible event for the fans that will be paying to see the Mayweather-McGregor fight.