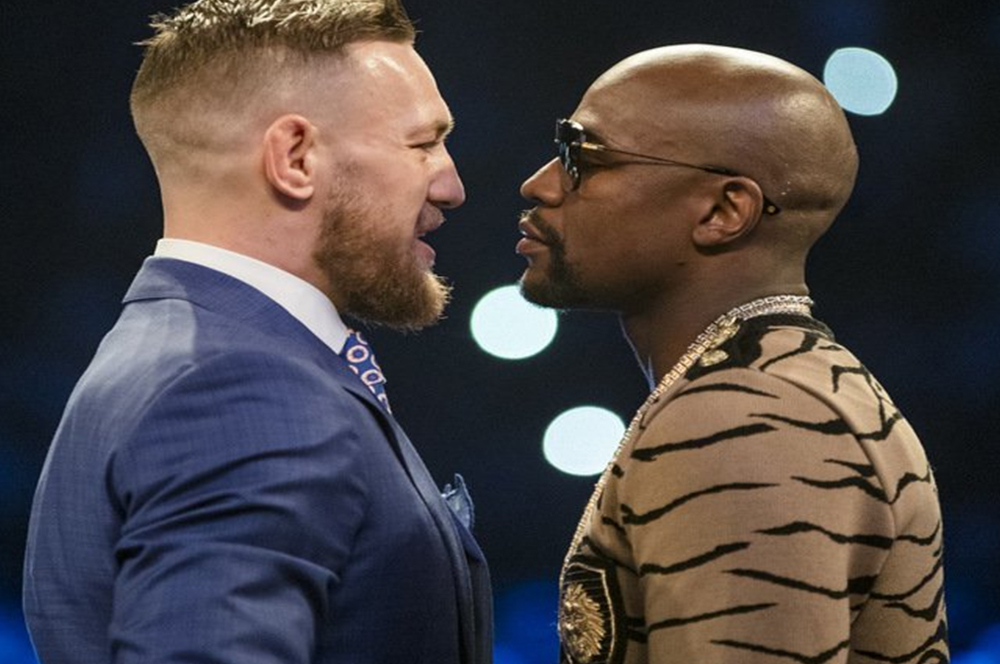 Rios thinks that if McGregor is having problems sparring with the large 14 oz. gloves, then what’s going to happen when he gets hit with 8 oz. gloves. Of course, McGregor would likely counter that he’s been hit with 4 oz. gloves in his fights in the octagon in the UFC. McGregor has already suggested that Mayweather, 40, wouldn’t hold up long in getting hit with punches from the fighters wearing light gloves.

“I’m looking forward to Floyd coming out with a victory by a knockout,” said Jessie Vargas to Villianfy media about the Mayweather-McGregor fight. “Conor is going to get knocked out in 6 or 7 rounds. I have no doubt. It’s a 99 percent win. It’s only 1 percent that Conor can land that lucky punch. He got knocked out in sparring already. The boxing world is small,” said Vargas.

Mayweather hasn’t knocked anyone out in so many years. It’s hard to entertain the idea of him knocking out a guy with as much size and power that McGregor has. Mayweather hasn’t fought in 2 years, and he’s old at 40, and a lot smaller than McGregor. If Mayweather gets clobbered by McGregor while going for a knockout, it’ll be over. Mayweather played it safe in a huge way in his last 4 fights against Andre Berto, Manny Pacquiao and Marcos Maidana. Those fights stretch out 2 years. Mayweather wasn’t taking any chances against Saul Canelo Alvarez, Robert Guerrero and Miguel Cotto.

The last time Mayweather knocked anyone out was his cheap shot knockout of Victor Ortiz. I don’t know how the fight could have been ruled a knockout. It looked like a cheap shot to me. I don’t think Mayweather deserved to be given credit for the way he knocked out Ortiz. I think it was a bad move for boxing for Mayweather to show poor sportsmanship by hitting Ortiz right after he had hugged him to apologize for head-butting him.

I don’t know if I buy what Vargas is saying about McGregor having been knocked out in sparring for the Mayweather fight. I have a hard time believing it. As popular as McGregor is right now, I think it would be impossible for the sparring partner that takes part in the sparring to keep his mouth shut about him knocking McGregor out if that actually took place. People inside the gym that witnessed McGregor being knocked out would surely spread the news like wildfire, which wouldn’t be good for the promotion of the event. That’s why I doubt that McGregor has been knocked out. He likely his sparring partners keeping the information about what happens in the sparring sessions top secret. It wouldn’t be good if the news from the sessions leaked out to where everyone could hear about it.

I get the impression that there are a lot of people in the boxing world that aren’t happy with McGregor taking on Mayweather. McGregor is seen as the outsider, the MMA guy, who is too cocky for his own good. His personality and his bravado is off putting to a lot of people in the boxing world. McGregor is getting the fight against Mayweather that a lot of boxers would love to have. Mayweather would make whoever he fights in boxing a ton of money, even if he hogged most of the revenue from the fight. Mayweather chose an UFC fighter instead of a boxer, which might seem unfair to some.

Former two division world champion Paulie Malignaggi was supposed to have been used as a sparring partner for McGregor, but he still hasn’t heard anything from the Irish fighter. That brings the question of why hasn’t McGregor called Malignaggi. Is McGregor afraid to hire Malignaggi as a sparring partner due to the possibility of him leaking the results of the sparring sessions to the boxing public? Malignaggi is a pretty vocal guy. If he got started talking about what happens during his sparring sessions with McGregor, the whole boxing world would know about it overnight. If the fans hear about how Malignaggi is working over McGregor, then that could kill the PPV sales for the Mayweather-McGregor fight. The PPV costs are is extremely high for the fight with it going for $89 to $99. Having Malignaggi talk about his sparring with McGregor in a daily diary format on his Twitter account would be bad news for the fight. All of Malignaggi’s many followers would send that information all around the internet, and that would likely have an inverse effect on the PPV numbers for the August 26 fight.

“I haven’t done any work with Conor,” said Malignaggi to Fighthub. “They’re done a lot of talking as far as being in, but I’m not sure if they will. It’s up to them, really. It’s not up to me. If they want to bring me in, we’ve spoken. If they do they do. It doesn’t matter. It’ll be there ringside either way, a fight of this magnitude. I wish both guys the best. It’ll be entertaining,” said Malignaggi.