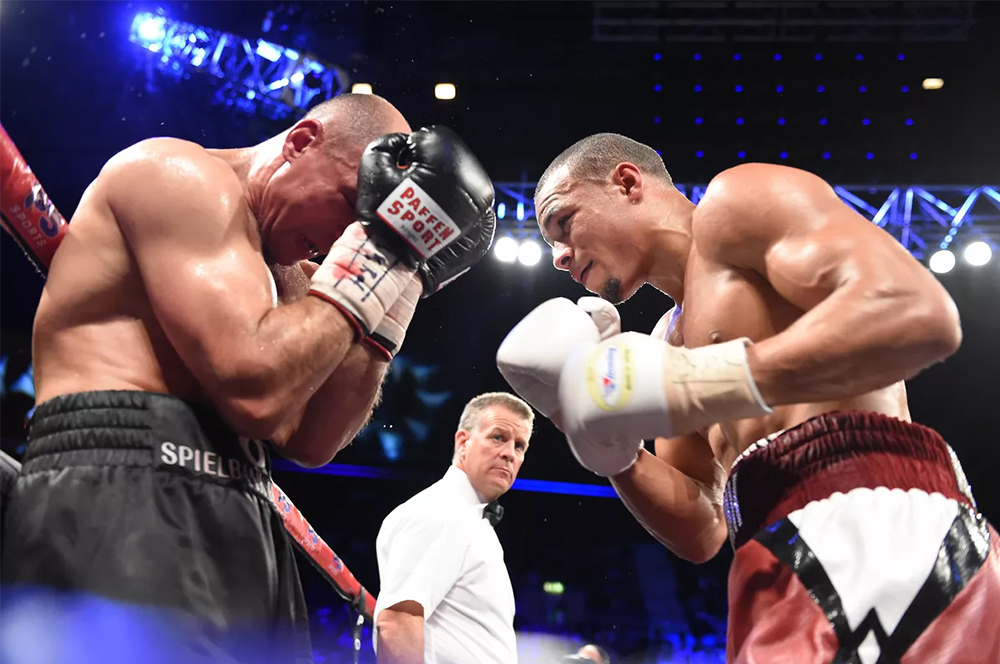 Eubank Jr. let his foot off the gas in the 11th and basically gave away the last 2 rounds of the fight. Abraham took a hard uppercut in the 1st round that bloodied his nose. There wasn’t much to see in the opening round from either fighter. You can argue that Abraham might have done enough to win the round based on a big right hand that he nailed Eubank Jr. with.

It’s interesting that Eubank Jr. chose not to give Abraham any credit after the fight for going the distance with him and landing a lot of hard shots. Eubank Jr. didn’t do as good a job beating Abraham as Gilberto “Zurdo” Ramirez did last year. Ramirez dominated Abraham without getting hit. Eubank Jr. got hit a lot tonight with some really hard shots to the head.

In round 2, Eubank Jr. teed off on Abraham after he backed up against the ropes. The 27-year-old Eubank Jr. nailed Abraham with a number of uppercuts that had his face red and his nose bleeding.

Abraham landed the better shots in round 3, which caused Eubank Jr. to talk to the crowd to try and save face after getting caught with a big shot. I gave that round to Abraham because he landed the bigger punchers.

In the 4th round, Eubank Jr. had his way against the stationary Abraham in landing a flurry of punches on two separate occasions after the German fighter covered up like a sparring partner against the ropes. It looked like Abraham didn’t have the conditioning to fight hard during the round, so he just covered up like a sparring partner. In the last 20 seconds of the round, Eubank Jr. ran around the ring to keep from getting hit by Abraham. It was ugly to watch, and caused a lot of the boxing fans in the Wembley Arena to boo. Eubank Jr. was not fighting like Gennady Golovkin. He was fighting more like Floyd Mayweather Jr. with his safety first way of stalling out a round.

Abraham landed the far better shots in the 5th. You can make a good argument that Abraham deserved the round due to the monstrous punches he nailed Eubank Jr. with. However, Eubank Jr. landed a lot of lighter shots, and he connected with more of his punches. If you were to score the round based on who landed the harder, cleaner punches, you’d have to have given it to Abraham.

The 6th round saw Abraham once again land the harder shots. Eubank Jr. wasn’t busy in this round. This was a clear round for Abraham. But with the way the three judges were putting rounds in the bank for Eubank Jr. throughout the fight, they likely gave him this round as well. I couldn’t. It was obvious that Abraham landed more shots the much harder blows. Eubank Jr’s punches in the round were getting picked off on the elbows and gloves of Abraham.

Eubank Jr. turned his back on Abraham and walked away from him during the 7th round in what appeared to be a showboating move. it was lucky for Eubank Jr. that Abraham was playing it nice with him, because a lot of fighters would have brained Eubank Jr. once he turned his back.

In the 9th, Eubank Jr. spent a lot of time showboating and talking to Abraham. Eubank Jr. would throw a punch and then freeze in a pose after throwing the shot. This was the same kind of thing that Eubank Jr. used to do earlier in his career. It led to him losing to Billy Joe Saunders in 2014. Eubank Jr. spent so much time posing and not throwing punches, that he was outworked by Saunders. I guess Eubank Jr. hasn’t learned his lesson yet. Hopefully, he doesn’t pull that move in the World Boxing Super Series tournament, as he’ll get clobbered by the likes of Callum Smith and George Groves.

The 10th round saw Eubank Jr. using more clowning with him ducking really low, trying to bait the discouraged Abraham to throw a punch at him. By that point in the fight, Abraham had pretty much given up trying to win the fight. He was just covering up and moving around the ring. Abraham was doing very little. It looked cruel on Eubank Jr’s part for him to be taunting his beaten foe the way he was doing. Taunting has it’s place if the fight is competitive, but this one wasn’t. It was a mismatch between a younger high volume puncher and an aging old lion in Abraham.

In the 11th, Abraham caught Eubank Jr. with a tremendous left hook to the head while he was clowning around. Eubank Jr. then attacked Abraham with a flurry of arm punches, missing most of them and landing only a couple. I scored the round for Abraham, because he landed the harder shots. Eubank Jr’s arm punches lacked power, and many of them were being blocked on the forearms of Abraham.

The 12th round was a close one. You could score it to either fighter. Eubank Jr. landed more punches, but his shots had little power on them compared to Abraham’s.

Abraham was a stationary target for Eubank Jr. throughout the contest, making it an easy fight for him. Eubank Jr. didn’t show much in the way of variety in terms of his punch assortment. We saw a lot of the same uppercuts from Eubank Jr. that he kept throwing repeatedly at the stationary Abraham throughout the fight. If Abraham had any sense, he would have stayed in the center of the ring and nailed Eubank Jr. when he would throw his uppercuts.

The reason why Eubank Jr. was able to get away with throwing uppercuts one after another was because of Abraham’s terrible stamina. Abraham is too old at this point in his career to fight had for more than a small portion of each round. You can argue that’s why Eubank Jr. was so anxious to fight him. Eubank Jr. didn’t want to fight Gennady “GGG” Golovkin or Billy Joe Saunders when those fights were offered to him in 2016. Instead, Eubank Jr. went after the IBO super middleweight title against Renold Quinlan. It was a strategic move on Eubank Jr’s part, and he got an old fighter in Abraham to defend the IBO strap against tonight instead of fighting Golovkin or Saunders.

Eubank Jr. showed a lot of volume punching in outworking the 37-year-old Abraham with a massive amount of shots. Eubank Jr. threw a ton of uppercuts each time he would back Abraham against the ropes. Abraham fought a dumb fight by backing up against the ropes and just covering up with his clam-shell high guard. The reason Abraham did this was because he didn’t have the stamina to fight for the full three minutes of every round. Abraham never did have great stamina even earlier in his boxing career, but he definitely can’t fight hard for more than 30 seconds of every round at this point in his career. Abraham’s stamina issues made it easy for Eubank Jr. to unload on him in a way that he wouldn’t be able to do against the likes of Callum Smith and George Groves in the World Boxing Super Series.