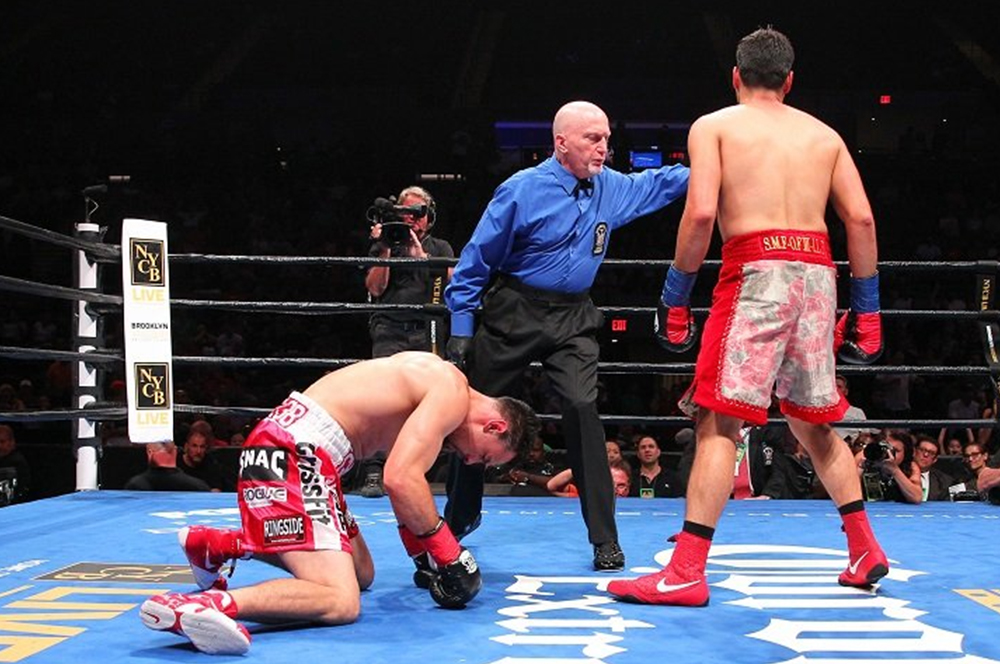 The 27-year-old Figueroa Jr. knocked Guerrero down an incredible 5 times in the fight in dropping him three times in round 3 and two times in round 3. The finishing shot from Figueroa Jr. was a hard left to the body that sunk the badly hurt Guerrero to the canvas. Referee Ron Lipton then stepped in and stopped the fight at 1:30 of round 3.

The defeat for Guerrero was his 5th in his last 7 fights. One of Guerrero’s wins during the last 2 years, a victory over Aaron Martinez, can arguably be called a defeat as well. Guerrero was down in that fight. Whatever the case, it appears that it’s time for Guerrero to hang up the gloves.

You hate to take away credit from Figueroa Jr. for his win, but he would have had major problems if he’d been in the ring with a good welterweight with a chin, power and some common sense. Guerrero fought a really dumb fight by staying in close and slugging with Figueroa. Guerrero often had his head pointing in the opposite direction of the shots that Figueroa was hitting him with. That made the punches even more powerful.

Figueroa kept catching Guerrero with big uppercuts on the inside that he didn’t see, and that made the punches much more powerful than they should have been. It looked like Guerrero didn’t do his homework to figure out how to beat Figueroa Jr. The way to beat Figueroa Jr. is to stay on the outside and jab him and throw single shots. Guerrero didn’t take advantage of his height and reach advantage in the fight. He was fighting Figueroa’s fight the entire time by staying in close.

Guerrero stayed down until the count of 9 before jumping to his feet. He barely beat the count. Guerrero went right after Figueroa Jr., hitting him with powerful shots to the head and body. It looked like for moment that Guerrero was going to rally and knockout Figueroa Jr. Unfortunately for Guerrero, Figueroa Jr. took his best shots, and answered back with another big uppercut that put him down for the second time in the round.

Guerrero didn’t look as hurt in this knockdown. It was a short punch that he didn’t see that put him down. Guerrero continued to slug with Figueroa Jr. instead of holding him or using movement. That would prove to be a mistake, as Figueroa Jr. nailed Guerrero with a hard right hand to the head that dropped him in the closing seconds of the round. This time Guerrero was really hurt. There was no mistaking the fact that Guerrero was on the verge of being knocked out if there was more time left in the round.

Guerrero staggered to his feet, and the round ended before Figueroa Jr. could finish him off. If there was a little more time left in the round, Figueroa would have put the coup de grace on Guerrero and stopped him. Referee Ron Lipton gave Guerrero a huge break by not stopping the fight after the third knockdown in round 2, as could barely stand. Guerrero’s legs were gone and he looked punch drunk.

In between the 2nd and 3rd rounds, Guerrero’s trainer/father worked feverishly to try and get him ready for round 3. Guerrero came out fast at the start of the third round, and he immediately attacked Figueroa Jr. with powerful shots that drove him to the ropes.

Guerrero laid into Figueroa with shots that would have knocked a lot of fighters. To be sure, Guerrero isn’t a big puncher, but the shots he was throwing were hitting Figueroa Jr. flush to the head and body. Figueroa Jr. wasn’t blocking anything that Guerrero was hitting him with. That made Guerrero’s shots look a lot more devastating because he was hitting a punching bag for intents and purposes.

Never the less, Figueroa Jr. once again nailed Guerrero with a big uppercut to the head that put him down for the fourth knockdown of the fight. Guerrero was very hurt. There was too much time for Guerrero to survive the round unless he held Figueroa Jr. or used movement to evade him. That’s not Guerrero’s style though. He didn’t do either of those things, and he paid a heavy price, as Figueroa Jr. nailed him with a hard left to the body that put him down on his knees. At this point, referee Ron Lipton had seen enough and he immediately called a halt to the fight. It was a game effort from Guerrero, but he was unable to get handle the big shots that Figueroa Jr. was hitting him with on the inside.

After the match was over, Figueroa Jr. said he wants to try and get back down to 140 to fight in that weight class. That would be wise for Figueroa Jr. to do that, as he’s not going to do well against the top 147 lb. fighters like Keith Thurman, Errol Spence Jr., Shawn Porter and Danny Garcia. Those guys are bigger punchers than he is, and they’re not as easy to hit as Guerrero.

Porter likes to fight on the inside, but he’s dangerous in close. Figueroa Jr. would have a lot of problems against a guy like Porter. Figueroa Jr. looks like a pretty good fighter. However, he’s not going to be able to do much as long as Terence Crawford is at 140. Once Crawford moves up to 147 to campaign at welterweight, Figueroa Jr. might have a chance against guys like Julius Indongo. I don’t like that match-up for Figueroa Jr. Indongo fights on the outside, and he’s tall, powerful and he fights out of the southpaw stance. I don’t think Figueroa Jr. would do well against him.