Brook: Spence has to drag the title from me
Boxing 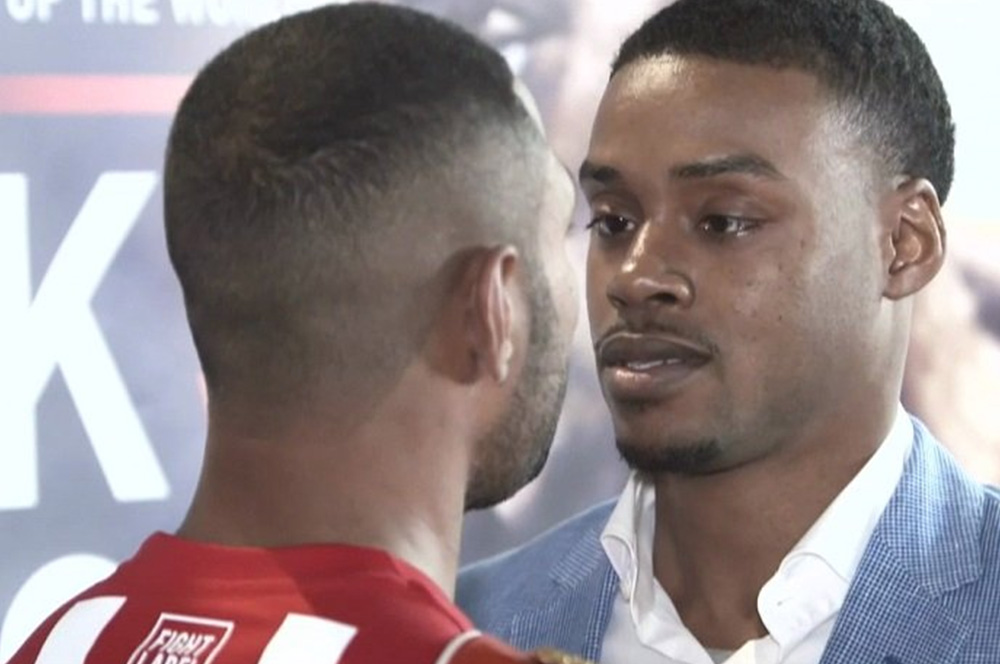 Kell Brook (36-1, 25 KOs) has got a lot of hard work in store for him next Saturday night in trying to retain his IBF welterweight title against Errol Spence Jr. (21-0, 18 KOs) on May 27. Brook’s promoter Eddie Hearn tried to talk some sense into him by suggesting that the 31-year-old Brook vacate his IBF 147 lb. title and move up to 154 and try his hands at fighting in the junior middleweight division.

Brook didn’t want to listen to his wise promoter. Instead, Brook has dug in his heels, and is going to try and defend the IBF title against what could be the most talented welterweight in the division. Max Kellerman of HBO believes Spence could be the best fighter in the 147 pound division, and I happen to agree with him. Spence is the best. Even if Brook was the second best welterweight in the division, he’d be in for a lot of problems on Saturday night against the talented Spence.

I don’t see Brook as No.2 or even No.3 at 147. If Brook is going to send the 27-year-old Spence down to defeat next Saturday, then he’s going to need to fight over his head. The one thing that Brook will have going for him is the hometown advantage. As I’ve pointed out before, Brook will be fighting in his backyard at the Bramall Lane in Sheffield, England.

There will be 30,000 Brook fans out there screaming for him. Brook has never fought in front of that many supporters and it could help him out if he doesn’t get knocked out. That’s problem. Spence has got the power, talent and size to destroy Brook, especially if he gets brave on Saturday.

Brook beat the 5’7” Shawn Porter by a 12 round majority decision 3 years ago in 2014 to win the IBF title. It’s hard to believe that Brook has been a world champion for 3 years, because he’s done so little as the IBF champion. Normally the welterweight champions get big fights fairly easily. That hasn’t been the case with Brook. His fights have been small-time ones against Frankie Gavin, Jo Jo Dan and Kevin Bizier. You would think that Brook would at least have fought someone like Keith Thurman or Danny Garcia during his three year as the IBF champion instead of the easy guys that he feasted on.

”I’ve got titanium in my eye and it’s as strong as steel,” said Brook about the titanium plate the surgeon inserted in his broken right eye socket. ”I’ve had no problems with it in sparring.”

Just because Brook has been sparring without suffering a setback with his surgically repaired right eye socket doesn’t mean that it won’t have problems when he gets out there on Saturday against Spence. If you look at the clips of Brook’s sparring with Jamie Cox, he was wearing head gear that protected him from getting hit directly on his right eye. With the head gear that Brook used during training camp, it’s not surprising that he didn’t get hurt again. It’s going to be a different situation when Brook gets out there with Spence without the head gear. If Brook’s right eye isn’t fully fixed, I think it’s going to end badly for Brook.

These are the potential 5 things that could go wrong for Brook against Spence:

– Brook’s surgically repaired right eye could swell up and close almost immediately once he starts getting hit by Spence on that area.

– Running out of gas due to his struggles making the 147 pound limit.

– Spence being too powerful for him.

– Spence being too big for Brook.

The boxing public doesn’t view the Brook vs. Spence fight as a 50-50 affair. Brook’s trainer Dominic Ingle might see it as even fight, but the fans and the odds-makers see Brook as the underdog. I think it would be better for Ingle to see this fight as it really is rather than him trying to sugarcoat it by calling it an even fight.

Ingle says that Spence has a chance because of Brook having lost his last fight against Gennady Golovkin, and having to subsequently drop weight from middleweight to get back down to welterweight. Ingle isn’t giving Spence much credit by him saying those are the only reasons why Spence could win. Those reasons obviously are important ones, but I don’t see those as the main reason why Brook could lose to Spence. The main reason is because Spence is the more talented of the two in my opinion, and he has a lot of advantages over Brook.

These are the 5 reasons why Spence can win on Saturday:

– Spence is the younger fighter at 27 compared to the 31-year-old Brook.

– Spence is taller and faster.

– Brook’s recent eye injury. There could be residual damage to the eye.

– Brook having to lose a lot of weight to get down to the 147 pound limit to defend his title against Spence. That’s not going to be easy for Brook to do.

– The huge pro-Brook crowd at Bramall Lane could encourage Brook to be too brave for his own good against Spence. You don’t be brave if you’re Brook fighting a talent like Spence because he’s dangerous. This is a fight where Brook needs to be careful inside the ring against Spence because he hits too hard and he could knock Brook out if he tries to get brave inside the ring. If the large crowd whips Brook into a frenzy like the boxing fans did in his last fight against Gennady Golovkin at the O2 Arena in London, England, then this fight could end badly for Brook. We saw what happened to Brook when he got brave against Golovkin. He got his eye socket broken. If Brook gets bold against Spence on Saturday, he could suffer some other kind. This is the 21st century. Brook can’t use a Rocky type of approach against a skilled fighter like Spence and expect to win.

“If you want the title, you have to drag it out of my hands,” said Brook. “That’s what Errol Spence has to do. He’s got to come in and take it away. I believe it’s going to be my toughest fight. There’s going to be a lot of drama in this fight. We might even touch the floor. I feel like I’m going to go in there and execute and get the win and retain that world title belt,” said Brook.

Spence might just drag the IBF belt from Brook’s hands on Saturday night. If Brook doesn’t fight smart, he’ll have no chance at all against Spence. The game plan that Brook used against Gennady Golovkin is one that will not work against Spence. Using a hit and run approach against Spence is not a winner. Further, Brook can’t use the old punch and grab technique that he employed against Shawn Porter because Spence is already aware of that plan and he’s been working on a mechanism to defeat that tactic.

Shawn Porter had no clue that Brook was going to hold him all night long in their fight in 2014. Porter that Brook was going to fight with him like he’d done against the guys he’d been padding his record with during his career. It’s too bad Porter didn’t ask me about Brook because I would have given him the straight scoop by letting him know that he can expect to be held like mad for 12 rounds by Brook.

I’d seen too many of Brook’s fights where he’s faced guys that landed some shots on him. When Brook gets hit, he starts grabbing and doesn’t let go for nothing. Spence and his trainer Derrick James have covered every possible fight strategy that Brook could possibly dream up for this fight, and they’re ready for him. If Brook beats Spence on Saturday, he’ll have to do it the old fashioned way by beating him at his own game by standing in the pocket and trading with him, because that’s the only thing that Brook can try and do to beat Spence.

“My slogan is ‘Man down.’ That’s what I try to do every time I come to the ring. Kell Brook knows what time it is. We got to get in the ring and fight,” said Spence.

Spence is looking at this fight as a knockout performance for him. Spence wants to win this fight and also shine in the process. You’re not going to see Spence making fun of Brook inside the ring on Saturday. He’s going to be all business when he goes out there on a seek and destroy mission.