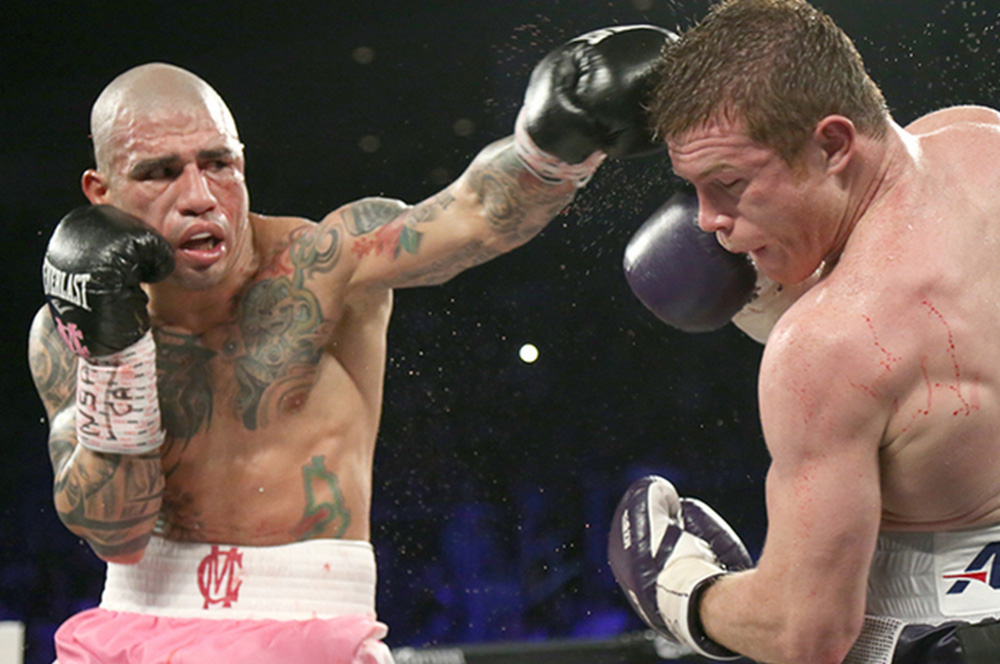 Inactive former four division world champion Miguel Cotto has reportedly parted ways with his promoters at Roc Nation Sports after just 2 fights with the company. According to Dan Rafael, Cotto and Roc Nation couldn’t agree on the amount of money the soon to be 37-year-old Cotto would get for his fight against Japanese fighter Yoshihiro Kamegai (27-3-2, 24 KOs). That fight was supposed to have taken place on June 24. It’s not going to happen now though. There were several venues that were being considered for the Cotto-Kamegai fight in Puerto Rico, Miami and Frisco, Texas.

Cotto had a scheduled fight against former junior middleweight contender James Kirkland fall though for February 25 after Kirkland suffered a broken nose in training. Cotto-Kirkland was supposed to have been televised on HBO PPV. There was a great deal of criticism from the boxing public about that fight, as many of the boxing fans that Kirkland was not good enough opponent for Cotto to be fighting on HBO PPV. Kirkland had been knocked out in his previous fight by Saul Canelo Alvarez in 2015 and hadn’t fought since then. The fans bristled at the thought of being charged to see Cotto fight a guy that had been out of action for over a year since his knockout loss to Canelo.

It’s unclear how much Cotto was hoping to get against the 34-year-old Kamegai. A source for ESPN said Cotto wanted “way more money” than what Roc Nation was willing to offer for that fight. It was a very small fight. Cotto’s name would have interested some of the hardcore boxing fans, but his opponent was a virtual unknown.

Cotto is at the stage in his career where he’s too popular to be taking tune-ups like that. He needs to be only in the most important fights against the very best in boxing, even if he’s not fighting a popular guy. It’s hard to imagine Cotto getting a lot of money to such an opponent because Kamegai is little more than a high level journeyman at best with three defeats in the last 4 years along with one draw. HBO Boxing is said to have turned down the Cotto-Kamegai fight. Acording to Rafael, HBO would have televised the Cotto vs. Kamegai fight if there would be a significant fight for Cotto in his next fight, but there wasn’t anything on tap.

Juan Manuel Marquez and Tim Bradley were two of the fighters that Roc Nation was hoping to get for Cotto. Unfortunately the fights couldn’t be put together. What the ultimate sticking point in the negotiations with those two fighters is unknown. Those are well-known fighters, and they’re quite used to getting nice paydays. However, with Cotto and both of those fighters being inactive for such a long time, it would be difficult to imagine the boxing public having much interest in those fights, especially if they were on PPV.

Bradley hasn’t fought since April of 2016. Marquez has been out of the ring for almost 3 years since 2014. Cotto vs. either of those fighters would have made more sense in 2014, but not now at this point. Cotto needs to be fighting the top fighters of this era such as Jermell Charlo, Keith Thurman, Danny Jacobs or Gennady Golovkin. Cotto is in a tough situation though with him having been out of the ring for such a long time.

Cotto was beaten by Saul Canelo Alvarez by a 12 round unanimous decision in November 2015. The fight was closer than the scores handed down by the judges, who gave Canelo the win by the scores 118-110, 119-109 and 117-111. It would have been smart for Cotto take advantage of the interest in his fight with Canelo to try and get back into the ring as quick as possibly staying out of the ring for all of 2016 including the first 5 months of 2017.

Cotto had been promoted by Top Rank through 2014. Cotto left Top Rank after knocking out Sergio Martinez in June 2014 to win the WBC World middleweight title Since leaving Top Rank, Cotto has had exactly 2 fights with Daniel Geale and Canelo Alvarez. Before the Canelo fight, Cotto’s trainer Freddie Roach had been saying the boxing media that Cotto has improved since being beaten by Floyd Mayweather Jr. and Austin Trout in back to back fights in 2012. However, there wasn’t a good level of opposition that Cotto beat after those losses to say whether he’d improved or not.

Cotto’s wins since joining up with Roach came against journeyman Delvin Rodriguez, an old Sergio Martinez, and a past his best Daniel Geale. Cotto hadn’t beaten anyone really dangerous. Sergio Martinez was no longer the same fighter when Cotto fought him due to a leg injury he had suffered in his 2012 win over Julio Cesar Chavez Jr.

Cotto is expected to retire at the end of 2017. But before then, he could wind up facing Canelo in a rematch in December. A second fight between Cotto and Canelo would likely bring in a fair amount of PPV buys on HBO, even if Cotto chooses to stay inactive until then. There are enough fans from Cotto’s Puerto Rican fan base and Canelo’s Mexican fan base to make a rematch between them a big fight. Canelo-Cotto brought in 900,000 PPV buys on HBO 2015. At the time, Cotto was the A-side and his rejuvenated career was going well with him having recently beaten Sergio Martinez and Daniel Geale in back to back fights. Things will be much different between Canelo and Cotto in a rematch. Canelo will definitely be the A-side simply because he’s been so much more active since the Cotto fight. Canelo has fought 3 times since facing Cotto, and he’s about to fight Gennady Golovkin on September 16. It doesn’t matter if Canelo loses to Golovkin. He’ll still likely be the A-side against Cotto.

Cotto was a good fighter when he fought at 140 and 147. After Cotto moves up to 154, he didn’t really accomplish a whole lot apart from beating old and broken down fighters Antonio Margarito, Sergio Martinez, Ricardo Mayorga, Yuri foreman and Daniel Geale. Cotto fought Mayweather at 154 in 2012, but he lost that fight. Cotto was a far better fighter when he fought at 140 and 147. Cotto’s power was more pronounced in those weight classes. Than it was when he moves up to 154 and ultimately 160.