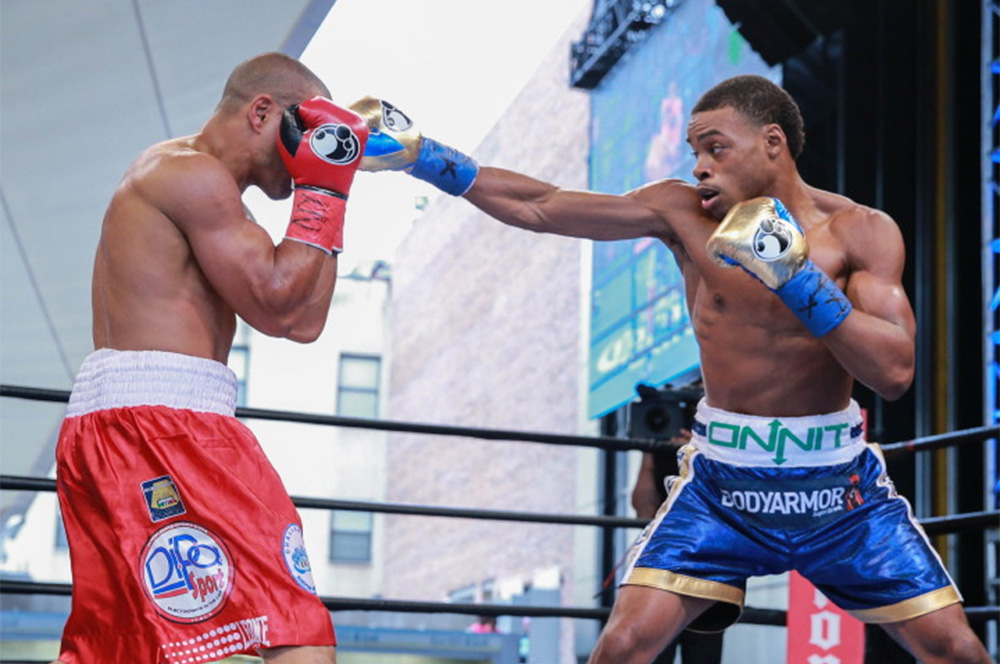 Errol Spence Jr. (21-0, 18 KOs) is ready to take Kell Brook’s IBF welterweight strap from him on May 27 in front of his own fans at Bramall Lane, in Sheffield, England. Spence has done his homework in scouting out a number of Brook’s past fights, including his recent 5th round blowout loss to Gennady “GGG” Golovkin. Spence has seen the flaws in Brook’s game that he feels he can take advantage of.

Spence also watched Brook’s fight against Shawn Porter from 2014 and noticed some things that he can exploit from that fight. Spence isn’t spilling the beans what he noticed from watching those matches, but it’s likely the fact that Brook doesn’t have much of an inside game. Instead of Brook fighting on the inside, he holds on the inside. Hopefully that’s not what we’re going to be seeing from Brook on May 27, because Spence likes to fight in close with his body attacks.

It probably won’t make Brook’s boxing fans too happy to hear Spence saying that the Brook-Porter fight could have gone either way, because many of them believe it was a mismatch with Brook winning almost every round. It’s interesting how different many of Brook’s loyal fans see the Brook vs. Porter fight compared to other fans.

I saw the same fight, and I thought it was a clear win for Porter. Of course, I don’t score rounds for holding someone over and over again like Brook was doing. If winning in boxing involved trying to clinch your opponent into submission, then Brook won the Porter fight hands down. But that’s not how the sport goes. You have to land punches, and you don’t want to hold your opponent because that’s breaking the rules completely.

I hope for Spence’s sake that he knows what he’s going to need to do in order to get the ‘W’ on the night. Taking Brook’s IBF tile from him won’t be as easy as he thinks it will be. I’m afraid that if Spence doesn’t knock Brook out, he may go home the loser on May 27. The fight IS taking place in Brook’s backyard in Sheffield in front of his boxing fans. The crowd at Bramall Lane will likely be 99 percent Brook fans. I wouldn’t be surprised if less than 1 percent of the boxing fans being there to support Spence. What this means is that every punch Brook, 30, throws in the fight will be cheered madly by his fans; whereas the shots that Spence throws will be met with silence. You’ll be able to tell who’s winning the fight if there are long periods of silence from the boxing fans. The fans certainly aren’t screaming their lungs out if Spence is batting Brook around the ring like a baseball for 12 rounds. The fans will put up with it in silence, and perhaps start heading towards the exits early if Brook takes a royal beating like we saw recently with Julio Cesar Chavez Jr. in his loss to Saul Canelo Alvarez.

I wouldn’t be surprised in the least if the Brook-Spence fight winds up just like the Canelo-Chavez Jr. fight. Why do I see it ending up like that?

I see it that way for a number of reasons. Here are the reasons why Brook could lose to Spence in a one-sided manner:

– Brook’s eye injury from his loss to Gennady Golovkin.

– The confidence lost by Brook from his recent beat down in the Golovkin fight.

– Brook hasn’t been fighting the best at welterweight. On May 27, he’ll be fighting by far the best fighter he’s ever faced at 147, and it’s going to be a shock to him. When a fighter gets used to facing just fodder opposition as we’ve seen with Brook, they’re not ready for the upper crust of the division. Without Brook being able to bend the rules continuously like we saw him do in his fight against Shawn Porter, I see Brook being out of his league when he gets inside the ring with Spence on May 27.

”I’m expecting a 100% Kell Brook to come to fight,” said Spence about his belief that Brook’s surgically repaired right eye will be ready for full contact when they face each other at Bramall Lane. ”I’m not expecting an injured Kell Brook. It looks like he’s making his weight pretty good. I have to worry about the best Kell Brook.”

Brook suffered a broken right eye socket in his loss to Gennady Golovkin on September 10 last year. Even though the socket has been surgically repaired and strengthened with a titanium plate, we won’t know if it will hold up under the pounding of a real fight. We won’t know until Spence hits Brook. If there’s any residual damage to the eye, it’ll be exposed at some point during the Spence fight in 2 weeks from now. It would be a catastrophe for Brook if his right eye starts acting up on him during the heat of the battle with Spence.

I can picture Brook being forced to run around the ring to keep from getting hit by Spence for as long as the fight lasts. Obviously with what Brook now knows about the risks that he took fighting with a broken eye socket last the time fought, I don’t think he’ll chance it this time. I see the fight being stopped immediately and Spence crowned the new IBF welterweight champion. It won’t even get to the point where Brook’s trainer Dominic Ingle throws in the towel to save his hide.