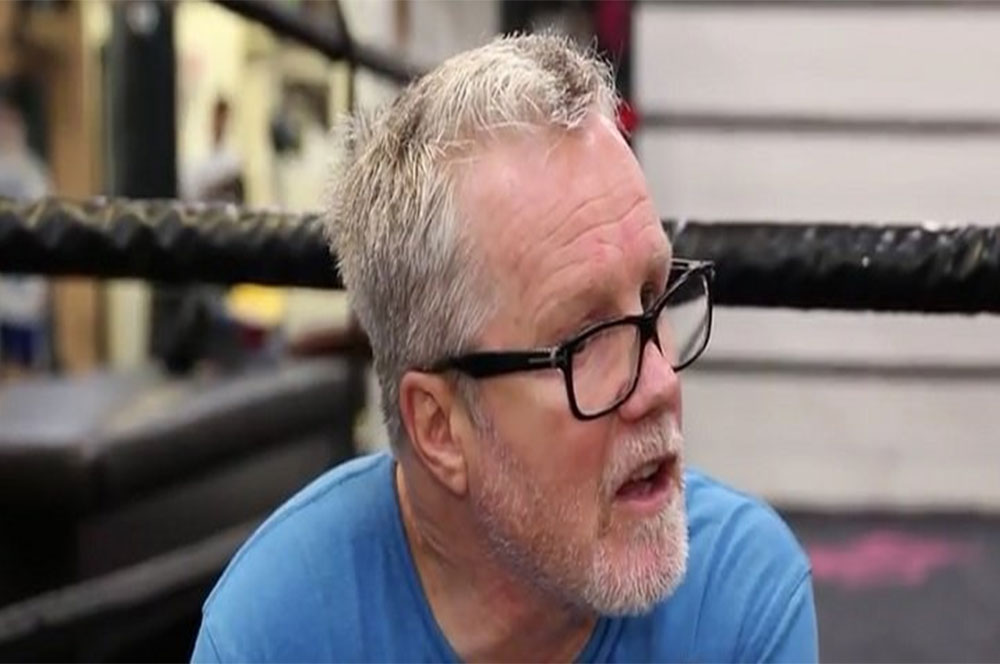 Trainer Freddie Roach says there’s a possibility that former eight division world champion Manny Pacquiao will be facing lightweight champion Mikey Garcia in his second fight of the 2017 after he gets done with his July 2 title defense of his WBO welterweight belt against Jeff Horn. Roach says the Horn (16-0-1, 11 KOs) fight is a tune-up to get the 38-year-old Pacquiao ready for a potential much bigger fight against Mikey Garcia (35-0, 30 KOs).

Roach thinks Pacquiao still has enough left to beat Horns and Mikey. Pacquiao gets hit a lot, as we saw in his recent fight against Jessie Vargas. Garcia has better punching power than the Juan Manuel Marquez that stopped Pacquiao in their fight in 2012. If Garcia is able to hit Pacquiao with his big power shots, he could knock him out cold just like Marquez did. Garcia looked devastating in his knockout win over Dejan Zlaticanin. If Pacquiao faces Mikey like Roach wants, it could be bad for the Filipino fighter. Mikey will be all over Pacquiao hammering him with his big power shots.

Roach is excited at the idea of Pacquiao traveling to Australia to fight the unbeaten 29-year-old Horn in front of 65,000 boxing fans at the Suncorp Stadium in Brisbane. According to Roach, the stadium will be definitely filled for the Pacquiao-Horn fight.

“It looks like out second fight of the year will be Mikey Garcia,” said Roach to Fighthub. “I like the Horn fight to get ready for Mikey Garcia, because it’ll be a little bit of a tune-up, and it’ll get Manny a little bit fresher. It’ll get his mind on boxing a little bit more. Yeah, Thurman is making some noise right now, but he wasn’t impressive in his last fight, so I don’t think it’ll happen. Mikey Garcia has been impressive in his fights, and he’s a tough fight. I don’t know who wins that fight. I think Manny still has enough left to beat him. I’m looking forward to the challenger. I do think Manny can win that fight. He’s very, very difficult. It is a hard fight for both guys. It’s the best fighting the best,” said Roach.

Roach needs to take a wait and see approach when it comes to Pacquiao. He could have a tough time trying to beat Horn in Australia. He’s a 2012 Olympian with good punching power and size. Horn could give Pacquiao all he can handle in this fight. An upset is quite possible. With Horn being one of Pacquiao’s promoter Bob Arum’s fighters, it wouldn’t hurt him as much. Horn would be turned into a big star in Australia, and there’s good money to be made from the PPV for a long time with him.

If Pacquiao has a hard time beating Horn, then it would be a bad idea for him to fight Mikey after that. It’ll be up to Arum if he wants to match Pacquiao against Mikey Garcia. He used to be one of Arum’s fighters. As long as there’s no lingering bad blood between them, then it’s possible Arum could make a fight between Pacquiao and Mikey. The only thing that could get in the way of the fight getting made is if Arum wants to keep putting Pacquiao in with his own Top Rank stable fighters until he retires from boxing in 2017 or 2018. Roach thinks that Pacquiao will keep fighting for another 2 years. We’ll see about that. All it takes is one crushing defeat for the Filipino star and then I see him retiring off the loss rather than continuing with his career.

“Lomachenko wants a year to get ready for the fight and 2 tune-ups fights,” said Roach.

The Lomachenko fight is obviously a bad idea if he chooses to ask for a lot of time to get ready for the Pacquiao fight. Lomachenko is used to being the A-side in his fights, so he’s not going to give up that status easily. It’s not a fight that would attract a lot of interest from the casual boxing fans because they don’t know who Lomachenko is. He’s still winning over fans fight by fight, and it could take a long time before he’s worth it for Pacquiao to fight.

“I haven’t talked to Bob [Arum] in depth about this fight, but he said it’s definitely a fight that can get made,” said Roach about the Pacquiao vs. Mikey Garcia fight. “After that, maybe [Pacquiao can fight] Crawford. I want to fight the best guys out there. We’d have to beat him [Garcia] to get Crawford. Crawford might be the most challenging style for us at this point. That’s why I want the Garcia fight first. He’s given me the indication this will not be his last year. Manny Pacquiao still has a lot of fight left in him, and he told me he still has a couple of years left. I feel he’ll be the same Manny, because when I left, he was great. If he’s still looking great and does great in the Horn fight, we’ll fight Garcia next. That’s the big fight I’m looking for. The Horn fight is maybe a stepping stone to a bigger fight. I like that because I like the activity for Pacquiao. Activity always kept Manny fresh. Without activity and a tune-up, I’d hate to throw him in a tough fight right away like that,” said Roach.

Roach must be kidding himself if he thinks Pacquiao has a lot left in the tank. In {Pacquiao’s last fight against Jessie Vargas last September, he didn’t look like a fighter that had a lot left in the tank. In my mind, Pacquiao looked like a fading fighter living off of yesterday’s press clippings. Pacquiao didn’t dominate Vargas at all. The fight was fairly close at times. Pacquiao won the fight, but he didn’t shine. You can say that middleweight champion Gennady Golovkin did a better job beating Daniel Jacobs recently than Pacquiao did in defeating Vargas. It was not vintage Pacquiao in the Vargas fight. It looked like a gun-shy Pacquiao, who wasn’t able or willing to take Vargas the way he needed to do. Pacquiao is still a good fighter, but he’s not who he used to be as a fighter.

“The thing is Manny has never been to Australia,” said Roach about Pacquiao’s fight against Jeff Horn. “He’ll draw a lot of people there, I hear. He’ll fill the 65,000 seat arena. Horn is the toughest guy in Australia in his weight division, so we’re fighting the best hometown guy they have, and it should be pretty interesting. I’ve seen some tape on him. He’s not a bad fighter. I think Manny should dominate him. I have to prepare Manny like all his fights. Hopefully, it’s not the end for Manny Pacquiao. I think he still has a lot of fight left in him,” said Roach.

Horn is probably the best fighter in Australian at welterweight, but that doesn’t mean anything. There aren’t a lot of good welterweights in that division. The fight may sellout like Roach says it will, but that won’t matter if Pacquiao loses the fight. As far as Roach saying that Pacquiao will “dominate him,” don’t think that’s going to be the case. Horn is going to give Pacquiao a great deal of problems in this fight, and he could wind up getting a victory. Horn has a good job, and he’s going to watch the Floyd Mayweather-Pacquiao fight in order to learn of ways for him to negate Pacquiao’s attacking style of fighting.

“He still works hard. It’s a big challenge in front of us. He’s the best guy in Australia at the weight,” said Roach. “The Australians seem to want to see a guy like Manny Pacquiao. So they tell me the stadiums seats 65,000, and they expect it to be filled. The Khan fight was in negotiations, but it never came to realizations. The money wasn’t there. The fight in Australia was real, Bob [Arum] told me. ‘Let’s make it happen right now.’ Manny is going on a little road trip someplace he’s never been before. It’ll be really good for the Australians to see Manny Pacquiao perform live against this supposed toughest guy. The thing is the kid can fight a little bit. I’ll get Manny 100% ready for the fight. I’ll talk to Manny. He’s a little bit awkward. He has a little bit strange style. I think Manny should be able to handle it. Being a part time boxer at this point, it’s not the best situation in the world for Manny Pacquiao to be in right now,” said Roach.

Pacquiao will have a hard time regardless against Horn. He might win it, but it’s going to be a tough fight where a lot of boxing fans will probably criticize him afterwards for looking so bad. Horn isn’t a great fighter, but he’s still in his prime a lot younger and bigger than Pacquiao. The most important thing is Horn is a natural welterweight. He’ll have the size advantage over Pacquiao.